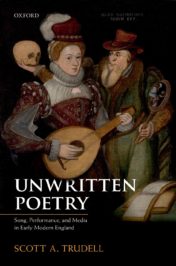 The sexual abuse of children endemic in the Roman Catholic Church is once again in the news, with Pope Francis mandating reporting within the Church. The Catholic Church is not alone; investigative journalists have revealed a pattern of sexual misconduct among Southern Baptist pastors and deacons over a twenty-year period, involving more than seven hundred victims. Secular institutions, including USA Gymnastics and the Pennsylvania State University football program, have also enabled and covered up child sexual abuse.

What can a longer historical view tell us about these patterns of abuse?

For one thing, we can recognize that evidence of child abuse has long hidden in plain sight. Records of the grammar schools, choir schools, and commercial theater companies that trained and employed boys in early modern England are full of casual references to beating. These references are sometimes euphemisms for sex acts, as when Richard Mulcaster was said to jest that his rod “Lady B[i]rch” would enter into matrimony with a boy’s “buttock[s].” Explicit accusations of sexual abuse are rare, but we know that the schoolmaster and playwright Nicholas Udall was convicted of “com[mitting] buggery” with a pupil in 1541, and there is little reason to think that this was a unique instance. Anti-theatrical writer William Prynne claimed that child abuse was routine in the commercial theater: “Players and Play-haunters in their secret conclaves play the Sodomites . . . desperately enamored with Players[’] Boy[s] thus clad in wom[en’s] apparell, so fa[r] as to sol[icit] them by words, by Letters, even actually to abuse them.”

But accusations like Prynne’s cannot be taken at face value. Prynne is a Protestant extremist writing biased, slanderous invective. He is also grouping what we now call child abuse within the amorphous category of sodomy. We cannot know whether accusations of this sort allude to sexual abuse, queer sex acts, or undefined paranoia about sexuality and gender. We cannot even know what exactly Prynne means by “boys”: child actors could be as young as six or seven, but the seventeenth-century children’s companies sometimes retained actors into their twenties.

The challenge for scholars is to contextualize such evidence without ignoring historical realities of abuse. Alan Stewart threads this needle in his book Close Readers, arguing that outcries against schoolroom flogging derive not only from concerns about violence and sex acts but from cultural anxieties about status and social mobility. At the same time, Stewart argues that “the shared secret of the dolorem infandum, the pain not to be spoken” is the consequence not only of a few aberrant schoolmasters but of widespread practices of abuse enabled by the early modern educational system as a whole.

We can detect traces of dolorem infandum in Renaissance drama, including in songs that depict the sexual subjection of children. Songs by William Shakespeare, Ben Jonson, and other playwrights sexualize not only boys playing women but boys playing boys. They are not straightforward evidence of historical practices of abuse, but they do make plain that fantasies of sexual aggression were closely associated with the child singers of the early modern theater. In some cases, such as John Marston’s play What You Will, song becomes a means for children to denounce and excoriate their abusers. More often, children’s songs reference abuse without censure or critique, trading upon the erotic energy invested in virtuosic young vocalists.

It is now taboo to eroticize children in the explicit ways we see in Renaissance drama. As James Kincaid has shown, however, our idealization of childhood innocence has come with its own set of obsessions and desires. Kincaid’s book Child Loving traces these desires back to the Victorian period, arguing that “by attributing to the child the central features of desirability in our culture—purity, innocence, emptiness, Otherness—we have made absolutely essential figures who would enact this desire.” Kincaid’s subsequent book Erotic Innocence shows how fixations upon childhood purity and desirability play out in the sensationalism surrounding child molestation in contemporary American culture.

Accounts of child abuse tend to focus on individual abusers—Larry Nassar, Jerry Sandusky, Cardinal Theodore McCarrick. At the Catholic Church’s recent summit on sexual abuse, Pope Francis described abusive priests as “ravenous wolves” and “tools of Satan” who must be held individually accountable. The risk here is in ignoring the institutional and ideological conditions that make patterns of abuse possible. Scholars of literary and cultural history have begun to trace these patterns back in time, revealing long histories of obsession with child sexuality and institutional complicity in abuse. Further examination of this difficult topic is necessary, both in the present moment and in longer historical context.

Featured image credit: “Bacchanal with infant satyrs and putti” (c. 1633–78) by Giulio Carpioni. CCO 1.0 via The Metropolitan Museum of Art.

Scott A. Trudell is assistant professor of English at the University of Maryland, College Park. He is the author of Unwritten Poetry: Song, Performance, and Media in Early Modern England (Oxford University Press, 2019).