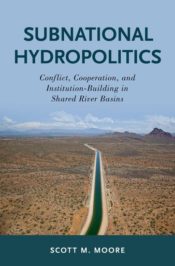 Back in 1995, then World Bank Vice President Ismail Serageldin made an important prediction about the future: “The wars of the next century will be fought over water,” Serageldin warned, “unless we change our approach to managing this precious and vital resource.” Fortunately for the world, Serageldin’s predication has so far not occurred. No wars have been fought strictly over water in modern history. In fact globally the number of international agreements over water far exceeds the number of international conflicts. That paradox shows that water can be just as powerful a driver of cooperation as of conflict between nations, regions, and communities.

But that doesn’t mean Serageldin is wrong.  The world does have a big problem with its most critical resource, and it’s very far from managing water effectively. Broadly speaking, the world faces three major challenges when it comes to freshwater. First, water is unevenly distributed across both space and time, meaning it’s almost never available where and when we want it, and in the right quantity. This problem is just as bad when there’s too much water, causing flooding, as when there’s too little. Moreover, this mismatch is getting worse because of climate change, which in many parts of the world is increasing the frequency of floods and droughts while also making precipitation more variable, and therefore harder to predict.

A second major challenge arises from water quality. What water does exist around the world often isn’t in a state where we it can be used as is; most often, it has to be purified or treated. Around the world, about 800 million people lack access to clean drinking water, and many more lack sanitation facilities. The problem of water pollution, too, is getting worse, for two main reasons. First of all, growing cities around the globe are generating increasing volumes of wastewater, most of which isn’t treated before being released into surrounding waterways. The accumulation of industrial pollutants like heavy metals in groundwater is cause for particular concern, since it’s very difficult to purify. Second, the increasing use of fertilizers and pesticides to boost crop yields causes vast quantities of pollutant runoff, choking streams and rivers. And unlike many side effects of economic growth, water pollution turns out to be pretty egalitarian: heavy metal and nutrient pollution is a major threat to human health in both developed and developing countries.

As complex as the world’s water challenges are, many of them stem from the fact that across the world, water is essentially free.

But it’s the world’s third major water-related challenge that is in many ways the most concerning. What water we do have we use poorly – and that’s true across the globe. A decade after Serageldin made his prediction, a 2004 World Bank report noted that while most experts agreed on what steps needed to be taken to manage the world’s water more effectively, virtually no country had done so. Another fifteen years later, the situation isn’t much different. But we do have some examples of where countries have succeeded in making water use more sustainable. As is so often the case, the solutions are economic – but the issues are political.

As complex as the world’s water challenges are, many of them stem from the fact that across the world, water is essentially free. There are very few places in the world where users pay anything close to the total cost of withdrawing, transporting, and purifying water, to say nothing of environmental and other externalities – meaning there’s little reason for individual water users to think about not using that last cubic meter. Adam Smith once observed that while water is about the most valuable commodity there is, hardly anyone values it, while things that are essentially useless, like diamonds, fetch enormous prices on the market. This paradox of value still obtains, and it means that the world’s water won’t be used effectively unless people learn to value it more highly. More people are going to have to pay more, in some cases much more, for the water that they use.

Of course, water being water, it’s not quite as simple to just raise the price of water. Everyone needs a certain quantity of water just to live, and there are obvious benefits to clean water that are hard to capture in a single price. These ethical issues are why it’s proven so difficult to put a price on water, and to use it effectively.

But going forward, we may not have much choice. Cooperation is more likely than conflict over water – and yet it’s not inevitable. There’s only so much water on Planet Earth, and we have to find some way short of warfare to use it equitably, efficiently, and sustainably.

Scott Moore is a scholar and policymaker focused on environmental issues, especially water resources, climate change, and oceans. He is the author of Subnational Hydropolitics: Conflict, Cooperation and Institution-Building in Shared River Basins. Scott currently serves as a Senior Fellow of the Kleinman Center for Energy Policy at the University of Pennsylvania.

Five books on climate change you need to read