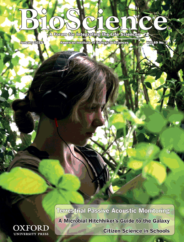 Since 1964, BioScience has presented readers with timely and authoritative overviews of current research in biology, accompanied by essays and discussion sections on education, public policy, history, and the conceptual underpinnings of the biological sciences.

Since the dawn of advanced civilizations, humanity has sought to manage the flow of rivers. Protection from floods, water for drinking and irrigating crops, and extraction of resources like food and energy are among the most popular reasons for building dams. Early successes in controlling the flow of rivers for society’s benefit led to more construction, reaching the point that in Europe and North America today most prime locations for placing dams have been taken. Additionally, many large river systems in the developed world have at least one but often multiple dams on them. Estimates suggest that water in reservoirs has increased the world’s lake environments by nearly ten percent. In parts of the developing world, new dam construction is now booming as well, as emerging economies try to make up for lost time.

As the dam construction boom continued in Europe and North America, policymakers seldom considered the full ecological costs. This was in part because the environmental costs of harnessing rivers were poorly understood. We now know that a myriad of physical, biological, and water quality impacts are associated with placing a dam on a river. Dams alter riparian and downstream habitats, replace sections of river with impounded lakes, and disrupt the flows of sediment, organic materials, and the migration of aquatic organisms like fish. Altering natural flow regimes also disrupts complex interactions among geomorphic, fluvial, and biological processes that are critical to ecosystem function.

Now that the ecological costs of dam construction are better understood, research has led some policymakers to implement new technologies to minimize impacts, such as better situating dams on the landscape, changing flow regimes to accommodate downstream organisms, and creating fish passage structures that allow fish to swim upstream and downstream.

In addition to mitigating impacts of current and future dams, society is also dealing with some existing dams by removing them. This is particularly the case for old, hazardous dams or those no longer serving their original purpose. In the United States, more than 1,400 dams have been removed from rivers; likewise, there are many completed or planned dam removal projects in Europe. Over the past three decades, researchers have been studying the outcomes of about 9% of these removals, which leads us to better understand the question posed above: “When a river is dammed, is it damned forever?” In other words, can natural functions of river ecosystems be restored after dams are removed? If so, how long does it take? And can these ecological outcomes be predicted before dams are removed?

Research suggests that river ecosystems—when given the opportunity—can recover after dams come down. Importantly, the trajectory of ecological recovery can be predicted. Although ecological responses to each dam removal are different because of unique local and regional conditions, including the dam’s size, location in the river network, and the river’s history and surrounding land uses (such as agricultural and urban development), the physical and biological processes that govern how ecosystems respond to dam removal are similar. Recent empirical studies and established theories about how rivers work provides a framework for identifying these shared physical and biological processes, and in so doing, creates a template for predicting how the ecology of a river responds to dam removal.

In a recent BioScience article, we constructed conceptual models that elucidate these shared physical and biological processes. These models can help resource managers, river restoration practitioners and other stakeholders identify the major factors likely to control ecological responses to future dam removals. By identifying the most important factors involved with ecosystem response, this approach should also help scientists predict ecological outcomes and identify which variables should be monitored. In turn, the knowledge gained from such monitoring can be used to further refine our conceptual understanding, and our ability to predict outcomes of future projects.

Conceptual models and a growing number of empirical studies suggest that rivers can indeed substantially restore functions lost from having been dammed. But the structure and function of the ecosystem may not be the same or even similar to what existed before dam emplacement. For instance, damming rivers causes changes in ecological communities, as native species adapted to flowing waters are replaced by nonnative species that thrive in reservoirs. Therefore, the ecological communities that assemble following dam removal may be different than those that existed before the dam was constructed. Managers and practitioners can use conceptual models to help stakeholders and community members understand the management context and potential range of ecological responses to dam removal and therefore the most likely future conditions, thereby informing expectations for ecological recovery.

Ryan Bellmore is a research fish biologist for the U.S. Forest Service in Juneau, Alaska, studying the complex mechanisms that support the resilience and productivity of freshwater ecosystems.

George Pess is a research fisheries biologist and manager of the watershed program NOAA’s Northwest Fisheries Science Center in Seattle, Washington. The watershed program conducts research on freshwater and estuarine ecosystems to assist with the management and recovery of anadromous fishes.