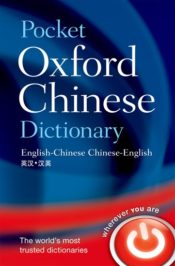 This year, the Chinese New Year begins today, February 5th, and people all around the world will be ringing in the year of the Pig.  Oxford Chinese Dictionary editor Julie Kleeman shares some insight into the traditions associated with the Chinese New Year celebrations.

Chinese New Year, or the Spring Festival (春节 chunjie) is a fifteen-day celebration beginning on the second new moon after the winter solstice and ending on the full moon fifteen days later.

Sounds complicated? That’s because when marking traditional holidays the Chinese still use a lunisolar calendar, a system that incorporates elements of the lunar calendar with those of the solar calendar.

The Oxford Chinese Dictionary boasts a centre section that contains, among a host of useful lists including those containing Chinese measure words, kinship terms, ethnic groups, SMS abbreviations and a chronology of Chinese historical and cultural events, a page dedicated to Chinese festivals and holidays, featuring brief descriptions of each event and its corresponding date in the lunar calendar.

The list kicks off with 正月初 – the first of the first lunar month, i.e. the New Year, or 春节 chunjie. If the information provided here whets your appetite for more, you can always look up the term itself, and just below the entry for 春节 chunjie you’ll find a handy culture panel on this, the most important of Chinese festivals.

According to the boxed note, 春节 chunjie is a time for families to reunite for a celebratory meal. The main New Year celebrations take place on New Year’s Eve or  除夕 chuxi. This is the biggest of all New Year’s spreads and the dinner is likely to include a veritable feast of delicacies. Chief among them is fish, because 鱼 or yu (the Chinese word for ‘fish’) sounds a lot like 余 or yu (the Chinese word for ‘abundance’).

In northern China no New Year’s Eve is complete without 饺子 (jiaozi), the dumplings, boiled in water, for which northern cuisine is famous. The Oxford Chinese Dictionary contains a culture box dedicated to the popular snack, explaining how it is made and why it is such a staple of the New Year’s feast.

One of the most popular greetings at this time of year is 恭喜发财 gongxi facai or ‘may you be prosperous!’ Look up 恭喜 gongxi in the dictionary and you will find 恭喜发财 gongxi facai listed as an example. You will also find a cross-reference to a usage box on popular Chinese greetings or 问候 wenhou that contains other ways of wishing a happy New Year to your Chinese friends.

Having the dictionary to hand during the Chinese Spring Festival might also help you to decipher 春联 chunlian or ‘Spring Festival couplets’, the black Chinese characters on bright red paper that are pasted up and hung on doorways and storefronts in the run-up to the Chinese New Year.

There are a huge variety of Spring Festival couplets to suit the scenario. Stores generally use couplets that make references to their line of trade, summoning in good fortune in businesses, or a good reputation. At family homes, couplets usually contain messages that invite good luck and happiness for the coming year.

Each couplet is made up of two lines of verse called the “head” and “tail”, which correspond with one other phonologically and syntactically word-for-word and phrase-for-phrase. The “head” is posted on the right side of the front door and the “tail” on the left.

The condensed language form can be difficult to understand, but once cracked promise profound and often clever, double meaning.

Note that word-for-word, the upper and lower lines are antithetical, and yet the meanings are complementary and the message content is hopeful and uplifting.

If you are looking for a little Spring cheer, the Oxford Chinese Dictionary can help you to decipher even the most complex of Spring Festival couplets. It will also provide you with all the most useful background information, both lexical and cultural, that you could hope for at this time of year.

Dig in and explore to reveal Spring Festival secrets!

A very happy new year to one and all. 新年快乐!

Julie Kleeman is Editor of the Oxford Chinese Dictionary.

Three millennia of writings – a brief history of Chinese literature