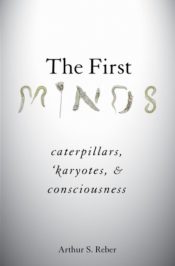 Arthur S. Reber’s new book argues that consciousness was present in the first living cells, and that even the simplest of organisms, the prokaryotes like bacteria, are sentient. In this piece, he imagines what it would be like to sit down with two bacteria and hear their opinions on consciousness, and how their sentience helps them keep alive despite the best efforts of humans.

Arthur Reber: I’ve got what I need here: a microscope, two Petri dishes, and the Universal Translator that the curators of the James T. Kirk Star Trek Museum loaned me for the day. Fabulous piece of digital mastery this thing is. So let’s get started.

Let me begin with you Lactobacillus salivarius, one of the most beneficial of bacteria. I’m finding that folks are having trouble accepting that single-celled species like you have a legitimate consciousness. How does this make you feel?

Lactobacillus salivarius: In a word, annoyed. We’ve been around for several billions of years waiting for someone to figure this out. Thanks for giving us the chance to speak out today.

AR: You’re quite welcome. You know the project started with a mostly one-way chat I had with a caterpillar some years ago. I’d have gotten to you sooner if I’d known I could get my hands on the Universal Translator. But, no matter. Let me turn to your friend, Mycobacterium tuberculosis. Uh, M. tuberculosis, you won’t mind if I sit back a bit.

Mycobacterium tuberculosis: Not a problem. I understand. You know that we don’t have evil intentions. We do what we do because of simple Darwinian mechanisms and that includes protecting ourselves from onslaughts of antibiotics.

AR: I know but still …. Let me get to heart of the issue of prokaryote sentience. Do both of you have feelings? Do you have internal subjective experiences? Or, as philosopher Thomas Nagel put it, is there something it is like to be a bacterium?

MT: Of course we do and of course there is. Look, there are molecules in this dish, some are tasty and nutritious, some decidedly not. Some are supportive of life. Others, not so much. How could I absorb the good ones and avoid the toxic ones if I didn’t have a good feeling when encountering say lactose but feel pain when I run into a concentrated salt solution?

LS: Moreover, we have clusters of receptors on our membranes. We can detect up to fifty different kinds of stimuli, temperature, nutrient gradients. We sense light using rhodopsin, the same molecule you use.

AR: That is very impressive. Tell me more. I understand you also learn and can form memories. How can you do these remarkable things when you’re just a single celled critter?

LS: Well, first I’m not fond of being called a “critter” but I’ll let it pass. Of course we learn and, more obviously, what’s the point of being able to learn if you can’t set up memories?

MT: Last week someone in your lab tried to fool me. First she flooded my dish with some sugar that I really liked — later I discovered it was lactose. Then she followed that with another sugar which turned out to be maltose. It was okay, but not as tasty as that first batch. But that’s okay because I know how to handle these different sugars. I simply modify my biomolecular functions to accommodate whatever sugar is around.

MT: Shift metabolic functions. Goodness, you just don’t appreciate the things we can do. But, back to the sugars. Then things got really interesting. Suddenly my little home was flooded with the first sugar again. So I shifted my metabolism to make it easier to absorb. Then, bingo, back to the other one. It didn’t take long to realize what she was up to. So I did the obvious. As soon as the lactose stopped I began anticipating the maltose so I’d be ready to maximize absorption. And ditto with the maltose. So everything was cool, right? I’d learned a simple pattern and was doing just fine. You know what your stinker of a lab-mate did then? She bloody tricked me. After a dose of maltose she gave me another one. Caught me totally off-guard. Here I was, metabolically prepared for a really tasty sugar and I got smacked with a second rate dessert that I was so not ready to consume.

AR: Well, I guess I’m sorry for any distress she caused you but she was just trying to see if you could learn a simple pattern. But how about that memory thing. What kinds of memories do you and your unicellular friends have? Salivarius, can you tell us?

LS: Sure, but it really should be obvious. I hang around in people’s insides where the temperature often changes. I happen to like some temperatures better than others. As I swim from one area to another I sense temperature gradients looking for the most comfortable. Then I either stay where I am, go forward, or retreat. How could I make the right choice if I didn’t have a memory of the temperature of the medium that I was in before?

AR: Huh. Makes sense. But that, if you don’t mind my saying so, isn’t all that impressive. You’re only talking about a second or two. I’m not even sure everyone would agree with you calling this a “memory.”

MT: Look, Arthur, let’s not make this little chat nasty. I could send some of the folks from my family your way.

MT: Let me tell you what a friend of ours does and see if you don’t think this is an instance of an ontologically secure biomolecular representation — you can look that up if that phrase is too sophisticated for you.

AR: Ok, I already said I was out of line so you can stop with the snarky remarks. Just tell me about memories in prokaryotes.

MT: There’s a species of sessile prokaryotes – “sessile”, if you don’t know, means stationary –Caulobacter crescentus, that can hold onto a memory for up to two hours.

MT: A group of C. crescentus was clinging to a piece of lab detritus that one of your colleagues left in their dish when suddenly a wave of concentrated salt solution hit them. Frankly, we’re pretty sure it was done by your friend with the flip-flopping sugars. But they did what we all do in these situations, shift metabolism to be able to mitigate the situation — uh, you’re okay if I use big words like “mitigate”?

AR: You can stop insulting me anytime you want. Get on with the story.

MT: My, my, we are the sensitive one aren’t we? Anyway, your sadistic cell biologist friend did this several times. It became clear that my sessile friends were going to have to play “scout” — you know, like in “be prepared” — and hold on to the memory of nasty salt solutions and maintain the appropriate metabolic condition. They got so good at it that the metabolic memory could last for up to two hours. And, here’s the interesting part. When C. crescentus divides the “mother” cells stay and the “daughter” cells swim away looking for their own perch (yeah, I know, gender-linked terms aren’t PC but that’s the way it is).

At this point your nasty friend did it again. Another wave of salty water. The mother cells, because they held onto to the metabolic memory, had a pretty high survival rate while the poor daughter cells, having swum to a presumably safe place, succumbed in large numbers. They had no need to recall events from the past — or thought they didn’t need to. You see why we’re suspicious of your kind.

AR: That’s pretty impressive. But I won’t apologize for my species. Anything else?

LS: Sure, I spent several hours the other day being forced over a tiny bridge between two Petri dishes. I say “forced” because she (and you know who “she” is) kept putting all the good food in whichever dish I wasn’t in. And worse, she put drops of an acid that really hurt to touch. It didn’t take me long to realize that there was a pattern to the acid drops and I was soon able to navigate the bridge without touching anything icky. That, I was thinking, will show her. Needless to say she then moved the acid spots and I had to learn a whole new pathway. I did this faster than the first time — and I hope you can see why.

AR: Well you guys are telling quite a story. Maybe folks will have a bit more respect for you, my tiny friends. One thing is clear, you’re both great conversationalists.

LS: But we communicate all the time among ourselves.

LS: Yeah, seriously. We have to. We like to form colonies, hang around together. If a collective gets big funny stuff happens. Those of us in the center find that the nutrients, which are mainly on the periphery, aren’t getting to us. So we send out a molecular signal that travels through the collective asking our friends out there to slow down, reduce metabolism, stop dividing so much. They always do. We’re a very altruistic bunch. So the tasty bits come down our way. We absorb them and we send out another message basically saying “ok, we’re fine now.” And things go back to normal.

AR: So what you’re telling me is that when life began minds came along for the ride. The bottom line is that life and sentience are, and I hope you won’t mind my using a big word, co-terminous. Just as all life, no matter how complex, evolved from prokaryotes, all minds, all forms of consciousness, no matter how complex did as well. A nice theory. I like it.
Now I’ve got to get the Universal Translator back. The battery light is blinking so the interview will have to end. Thanks to you both.

LS and MT: And thanks to you and the folks at the museum for letting us tell our tale.

Arthur S. Reber is Broeklundian Professor, Emeritus (Brooklyn College and the Graduate Center of the City University of New York) and Visiting Professor of Psychology at the University of British Columbia in Vancouver, BC. He's published widely in cognitive psychology, philosophical psychology, lexicography, and recently published his first novel. He's best known for discovering "implicit learning" and developing a model of the cognitive unconscious based on principle of evolutionary biology. In his new book, The First Minds: Caterpillars, 'Karyotes, and Consciousness, he argues that consciousness was present in the first living cells, that even the simplest of organisms, the prokaryotes like bacteria, are sentient.