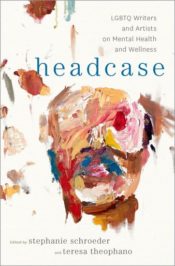 People with power using terms to belittle those with less power is something familiar to marginalized communities. While some shy away from terms used in this way, others grab them back, telling the world words can’t cow them.

At this point in history, it’s more vital than ever to name ourselves and to reclaim terms that have been used against us as queer-identified people living with mental health conditions. If we do not name ourselves, the door is wide open for others to label us.

Naming is powerful and historically, the power to name has been held by outsiders who designate and marginalize those less powerful as “other.” For example, gay men and lesbians have been called “fags” and “dykes,” and those with mental health issues have been called “crazy,” a word associated with dangerous or violent behavior. Because of this and the current nefarious activities by nationalist governments in many places around the globe, it is crucial to tell our own stories and to create a record of LGBTQ narratives to ensure our own futures.

It is imperative that we explore the evolution of queer identity with regard to mental health, detail experiences that foster resilience and stress-related growth among people, and examine what comes after marginalized sexual orientation and gender identity status is disentangled from their historical association with the concept of mental illness. This is how we can ensure appropriate treatment for our communities.

The Stonewall Rebellion is a touchstone for the modern-day LGBTQ rights movement, though, of course, LGBTQ people have existed throughout history and rebelled in our own ways.

Reclamation in LGBTQ communities has come in many forms. Terminology such as “queer,” “dyke,” “fag,” and even “tranny” has been embraced by different segments of our communities, while some under the LGBTQ umbrella have categorically rejected these words. The pink and black triangles used by the Nazis to identify and shame male homosexuals and “asocials” (including lesbians) in the concentration camps have become queer and feminist symbols of solidarity and strength. The Stonewall Rebellion is a touchstone for the modern-day LGBTQ rights movement, though, of course, LGBTQ people have existed throughout history and rebelled in our own ways. There is no unanimity about reclaiming these, or other, terms. Although the majority often treats us as though we are monolithic, marginalized communities are genuinely diverse; we each have different opinions and experiences. We need to find strength and identity in our own ways and on our own terms.

These days, LGBTQ folks are “queering” traditions and institutions such as marriage, the family, workplaces, monetary systems, literature, art, and much more, including how we discuss and view people living with mental health issues. But claiming “madness” or calling oneself “crazy,” “mad,” “nuts,” or even a “headcase” is still all-too-often frowned upon. To reiterate, a shared characteristic does not necessarily foster agreement among all community members. For some, to snatch back these words as soon as possible extinguishes their negative power; for others, the pain of experiencing a slur is still too raw. Shame and stigma are freighted by well-known studies about the prevalence of mental illness in our communities. Who wants to be a statistic, after all?

By questioning – and then subverting – categories of gender and sexuality, hetero- and cis normativity, and invalid notions about mental health and wellness in our communities, we can (re)create LGBTQ narratives that make sense to and support us and our communities both creatively and honestly. Naming ourselves, with reclaimed terms or new ones, rebuffs shaming and allows us to embrace our entire beings. It can bring our whole selves to life outside of any closet someone might wish for us.

What are your names?

Stephanie Schroeder, JD, is a freelance writer based in New York City. Her work has been anthologized in: That's Revolting!: Queer Strategies for Resisting Assimilation (Soft Skull Press, 2008); Here Come the Brides!: Reflections on Lesbian Love and Marriage (Seal Press, 2012); and Easy to Love but Hard to Live With: Real People, Invisible Disabilities, True Stories (DRT Press, 2014). Schroeder is a part-time peer advocate and the author of the memoir Beautiful Wreck: Sex, Lies & Suicide (Creative Evolution, 2012).

Teresa Theophano, LMSW, is a freelance writer/editor and full-time social worker working with LGBTQ older adults in New York City. The volume editor of Queer Quotes (Beacon Press, 2004) and contributor to numerous anthologies and websites including xoJane.com and glbtq.com, Theophano has been involved in mental health advocacy and LGBTQ movement building for years. She is the co-founder of the NYC Queer Mental Health Initiative (QMHI), a peer-based support network based in Brooklyn, and is at work on a co-written volume about queer suicide prevention and postvention.

They are the editors of Headcase: LGBTQ Writers & Artists on Mental Health and Wellness, published by Oxford University Press.

The effects of junk science on LGBTQ mental health

Taking pride in standing up for the transgender community