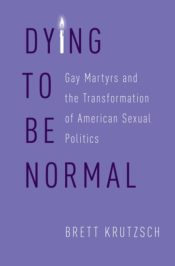 Dying to Be Normal: Gay Martyrs and the Transformation of American Sexual Politics

On 26 October 2018, twenty years after two men in Wyoming brutally murdered gay college student Matthew Shepard, the Washington National Cathedral hosted a service to inter Shepard’s ashes in a permanent memorial. More than four thousand people attended the service that was co-led by the Reverend Gene Robinson, the first openly-gay elected bishop of the Episcopal Church. Robinson announced to the assembled crowd that Shepard had “come back to church.” During the service, Shepard’s father declared, “Matt loved the church.” Here, as in 1998 when Shepard died, Shepard’s veneration was connected to religion, to the image of him as gay and Christian.

When Shepard died in 1998 numerous conservative religious and political leaders portrayed gays as godless sinners. Throughout the 1980s and 1990s, during the worst of the American AIDS epidemic, popular pastors like Billy Graham and Jerry Falwell described AIDS as God’s punishment for the sin of homosexuality. AIDS activists insisted that most heterosexuals did not care that gay and bisexual men were dying by the thousands because many saw homosexuality as sinful. And yet when news circulated about Matthew Shepard’s murder in 1998, thousands of heterosexuals publicly expressed their outrage over his death. Although he was one of numerous anti-gay murders in the 1990s, and even though he had been unknown to the public before he died, heterosexual politicians, celebrities, and average citizens rallied to memorialize him. President Bill Clinton issued a statement about Shepard from the White House. Members of Congress joined five thousand Americans on the steps of the U.S. Capitol to honor him. More than sixty additional memorial services, marches, and vigils took place throughout the country. Never before had an anti-gay murder mattered so greatly to the nation.

Several factors help explain why Americans cared so deeply about Shepard’s death. Shepard was white, middle-class, and gender conforming. He resembled the few images of gay men and lesbians in popular culture in 1998, like Ellen DeGeneres, who had come out as gay one year earlier, and the characters on Will & Grace, which premiered a few weeks before Shepard died. Shepard was also young. He was twenty-one but wore orthodontic braces and stood five feet two inches tall. His youthful image made him seem like a non-sexual gay adolescent rather than the stereotype of hypersexual gay men.

Shepard’s widespread acceptance was also connected to religion. Shepard was a practicing Protestant who had been baptized and had served as an acolyte. The public learned that Shepard had joined only two clubs when he started college: one for LGBT students and another for Episcopalians. At the time of his murder, well-funded conservative Christian groups actively promoted ex-gay ministries where pastors insisted homosexuality could be eradicated through proper Christian devotion, an idea explored in the 2018 film Boy Erased. In 1998, Shepard countered the idea that Christianity and homosexuality were incompatible and epitomized how one could be both gay and Christian. To many heterosexual Christians, Shepard, as a white practicing Protestant, became a safe, relatable gay citizen.

Not everyone, though, accepted Shepard as a legitimate Christian. Outside his funeral, the Revered Fred Phelps and congregants from his Westboro Baptist Church screamed that Shepard was in Hell. Phelps and the Westboro Baptist Church had previously picketed the funerals of several gay men who had died from AIDS complications. But their notoriety was directly connected to Shepard’s popularity. As they shouted anti-gay epithets, a group of Shepard supporters linked arms and formed a line in front of them. Then they sang “Amazing Grace” loud enough to drown out the anti-gay screaming. The standoff became a media flashpoint as a visible line emerged between those who supported gays and those who persecuted them. For many Americans, the Westboro Baptist Church’s protest against the young, and Christian, Matthew Shepard seemed like an abhorrent display of hate, a history of religious homophobia gone too far.

With Shepard’s ashes interred at the Washington National Cathedral, we might ask what his enshrined memorial should mean for us twenty years after his death. For one, his placement in the Cathedral should remind us that LGBTQ+ politics and religion are not always in opposition, and that many progressive religious leaders have fought for LGBTQ+ equality for decades. Second, his memorial should draw our attention to those who are most frequently targeted for violence in the present day, such as transgender women and queer people of color. Two decades after his death, we should be doing everything we can to make sure the LGBTQ+ Americans who, unlike Shepard, are not white, gender conforming, or Christian, matter as equally to the nation as those who do. That should be Shepard’s legacy.

Brett Krutzsch is Visiting Assistant Professor of Religion at Haverford College. His scholarship examines intersections of religion, sexuality, gender, race, and politics in the United States.