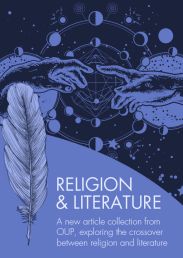 There is a long history of people exploring the relationship between religion and literature. We might go back to sacred texts from different traditions and think, for instance, about why there is such a vast array of literary forms in the Judaeo-Christian Bible. Or we might consider the role that religion plays in the literary tradition, from the clear Christian content of texts such as The Divine Comedy and Paradise Lost, to the extensive engagement with theological motifs, symbols, and ideas that is such a striking feature of so many modern texts.

While there are many ways of telling a story about how religion and literature relate to one another, it is worth pondering why our thinking about this relationship continues to gather pace. The latter part of the 20th century saw the emergence of three major journals focused on this area—Religion and Literature, Christianity and Literature, and Literature and Theology—and interest has intensified further in the early years of the 21st century with the so-called “religious turn” in the humanities. If our modern western age is increasingly secular, as many would have us think, then why the ongoing interest?

One way of answering this question comes from the work of Charles Taylor, whose book A Secular Age (2007) has proved so pivotal for many scholars working in the humanities. Taylor argues that our secular age is not one in which religion has gone away but is, rather, an era characterised by the new position in which religion now finds itself. Whereas pre-modern western thought saw Christianity ensconced as the dominant ideology, our modern age is one in which religious belief is one option among many.

Taylor’s epic story of religion and secularity has come in for plenty of criticism, as one might expect of a work that tries to cover so much historical ground. But his basic premise about the pluralised context for belief in the modern age offers a valuable means of understanding the snowballing interest in the study of religion and literature. Literature has long been the most promiscuous of forms, covering any area of thought and experience with which a writer happens to be concerned. Since the emergence of literary studies in the late-19th century, critics have struggled to identify the precise content of the discipline, and they have frequently brought neighbouring fields of knowledge—history, psychology, philosophy, science, art, religion, and so on—into their reflections on literary form and language. The promiscuity of literature, and the literary criticism that accompanies it, might be said to epitomise our modern secular age. And it is in this setting that religious belief continues to play a major role, as it is routinely put into conversation with other ways of thinking.

We can see how Christianity sits alongside and butts up against other systems of belief in the novels of Charles Dickens. Critics have long debated whether Dickens should be thought of as a religious writer, and one can see why this question has proved hard to resolve. Dickens can be highly critical about parts of the church, and it is certainly not the case that his novels are written with pious ends in mind. But it is hard to think of another Victorian writer who quotes from the Bible and the Christian tradition more extensively. Many of the most poignant moments in his novels, from the death of Jo in Bleak House as he is led in a recital of the Lord’s Prayer, to the climactic role given to ideas of atonement and resurrection in A Tale of Two Cities, are indebted to Christian thought. The sacred and secular are regularly commingled in Dickens’s fiction. What we find in his work, as in so much modern western literature, is the myriad of ways in which the Christian faith jostles with other systems of belief. Untangling these different threads can be difficult, and it would be a mistake to think that the sacred and secular can ever finally be separated. But their intersection and crossover in modern western literature is worth closer examination. Those who want to explore the relationship further, whether with reference to Christianity or other religious traditions, might usefully start with the three journals mentioned already as well as two recent edited collections: The Cambridge Companion to Literature and Religion (2016) and The Routledge Companion to Literature and Religion (2016).