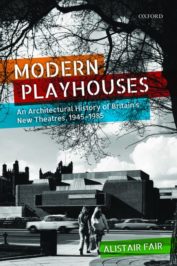 The official opening on 14 June 2018 by the Queen and Duchess of Sussex of Chester’s new cultural ‘hub’, Storyhouse, offers a timely moment to consider the theatre as a building type. Storyhouse is an interesting re-thinking of what an Arts building can be. It combines a theatre, cinema, library, and café, in an attempt to break down boundaries between artistic and institutional structures. These facilities are housed within a 1930s former Odeon cinema, which has been significantly reworked and extended. The distinctions between the building’s functions are deliberately blurred. Library books, for example, are found throughout the foyer spaces, which feel anything but ‘institutional’.

Storyhouse’s intentions are explicitly democratic. It aims to appeal to a broad public. In this respect, it can be seen as the latest example in a long-running history, dating back to the 1940s. In the middle of that decade, public subsidy was directed to the performing arts for the first time. The Arts Council of Great Britain was founded in 1946. In the case of theatre, its interest was largely the country’s ‘repertory’ theatres, which presented a mixed programme of what seemed to those holding the purse-strings to be culturally worthwhile productions. Local government was then given the power routinely to subsidize the performing arts in 1948. Its support could be directed not only to individuals and organizations, but also to the construction and maintenance of buildings. The result was something new in Britain: the civic theatre.

During the 1950s and 1960s, the amount of public money spent on theatre (and theatre architecture) in Britain gradually increased. The election of a Labour government under Harold Wilson in 1964 led to a significant rise in spending, with Britain gaining its first Minister for the Arts, Jennie Lee. For Lee, it was critical that as many people as possible should have access to what she considered ‘the best’ of the arts. Her aim was essentially an education in taste and, by extension, a transformation in peoples’ outlook. While subsidy was usually only a small part of a theatre’s income, the Arts, in effect, were cast as the cultural element of an ever-evolving Welfare State.

In some ways, Lee’s view of excellence was a relatively narrow one, and it might now be questioned. However, it catalysed a spate of theatre-building which lasted until the early 1980s. The new British theatres of this period reflected a range of agendas and ideas. An important debate related to the nature of performance space, and the optimum relationship between actor and audience. How could the three-dimensional, ‘live’ qualities of theatre be emphasized in order to distinguish it from cinema and television? How could new approaches to set design be best accommodated on stage? What sort of auditorium was the most ‘democratic’, with good sightlines and acoustics for all?

At the same time, the involvement of central and local government in supporting the Arts means that the theatre architecture of this period can also be understood in terms of various broader debates. For example, the potential was often mentioned for theatres to embody and enhance civic pride within towns and cities whose centres were frequently being modernized. To some extent, these buildings took a role previously performed by town halls and railway stations, connoting modernity and status. Theatres were often conceived in ‘urban’ terms: how would they animate town and city centres? Should they be located among civic buildings, where their prestige might be easily understood? Or were less overtly civic locations, perhaps in shopping centres, more appropriate? Another strand of debate related to the idea of the building itself. How could the forms and materials of modern architecture be used to suggest a new image of theatre, one which reflected the intention that it be available to everyone and which avoided elitist monumentality?

In answering these questions, a diverse range of buildings was created, in locations from Plymouth to Inverness, Aberystwyth to Ipswich. Visionary theatre directors worked with committed politicians, talented architects, and expert technicians to consider what a modern theatre could be. Many striking buildings were constructed. One task of the historian is to explain the forms these buildings took. However, just as important are the ideas, processes, and collaborations which made these buildings possible, and the publications, exhibitions, and professional organisations which shaped the debates.

Of course, there have been important developments since the 1980s, not least in terms of community participation and the extent to which theatre genuinely reflects the population it serves. In addition, theatre now takes place in a growing range of spaces. The National Theatre of Scotland, indeed, has eschewed architecture entirely: its travelling operation contrasts with the concrete solidity of the National Theatre in London, opened in 1976. Yet, as Storyhouse reveals, buildings for performance remain important and revealing. Just as Storyhouse allows us productively to question the role and place of theatre in the 21st century city, so Britain’s post-war theatres allow us to tell new stories about the country’s social, urban, and political histories during an optimistic period in which anything seemed possible.