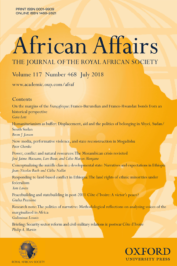 “Can we go a little lower? Could we find someone that will do it for board and room, you know, that has such a terrible country, that maybe they’ll just go out of the country and be a free security guard?” So the co-chairman of the Commission of Wartime Contracting in Iraq and Afghanistan rhetorically asked during a hearing on private security contractors in Washington on June 21, 2010. One year previously, a British private security company providing services for the US government reached an agreement with the Sierra Leonean government to employ up to 10,000 Sierra Leonean ex-servicemen for security contracting in Iraq. In a competition for ‘the lowest price technically accepted’ (LPTA), it was decided that the Sierra Leonean contractors should replace the Ugandan guards against a monthly pay of 250 USD for providing static security in Camp Shield – an American military base in Baghdad.

In the context of the gradual withdrawal of the standing armies, the deployment of private security contractors is part of the Pentagon’s strategy to replace ‘boots on the ground’. In order to reduce labour costs and maximise profit, the companies have turned to recruitment sites such as Peru, Colombia and Uganda – countries, and in particular former colonies and post-war settings from where so-called ‘third country nationals’ (TCNs) can easily be recruited. Hosting a large population of military-trained, unemployed youth waiting for opportunities to emerge, Sierra Leone constitutes a fertile ground for recruitment.

When the recruitment was announced in Sierra Leone, it was referred to as the ‘Overseas Youth Employment Programme’. Among ex-soldiers and ex-militias this programme was considered a chance to finally contest their self-ascribed position as ‘victims of peace’. When peace was declared in 2002 after a decade of devastating civil war in Sierra Leone, they became positioned as violent perpetrators who constituted a threat to national security. While the transition from war to peace was supposed to mark a positive process of reintegration and reconciliation, it became instead a process marked by experiences of being stuck and a struggle to carve out space for survival and recognition. Against this background, deployment in Iraq was envisioned as a junction for a better life.

As the first batch of contractors left for deployment in Iraq, they had no idea for how long they would be deployed, under what conditions they would work, or what salary they might receive. This uncertainty was coupled with anxiety about venturing into a new warzone. Having been disarmed for almost a decade, they once again had to carry weapons, and this time in an environment in which their combat skills from West African warfare could not be directly transferred. But evaluating the balance between risk and profit, the Sierra Leonean contractors were optimistic that their work would pay off.

“We are slaves”. Soon after arriving at Camp Shield, this was how the Sierra Leonean contractors came to describe the exploitative conditions that characterised their deployment. In Iraq, they found themselves positioned at the bottom of a racial hierarchy of security workers in which they were reduced to bodies rather than recognised labourers. When the Sierra Leonean contractors were being mocked by the Indian workers cleaning their toilets due to the low salary level, they eventually went on strike. But their protest did not inspire any improvements. In May 2010, 150 contract recruits were instead deported back to Sierra Leone without pay.

Contemporary warfare increasingly depends on precarious labour. Today, private security contractors outnumber regular troops in both Iraq and Afghanistan. Yet, the presence of the growing workforce of TCNs from the global South receives little attention in public and scholarly debates. Operating largely outside the reach of international conventions, and in a context where their legal status tends to be suspended, the status of these contractors falls into a shadowy area. They receive no medals or pensions, and their deaths are considered insignificant to a national audience. They constitute the hidden underbelly of global security.

Private security companies profit from an invisible army of precarious labourers. But for contractors from the poorest countries around the globe, the supply of security comes with a price. The Sierra Leonean contractors have endured long duty hours without proper pay. They have fallen ill due to lack of proper medical supplies. They have left their families behind. And they have returned home with little to show for their labour. Rather than leaving their position as victims of peace behind, they have been further victimized by uneven distributions in the economy of global warfare.

The long-term effects of these uneven distributions for security contractors are yet to be seen. While attention is currently being devoted to the impact of private contractors on military effectiveness and local populations in host countries, we know little of the post-deployment trajectories of contractors upon their return to their home countries. For the Sierra Leonean contractors, homecoming was characterized by experiences of degradation and traumatic memories. In a comprehensive RAND study of the health and well-being of private security contractors operating in Iraq and Afghanistan between 2011 and 2013 it was found that 25 percent screened positive for post-traumatic stress disorder (PTSD) – a significantly higher rate than military personnel. This is just one out of several costs of facilitating the supply of security for the lowest price possible.

Maya Mynster Christensen is a postdoc researcher at the Danish Institute Against Torture. She is specialized in political anthropology, and has expertise in the fields of militia mobilization, private security contracting, military interventions and urban policing. In September 2018 she was awarded the Stephen Ellis price by African Affairs for the article ‘The Underbelly of Global Security: Sierra Leonean Ex-Militias in Iraq’.

The worrying future of trade in Africa

How African presidents rig elections to stay in office