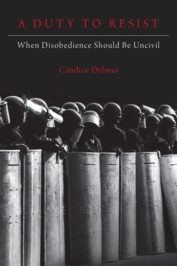 A Duty to Resist: When Disobedience Should Be Uncivil

Oksana Shachko died on 23 July 2018. She co-founded the feminist socialist collective Femen in her native Ukraine ten years ago, to fight against patriarchy’s three central forms—dictatorship, the sexual exploitation of women, and established religion. One of Femen’s first protests was a guerrilla theater performance protesting sexual harassment at the university. Soon thereafter, Femen discovered its distinct “weapon”: bare breasts. Femen “hijacked” the Euro Cup of men’s football in Kyiv to protest against sex tourism, they “kidnapped” a baby Jesus from a nativity scene in the Vatican, and “ambushed” Russian President Putin at the Hanover trade fair in 2013. They did all this topless, with slogans painted on their young bodies, magnetizing the spotlight.

By “weaponizing” their naked breasts, Femen activists reclaimed female nudity and asserted the right to control their bodies. Femen dubs its tactics, which include “sex attacks, sex diversions and sex sabotage,” sextremism, or “female sexuality rebelling against patriarchy.” Their nudity symbolizes freedom and autonomy. It puts patriarchy into a frenzy.

Femen members have suffered threats and physical abuse. They have been charged with indecent exposure, blasphemy, and sabotage. After staging a protest outside the KGB in Belarus in 2011, Femen activists, including Ms. Shachko, were abducted by security agents, tortured, and abandoned three days later in the woods. In Paris, where Femen is now based, they were pepper-sprayed and beaten by Catholic and nationalist protesters when they disrupted a march against planned legislation to give same-sex couples the right to marry and adopt.

Journalists and sympathizers often describe Femen’s actions as “civil disobedience.” Doing so may help to make their protests intelligible or more palatable, situating them within a venerable historical tradition associated with the likes of Rosa Parks and Martin Luther King, Jr. Yet, the classification does these feminists a disservice, taming their radicalness into an ill-fitting straightjacket.

Civil disobedience is commonly conceived as a principled, public, nonviolent, non-evasive (in that the agent accepts legal sanctions), and respectful breach of law intended to reform a law or policy. Femen’s opponents contrast their actions with supposedly exemplary campaigns of civil disobedience, such as the “whites only” lunch counter sit-ins of the early 1960s in the United States. Femen’s sex attacks consist of principled, public, and nonviolent breaches of law. But critics have a point: Femen activists seek more than legal reform; they resist arrest tooth and nail; and they thumb their nose (or nipple, in this case) at patriarchal society’s “good” mores. They epitomize a kind of uncivil disobedience.

When Femen cut down a large cross with a chainsaw in central Kyiv, as part of a series of “Free Pussy Riot” actions (their Russian sisters in arms having been sentenced to two years in prison for their “Punk Prayer”), they were not trying to abide by the rules of the civil disobedience playbook. They burst into a male-dominated space, destroyed a religious (and phallic) symbol, defied patriarchal norms, and provoked men. The civil disobedience playbook demands that the oppressed demonstrate their dignity to those who don’t recognize it through dignified and respectful conduct. Think of Black civil rights activists impeccably dressed in their Sunday best, thoroughly trained in and committed to nonviolence, just sitting at a restaurant counter or riding a bus, managing not to react to being insulted, spat on, slapped, beaten, kicked, fire-hosed, or brutally arrested. They sought to persuade the White majority that they deserved equal rights.

Like the Black Lives Matter slogan “Not Your Grandfather’s Civil Rights Movement,” in reaction to this kind of politics of respectability, Femen’s could be: “Not Your Grandmother’s Women’s Lib Movement.” In fact, Femen’s members are more closely aligned with now-distant feminist forbearers, the suffragettes.

At the turn of the 20th century, the suffragettes embraced well-targeted property destruction and evaded law enforcement. They smashed the windows of London’s shopping district, cut telephone and telegraph wires, burnt post boxes all over the UK, vandalized and even bombed government offices and museums, and destroyed golf course tufts with acid. Emmeline Pankhurst defended suffragists’ use of “militant methods” and characterized herself as a “soldier” in a “civil war” waged against the state. The suffragettes were seen as lacking in self-respect, “unladylike” and “mad”; they were beaten, tortured, committed to mental hospitals against their will, imprisoned, and force-fed when they undertook hunger strikes.

Femen activists, who are routinely called “sluts” and “whores” and describe themselves as “hooligans,” pursue this radical tradition. They conceive of sextremism as a “highly aggressive form of provocation,” and don’t give a fig if the majority of the public sees their actions as undignified. They deliberately flout civility, and the liberal requirement to respect and listen to one’s opponent. Femen shout down their adversaries. Their bare chests proclaim “Fuck the Church,” “Fuck Your Morals,” or “In Gay We Trust!”

Whereas civil rights activists typically submitted to arrest, pleaded guilty in court, didn’t try to excuse or justify their lawbreaking, and accepted their punishment, thereby evincing their respect for the law, the suffragettes often evaded law enforcement and decried the state’s illegitimacy. Elizabeth Cady Stanton described “the insult of being tried by men—judges, jurors, lawyers, all men—for violating the laws and constitutions of men, made for the subjugation of my sex.” Femen members likewise sometimes resist arrest and denounce the system that tries and punishes them, insisting that it isn’t owed any deference.

Candice Delmas is an Assistant Professor of Philosophy and Political Science at Northeastern University. Her areas of specialization are moral, social, political, and legal philosophy. She is the author of A Duty to Resist: When Disobedience Should Be Uncivil (September 2018).

Some of the mysteries of good character