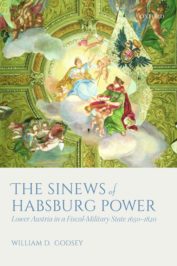 The Sinews of Habsburg Power: Lower Austria in a Fiscal-Military State 1650-1820

To mark the 65th anniversary of her coronation, Queen Elizabeth II has given a rare interview in which she talked about the event from the extraordinary perspective of the main participant. Her delightful remark that crowns “are quite important things” betrayed intimate familiarity with the meaning of the ceremonial trappings associated with an ancient tradition that in most places has now died out. Future scholars of twentieth-century monarchy and ritual have thus come by a unique piece of oral history. With the exception of the papal coronations of John XXIII and Paul VI, the pageant of 1953 was the only coronation in Europe in the second half of the twentieth century. The other monarchies still extant along Europe’s western edge have long ceased to crown their rulers. With the death of King Michael of Romania (1921–2017), like Elizabeth II a great-great-grandchild of Queen Victoria, the last king to have been anointed and crowned in continental Europe has disappeared. As recently as the nineteenth century, coronations were staged across Europe — from Moscow to Berlin to Paris.

It is only an ostensible irony that coronations underwent a revival during the revolutionary age. New dynasts including Napoleon, who was crowned twice — as French emperor and Italian king — sought the legitimacy that such ritual was thought to bestow. Perhaps the most remarkable concentration of inaugural rites under one government in modern European history transpired in the Habsburg monarchy (or “Austrian Empire” as it was known after 1804). Between the death in 1790 of the emperor Joseph II, an enlightened despot who famously rejected most inaugural rites, and the revolution of 1848, some two dozen coronations and other investitures occurred in Habsburg-ruled territories. In the great majority of these — from the inauguration of Leopold II (r. 1790–92) as Austrian archduke in 1790 in Vienna to the coronation of Ferdinand I (r. 1835–48) as king of Lombardy-Venetia in 1838 in Milan — the rulers themselves or their consorts personally took part. On a few occasions, including Tyrol in 1790 and Transylvania in 1837, non-reigning members of the dynasty or other representatives stood in.

Until 1848, a coronation or other inaugural rite survived in each of the four main groups of territories that made up the Austrian Empire. There was always an archducal investiture in Vienna (the Austrian lands), an act of homage and coronation in Prague (the Bohemian lands), and a coronation in either Pozsony (Pressburg, Bratislava) or Buda (Ofen) (the Hungarian lands). Later a coronation was instituted in Milan for the kingdom of Lombardy-Venetia. The (re-)acquisition of territories as a result of the Napoleonic wars involved the revival or invention of rites for which the rich ceremonial tradition of the Court of Vienna offered a veritable trove of knowledge and experience. The Habsburgs were furthermore pioneers in the use of inaugural ritual to modern purposes. The spectacular coronation of the second king of Lombardy-Venetia in Milan in 1838 not only betrayed the influence of ceremonial practice in the other Habsburg lands, but also the more recent experience of staging inaugural rites to rally popular-patriotic support in a new key, to expand the monarchy’s political base, and to legitimate new forms of constitutional order. The picture to the right shows the emperor Francis in the midst of local militia and common people immediately following his investiture in Innsbruck in 1816. Just a couple of months earlier he had issued a written charter for Tyrol in keeping with the provisions of the Congress of Vienna and appropriate, in his words, “to the conditions of the times.”

Unlike the British, the Habsburgs never succeeded in putting on a coronation that applied to all of their many realms. By 1953 the coronation in Westminster Abbey had become more than simply an English one. The Queen swore an oath to govern the peoples of her various kingdoms, dominions, and possessions “according to their respective laws and customs.” It was recognition that unity is best preserved through diversity. Still, the endurance into the nineteenth century of Habsburg inaugural rites reflected the successful practice of power in an expansive, composite polity in which no territory clearly dominated. To remain viable, such a state needed the support of its component parts and to that end it allowed for local rights, usages, languages, etc. The coronations and other inaugural rites betokened the political compromises that obtained between the central government in Vienna and local elites who controlled access to financial and other resources as well as shaped local opinion. In a paradox typical of Habsburg history these ceremonies, which by their nature were particularist, nonetheless manifested the comparatively high level of integration that the Habsburg Empire had achieved by that time. They existed only in the main lands and a few peripheral areas rather than in all historic territories. In emblematic ways ranging from the commemorative medals struck to the choice of participants, the individual rites themselves anchored the territorial-particular into the monarchical whole. On the coin issued for the Lower Austrian inauguration in Vienna in 1790 (shown at the top of this post), the Bohemian lion is seen grasping the Hungarian cross in one paw, the Austrian heraldic shield in the other.

William D. Godsey studied modern history at the University of Virginia. He is currently a Senior Research Associate of the Austrian Academy of Sciences, Vienna, and a Fellow of the Royal Historical Society. His most recent book is The Sinews of Habsburg Power: Lower Austria in a Fiscal-Military State 1650–1820 (Oxford University Press, 2018). It has been awarded the 2018 Arenberg European History Prize by the Arenberg Foundation.