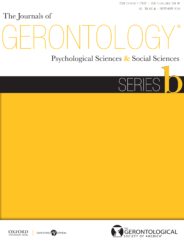 The Journals of Gerontology, Series B: Psychological Sciences and Social Sciences

When we think about stepfamilies, images of the perennially popular TV show The Brady Bunch likely spring to mind. Young single parents unite in marriage, bringing together their children from prior unions to form a stepfamily. Mike and Carol Brady presumably lived happily ever after, with their remarriage persisting into old age and ending only upon death of one of the spouses. However, images of stepfamilies headed by older adults are relatively rare in the media. Likewise, scholarship on families in later life also overlooked stepfamilies.

To mark National Stepfamily Day on 16 September to celebrate and support stepfamilies nationwide, we discuss key findings from our recent study charting the terrain of the stepfamily landscape during older adulthood. There are two main paths to stepfamily living for elders. Some of these stepfamilies were formed earlier in the life course and have persisted for decades. Others are unions formed more recently during later life and typically involve non-resident adult children.

Family demographic trends during the second half of life suggest that stepfamilies may be increasingly common among older adults. The doubling of the gray divorce rate, which refers to divorce among persons aged 50 and older, is contributing to the rise in single older adults who are eligible to form a remarriage or cohabitation. Those whose marriage dissolve through gray divorce are more likely to repartner than those who become widowed. Unmarried cohabitation among older adults has accelerated, quadrupling from less than 1 million to 4 million persons from 2000 to 2016. Remarriage is also more common. Just 19% of older married adults were in a higher-older marriage in 1980 whereas by 2015 the share had climbed to 30%.

We drew on national data from the 2012 Health and Retirement Study to establish a portrait of stepfamilies in later life. Nearly half of middle-aged and older (i.e., aged 50+) couples with children are in stepfamilies. That is, one or both of the spouse/partners is not the biological or adoptive parent of the other’s child(ren). Most older adult stepfamilies are headed by married couples (86%), but 14% are cohabiting couples. This union type distinction is important because married and cohabiting stepfamilies are unique in their stepfamily structure. Couples in married stepfamilies more often have children together (forming a blended stepfamily), whereas cohabiting stepfamilies more often include children from both partners’ previous relationships but lack a shared child.

Family demographic trends during the second half of life suggest that stepfamilies may be increasingly common among older adults.

Stepfamilies are already commonplace among older adults and this trend is likely to grow in the coming years. Nearly half of older couples have stepchildren, meaning they are part of stepfamilies. Older stepfamily couples have fewer resources and confront more health problems than do couples without stepchildren, raising important questions about how adults in stepfamilies navigate old age. Stepchildren may be less willing to provide support or care for stepparents than biological parents. Stepparent-stepchild dynamics might create additional stress for stepfamily couples. The high prevalence of stepfamilies in later life should encourage greater research and policy attention to stepfamily functioning and its implications for health and well-being in later life.

As we celebrate National Stepfamily Day, let’s be sure to encompass all stepfamilies, young and old alike. By moving beyond the stereotypical Brady Bunch stepfamily with young parents and school-aged children, we can shine a light on stepfamilies maintained and formed during the second half of life.

I-Fen Lin is Professor of Sociology at Bowling Green State University and Fellow of the Gerontological Society of America.

With funding from the National Institute on Aging, they have been working together to study the antecedents and consequences of gray divorce. A list of their collaborative research activities on the project can be found here.