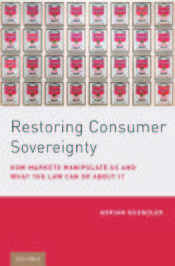 Restoring Consumer Sovereignty: How Markets Manipulate Us and What the Law Can Do About It

Conventional wisdom holds that the interplay of demand and supply of goods in a free market economy, as if through an invisible hand, provides us with material wealth. This vantage point is based on Adam Smith’s reference to an economy where most of mankind lived in small communities, where self-interest was restrained by a desire to be esteemed by others, and personal relationships bound overweening opportunism. In this economy, buyers had little trouble acquiring information to ascertain the quality of the goods they purchased and producers had no incentive to bamboozle customers into selling inferior merchandise. The butcher, the brewer, or the baker would have brought themselves into disrepute had they tried to fool, fleece, or in any other way ensnare their fellow citizens.

But conditions have changed. In an anonymous global marketplace, dominated by online services, credit card transactions, and complex products such as mortgage-backed securities, people struggle with very different psychological predicaments. The ties that previously held back unbounded self-interest and social distress have been lessened by unnamed corporate entities doing business with indistinctive faces in the crowd. While the personal nature of Smith’s small-scale economy made people care sufficiently about the consequences of their behavior on others, today’s marketplaces are mostly coined by asymmetric information that renders business transactions far more risky and uncertain. In this environment, it is much easier for sellers to exploit consumers’ ignorance than it was during Smith’s time.

The rapid proliferation of Internet shopping, Big Data, computer algorithms, and the like only amplifies this trend. Where the transparency of the online world has made it possible for consumers to compare the price and quality of almost any good at any time in any place, the ability to track, collect, and analyze consumers’ behavior has brought about a market dynamic in which manufacturers and vendors frequently know more about what they sell than their customers know about what they buy, and regularly know more about consumers than consumers know about themselves.

From the product manufacturer’s perspective, advertising and brand loyalty are key in this economy—goods and services, human relationships, and access to content are repackaged as cultural products and entertainment that engages consumers in a complete production of sights, sounds, tastes, aromas, textures, and smells in an effort to connect with them personally and memorably. Once a supplier-user relationship is established, a product manufacturer or seller holds an exclusive good that commands customer loyalty, protects goodwill, and carries a tremendous amount of advertising value.

The ties that previously held back unbounded self-interest and social distress have been lessened by unnamed corporate entities doing business with indistinctive faces in the crowd.

The point is that in this new economy, it becomes increasingly more difficult for consumers to steer commerce into a broader range of choices and back to the production of effective price reductions. If firms are able to amass personal data to an extent that they can ascertain without doubt which bias at what time will prompt consumers to purchase an item at the highest price they are willing to pay, the switch for consumers from one segment to another is going to become progressively more difficult to make. The stronger the consumer’s preference for a particular segment becomes, the weaker the check provided by the competitive system will be.

How, then, can we preserve the free choice of consumers to cast a vote with their wallets about which goods are “superior or inferior”—at the same time affording sellers the discretion to spend money to market their goods as they see fit?

A fresh look at Smith’s village economy may provide an answer. Consumers who are most loyal to a particular segment are most likely to have their voices heard by having some direct role in the producer’s decision-making process as to the conditions on which the producer sells, resells, distributes, or services its goods. This type of influence is inextricably linked to the account of the consumer who embeds their choices into a real governance decision by altering the terms of agreement in relation to their preferred segment. Put differently, enhanced participation in the organization of an economy might occur through a new mode of contracting in which norms of reciprocity and trust are reestablished by allowing consumers to participate in the creation of the firm’s own terms, or at least by encouraging them to do so in a manner that affords them an opportunity to get involved in shaping, reshaping, or altering the firm’s values.

A fascinating recent set of studies demonstrates that in the new economy, digital platforms such as Kickstarter, Tumblr, or Etsy are beginning to do just that. Their contracts are no longer simply accomplishing the common objectives of communicating information and establishing rules designed to produce incentives for performance and breach due to court-inflicted damages. Instead, they incorporate in their end-user contracting frameworks communication with and management of users. Such contracts complement the market’s discovery function in an important—probably in the most crucial—way: they facilitate agenda setting by loyal customers. They give consumers who are loyal to a segment the opportunity to shift the producer’s burden of inertia to constantly adjust the terms and conditions of sale and compel firms to engage in a real exchange with their clients.

Spurring incentives to encourage participation in contract formation does not thereby just create space for consumers’ opposition. Such incentives also give consumers a chance to affirm their loyalty to producers who in turn demand the consumers’ loyalty by selling particular worldviews, leaving an indelible imprint on the attitudes and beliefs of consumers. Most obviously, enhanced participation in setting the terms of agreement will bestow agency upon consumers, and along with it the dignity associated with choosing their own fate, which is why “choice” has long been an essential quality of free market economies.

Adrian Kuenzler is an Assistant Professor in the Faculty of Law, Zurich University, and an Affiliate Fellow at the Information Society Project, Yale University Law School. He is the author of Restoring Consumer Sovereignty: How Markets Manipulate Us and What the Law Can Do About It, a recent release from Oxford University Press.