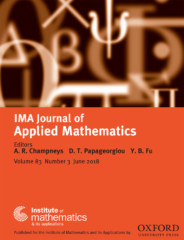 The IMA Journal of Applied Mathematics is a direct successor of the Journal of the Institute of Mathematics and its Applications which was started in 1965. It is an interdisciplinary journal that publishes research on mathematics arising in the physical sciences and engineering as well as suitable articles in the life sciences, social sciences, and finance.

Coffee is one of the most traded commodities in the world, valued at more than $100 billion annually. Even if you’re not an entrepreneur looking for the next big coffee venture, you’ll probably still care about how to make the 2.25 billion cups of coffee globally consumed every day as delicious as possible. Fortunately, scientists and researchers have partnered with large coffee companies in the hopes of understanding some of the complexities behind making a good cup of coffee: specifically, how coffee beans are roasted.

During the roasting process, partially dried coffee beans turn from green to yellow to various shades of brown, depending on the length of the roast. Once the residual moisture content within the bean dries up in the yellowing phase, crucial aromas and flavours are developed. However, the associated chemical reactions that produce these desirable coffee traits are highly complex and not well understood. This is partially due to the fact that the browning reactions linked to aroma and flavour development, called the Maillard reactions, is comprised of a large network of individual chemical reactions, where only preliminary understanding of the network’s construction exists.

However, the DAEM approach to chemical reaction groups only works when each of the reactions is happening parallel of one another. Because of this, we examine a simplified pathway of reactions involving sugars (which are linked to the formation of Maillard products) and separate groups of reactions to follow a progression of reactants to products. Specifically, we examine how sucrose first hydrolyses into reducing sugars, which in turn become either Maillard products or products of caramelisation. This division of this sugar pathway network allows us not only to fit each reaction subgroup with different parameter values, but also to determine that the hydrolysis of sucrose creates a “bottleneck” in the sugar pathway and prevents Maillard products from forming too early in the roast.

Even if you’re not an entrepreneur looking for the next big coffee venture, you’ll probably still care about how to make the 2.25 billion cups of coffee globally consumed every day as delicious as possible.

To model the local moisture content and temperature of the bean, two variables that crucially change which chemical reactions can occur during the roast, we use multiphase physics to describe how the solid, liquid, and gas components within the coffee bean evolve. This is a crucial difference to what has previously been done to model coffee roasting, as existing models often treat the coffee bean as a single “bulk” material. Additionally, unlike in previous multiphase models for roasting coffee beans, we allow the porosity of the bean to change according to the consumption of products in the sugar pathway chemical reaction groups. We also incorporate a sorption isotherm, an equilibrium vapour pressure specific to the evaporation mechanisms present in coffee bean roasting, in our model. Finally, to reduce the system variables to functions of a single spatial variable and time, we model a whole coffee bean as a spherical “shell”, while modelling a chunk of a coffee bean as a solid sphere.  This is another improvement to previous multiphase models, which disagreed with recent experimental data describing the moisture content in both roasting coffee chunks and roasting whole beans.

While largely theoretical, the Sugar Pathway Model provides a balance between the immensely complicated underlying physical processes occurring in a real-life coffee bean roast and its dominant qualitative features predicted by multiphase mathematical models. Additionally, industrial researchers can cheaply and efficiently use these multiphase mathematical models to determine the important features at play within a coffee bean under a variety of roasting configurations. While a basic framework for the roasting of a coffee bean is presented here, understanding the qualitative features of key chemical reaction groups allows us to get one step closer to that perfect cup of coffee.

Nabil Fadai is a postdoctoral fellow in mathematical biology at the Queensland University of Technology. He completed his DPhil in the Industrially Focused Mathematical Modelling program at the University of Oxford’s Mathematical Institute, where his work was supported in part by a Clarendon Scholarship. Originally hailing from the west coast of Canada, he discovered his love for applied mathematics as an undergraduate at the University of British Columbia in Vancouver. His research interests involve mathematical modelling of applications arising in industry and biology. Aside from the analyzing (and consuming) of coffee that went along with his DPhil research, Nabil is passionate about the pursuit of excellence in mathematics education and received a Departmental Teaching Award in 2016. He is one of the authors of "The influence of distributed chemical reaction groups in a multiphase coffee bean roasting model,"published in IMA Journal of Applied Mathematics.