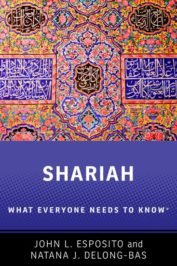 Shariah: What Everyone Needs to Know®

For many in the West today, “Shariah” is a word that evokes fear—fear of a medieval legal system that issues draconian punishments, fear of relegation of women and religious minorities to second-class citizenship, fear of Muslims living as separate communities who refuse to integrate with the rest of society, and fear that Muslims will seek to impose Shariah in America and Europe.

Candidates in American presidential elections, as well as far right anti-immigrant and anti-Muslim political parties in Europe, ultra conservative Christian leaders, and anti-Islam and anti-Muslim activists’ publications, blogs, and websites warn of the evils of Islam and Shariah and a clash of civilizations between Islam and the West, a fear that is often reinforced by sensational media headlines focusing on extreme behaviors by tiny minorities rather than the majority populations of law-abiding, contributing citizens. Indeed, a 2015 Media Tenor analysis of media coverage in America and Europe found that over 80% of stories on Islam were negative. As a result, many have come to believe that there is a “clash of civilizations” between Islam and the West, and fear a triple threat—political, civilizational, and demographic—further reinforcing fear of a “Shariah creep.”

In Europe, worries about the influx of Muslim refugees and immigrants, Muslim birth rates outpacing those of “native” populations, and visible symbols of Islam’s presence and perceived foreignness and difference—veils, beards, “Islamic dress,” halal meat, and mosques—have given rise to concerns about the loss of native identity, culture, and civilization, and have led to calls for restrictions on immigration in Europe. In Europe and North America, terrorist attacks by those claiming inspiration from ISIS further fuel fear of a threat from within, particularly that Muslims, both terrorist and mainstream, seek to impose Shariah on the West. As documented by organizations such as the Center for American Progress and islamophobianetwork.com, this fear was deliberately stoked between 2001 and 2012 by eight donors who contributed more than $57 million to promote fear of Islam, Muslims, and Shariah, claiming that they were working to overthrow the US Constitution and legal system and install a radical Islamic caliphate that will punish and subordinate all non-Muslims. In 2016, the Council on American-Islamic Relations (CAIR) and the Center for Race and Gender at the University of California, Berkeley, examined support for radical organizations. Their report, “Confronting Fear,” based on tax filings, showed that between 2008 and 2013, a US-based Islamophobia Network of some 33 groups received $205,838,077 in total revenue.

Demographic myths and fears are squarely overcome by reality. The Pew Research Center estimates that Muslims constitute only about 1% of the US population (3.3 million Muslims of all ages living in the United States in 2015). That share is expected to double to 2% by 2050. Even in Europe, Muslims currently constitute only 6% of the population, having grown about one percentage point per decade, from 4% in 1990 to 6% in 2010. This pattern is expected to continue through 2030, when Muslims are projected to make up 8% of Europe’s population—hardly the demographic threat proclaimed by nativists.

Similar to the demographic fear, the projected danger of Islamization and implementation of Shariah in the United States has also been based on a myth. In fact, no Muslim or Muslim organization has tried to implement Shariah to replace the Constitution or the American legal system. Yet, between 2010 and 2017, 120 anti-Shariah law bills had been introduced in 42 states. In 2017 alone, 13 states introduced an anti-Shariah law bill, with Texas and Arkansas enacting the legislation.

The volume of anti-Shariah bills begs the question of what, exactly, Shariah is, what it means to Muslims, and the varied roles that Muslims want it to play in the public sphere. Shariah is often–mistakenly–conflated with “Islamic law,” as it is implemented in certain countries today, typically citing those that most flagrantly violate international standards of human rights. Yet, Shariah and Islamic law are not the same. Shariah refers to the principles, values, and objectives found in the Quran and Muhammad’s example, including justice, protection of life and property, and care for the marginalized and dispossessed, among others. Many Muslims therefore maintain that Shariah, properly defined and understood, upholds the values of good governance, representative government, the public interest, social justice, human freedoms and rights, and individual accountability. While these principles and objectives do not change, what can—and should—change is Islamic law, or jurisprudence (fiqh), which is the human elaboration of how those values and objectives are to be put into practice concretely.

The volume of anti-Shariah bills begs the question of what, exactly, Shariah is, what it means to Muslims, and the varied roles that Muslims want it to play in the public sphere.

Ideally, as societies change and encounter new challenges and circumstances, so should Islamic law. In the past, Islamic law was developed for Islamic empires and societies with Muslim majority populations, not for Muslims living permanently in non-Muslim societies. While it was expected that Muslims might live for a time outside the lands of Islam, the expected ideal was to live in a Muslim society. Thus, there was no perceived need to develop a law for permanent minority communities.

Today, not only do some Muslims live as permanent minorities in non-Muslim communities, but Muslims living in Muslim-majority countries also often recognize the need for fresh interpretations that reflect new knowledge bases (such as advances in science and medicine), fields of expertise (such as technology), and even global challenges (such as climate change). As with other major faiths such as Christianity and Judaism, balancing respect for the past while addressing the needs of the present is a major concern for Muslim jurisprudents today. Rather than a threat or blind adherence to the past, the goal of reformers and their supporters is to reinstate the original purpose of Shariah: to serve as a source of guidance and protection for believers, wherever they live. That means, in instances where the laws in place are contrary to the objectives and values that Muslims uphold, they, like members of other faith traditions, can work for change through the legal processes that exist, respecting democratic processes and the pluralistic nature of society, and working together with others to introduce legislation and lobby the government concerning laws or appointments of Supreme Court judges.

John L. Esposito is University Professor, Professor of Religion and International Affairs and of Islamic Studies at Georgetown University. He is the author or editor of more than 45 books, including What Everyone Needs to Know About Islam and The Future of Islam and is Editor in Chief of Oxford Islamic Studies Online.

Natana DeLong-Bas is Associate Professor of Theology at Boston College and the author of Wahhabi Islam: From Revival and Reform to Global Jihad.

Together, they are the authors of Shariah: What Everyone Needs to Know®, published by Oxford University Press.

When and why does Islamic law oblige Muslims to fast?