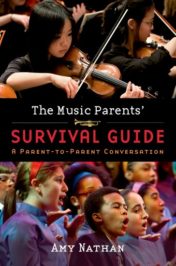 “Music is my life. I will never stop playing cello,” says Vanessa Johnson, one of the young people whose early experiences with music are featured in the book The Music Parents’ Survival Guide  (2014). Since more than four years have passed since it went to press, we are checking in with some youngsters to see how they are doing, focusing on those who participated in free after-school programs inspired by El Sistema, Venezuela’s music-education system which emphasizes ensemble playing right from the start.

In the Music Parents’ book, a photo shows Vanessa as a second grader finishing her first year in Cleveland’s El [email protected] program. She started on violin, then switched to cello, and takes private lessons now in addition to El Sistema classes. An eighth grader, she’ll age out of the program next year, but notes, “I’ll volunteer there once a week to teach younger kids.” The high school she’ll attend doesn’t have an orchestra, so she is auditioning for a youth orchestra to keep cello in her life. She feels the program helped her with school work. “Music is math. It has a lot of fractions. That helps me deal with fractions and everything else. But the best thing about music is it’s everywhere. When you walk down the street, you hear music, not actual music, but you hear your surroundings making music. I have thought about writing music. I’m good at improvising.”

Asia Palmer is also good at improvising, something this flutist has been doing in improvisational composition workshops offered by OrchKids, an El Sistema-inspired program in Baltimore. Asia’s mother, Lynette Fields, spoke in the Music Parents’ book about Asia and her brothers’ participation in this program back when they were in elementary school. Now in its tenth year, OrchKids has expanded beyond the early grades to keep older students involved, such as Asia and her twin brother, Andre, a percussionist, who have been with the program since it started. High schoolers now, they still take part in OrchKids workshops and ensembles, but have also won scholarships to study at Peabody Preparatory and at Interlochen Music Camp. “OrchKids opened doors for me,” says Asia. “It helped me get into Baltimore School for the Arts. If not for OrchKids, I would probably listen to one or two genres. My playlist is all over the place—Beyoncé, Cold Play, Brahms. I like to create my own music, a mixture of pop, funk, and jazz. Music helped with schoolwork, too, helps me concentrate.” As she told a New York Times reporter, “The program has given me a voice. I feel like I can be whatever, do whatever—strive.”

Their self-confidence aligns with results of two recent studies of El Sistema-inspired programs. A 2015-2017 Wolf Brown study of third-to-fifth graders in 12 El Sistema USA programs found marked differences between those youngsters and a group from the same grades, classrooms, and schools who weren’t in the music programs. El Sistema children showed gains in what the study calls “growth mindset. . . the belief that one’s basic qualities—such as intelligence or musical ability—are due to one’s actions and efforts rather than to a fixed trait or talent.” Growth mindset is thought to help with school success. The study also found that the El Sistema boys had higher rates of cooperation and perseverance than non-El Sistema boys. A study of a Los Angeles El Sistema program—YOLA (Youth Orchestra of LA)—found that YOLA students showed an increase in believing that “making mistakes—and working through them—is how one eventually succeeds,” another helpful mindset for academic success.

El Sistema USA has also made progress in the last four years. It started in 2009 as a loose alliance of El Sistema-inspired programs, but in 2016 became more organized with 501(c)3 nonprofit status and an official headquarters at Duke University, whose researchers helped the group define its core values, develop a membership process, and a list of new initiatives to pursue. With 85 member programs in nearly every state, El Sistema USA is introducing new training support for its teachers and is partnering with other music organizations to provide opportunities for older students who age out of the elementary school-focused after-school programs. “We are heavily represented in urban America now. I would like to see more representation in rural parts of the country,” says Katie Wyatt, El Sistema USA’s executive director. “Our next research question with Duke is to look at the impact of El Sistema programs on parents.” OrchKids has had a big impact on Asia’s mother, who works as a site coordinator at one of the seven schools that offer OrchKids programs. She has also learned to play recorder, one of the first instruments OrchKids students play. “I’m learning along with the kids,” says Ms. Fields.

Amy Nathan is an award winning author of several books on music including The Music Parents’ Survival Guide: A Parent-to-Parent Conversation, and two earlier books for young people, The Young Musician’s Survival Guide: Tips From Teens and Pros and Meet the Musicians: From Prodigy (or Not) to Pro. Her newest book—Making Time for Making Music—is for and about amateur musicians. A Harvard graduate with master’s degrees from the Harvard Graduate School of Education and Columbia’s Teachers College, she is the mother of two musical sons: one a composer and the other a saxophone-playing political scientist.