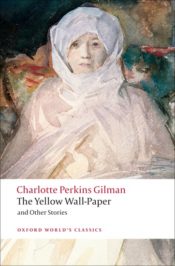 The Yellow Wall-Paper and Other Stories

Charlotte Perkins Gilman, author of the semiautobiographical short story, “The Yellow Wall-Paper,” was a first-wave feminist determined to live a fully actualized life of work for the common good. Born in Connecticut in 1860, she was a lecturer on ethics, labor, and feminism, and was also the niece of Harriet Beecher Stowe. Charlotte grew up in poverty and was particularly interested in bettering the economic straits of women. Her family moved so often that she was largely home-schooled and self-taught.

As a young adult Charlotte avidly read the work of British biologist Herbert Spencer, a contemporary of Charles Darwin who coined the term “survival of the fittest” to describe Darwin’s central idea from Origin of Species. Spencer took an evolutionary perspective on humans as well, and thought women to be cut out only for lives as mothers and helpmeets. And the relatively uneducated Charlotte, isolated within her family by their itinerant ways, was both fascinated and terrified by such an idea.

For, if Spencer were right, as motivated toward accomplishment as she was, her destiny was in the domestic realm. Did her intelligence (she’d taught herself to read by age three) mean she was an evolutionary anomaly? If so, would a husband ever accept her unquenchable desires to learn and to improve the economic status of women everywhere?

In preparation for the battles that her intellectual gifts were sure to present for her, Charlotte willed herself to become a superwoman. Programmatically, she exercised, read, and wrote. She became an impressive athlete. She started a religion—that didn’t, admittedly, seem to have much to do with God but focused, instead, on ethical living. She preached for protestant congregations. She wrote. And she began having some success with publishers.

Meanwhile, this powerhouse of a young woman struggled with episodes of depression. They had begun by age 15.

By the time she was 21, Charlotte had fallen in love with her best friend. The late 1800s was an age in which deep, romantic attachments among young women were common; generally such friendships included hugging, hand-holding, and sleeping together. But they weren’t usually sexual. Charlotte, however, did feel passion for her friend Martha, and was heartbroken when Martha became engaged to be married.

As Martha’s wedding approached, Charlotte formed a sexual attraction to Charles Walter Stetson, a penniless poet and painter who, she believed, had proposed to her only seventeen days into their acquaintance. (In his diary Walter interpreted the events of that evening very differently. Charlotte demanded that he declare his intentions. What he’d said, roughly, in response was that he was open to contemplating marriage with her if that was the direction their relationship took and if he ever began selling enough of his poems and paintings to support a family.)

Almost immediately, Charlotte and Walter fell into the habit of writing each other long, nightly letters. From hers, Walter learned that Charlotte had in mind for herself a productive life as a speaker and writer. From Walter’s, Charlotte learned that he expected a traditional marriage—one in which the wife was subservient, did not have intellectual pursuits, and would be available for sex whenever he happened to want it.

In their three years of courtship, Charlotte’s feelings for Walter fluctuated between hot and cold. She called the times of little feeling for him “relapses”—which suggests that they were episodes of her recurring depression. Occasionally during these years, Charlotte was prescribed cocaine and opiates. They greatly helped her mood. And in correspondence with at least one friend she suggested they use them together, as a sort of party drug.

Walter and Charlotte were married in 1885 and had a marvelous first night of lovemaking and a thoroughly pleasant morning after. Then things began to fall apart. After three months of marriage, Charlotte was pregnant. And after the baby was born she fell into a psychotic depression—the most horrible episode of illness she had ever encountered. She came under the care of a doctor Silas Weir Mitchell, the world’s leading expert on hysteria. He offered two cures.

Men he sent to the late-19th-century equivalent of Outward Bound. It involved strenuous outdoor exercise in the western mountains of the United States. Superbly athletic Charlotte might have thrived under Mitchell’s cure for “nervous” men.

Unfortunately the treatment for women was the “rest cure”: stay in bed and have no intellectual output whatsoever. Limit the intellectual input. Charlotte could have none of the drugs she had come to enjoy. And under the rest cure she didn’t improve a whit. In fact, as her rest continued she approached a madness she recognized as irremediable, and she refused further care. Scrambling for health, she made fundamental shifts in her marriage. As she returned to her intellectual pursuits, her health started to improve.

“The Yellow Wall-Paper” is a wonderfully gothic horror story of a woman going mad as she is forced to take an approximation of Mitchell’s rest cure. It is loosely based on what happened to Charlotte during her post-partum depression. But examining the actualities of her illness—and looking closely at her marriage, her social frustrations, and the treatment for hysteria she received—make the story even richer.

Was Walter a “nightmare husband” as she painted him in correspondence or was he the good, gentle man that her late-life autobiography described? Was Silas Weir Mitchell the fearsome physician that one passage of “The Yellow Wall-Paper” suggests he was? To what extent did the culture of Charlotte’s era contribute to what seems to have been a mental illness of biological origin? And what does Charlotte’s diagnosis of hysteria tell us about the struggles of women today whose physical symptoms of crippling pain or fatigue often get interpreted by doctors as hypochondriacal?

Rebecca Coffey is an award-winning science journalist and television documentarian. She contributes online and offline to national magazines such as Scientific American, Discover, and Psychology Today and to major market newspapers. Coffey is also a novelist and a humorist.