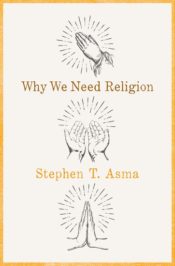 Why We Need Religion

Although often divided between believers and non-believers, or sacred and secular, spirituality is not dichotomous. Some believers accept the concept of God, but reject the literal existence of God. Some non-believers dismiss religious texts as fiction, but embrace the history and culture that comes with religion.

The below excerpt from Why We Need Religion examines these intermediate positions and explores how religious imagination helps us find connection and meaning in a mystifying world.

Mark Twain tells of the fascinating case of Reverend Thomas Beecher (brother of Henry Ward Beecher), who came from Connecticut to Elmira, New York (Twain’s summer hometown), to take charge of a Congregational church. Beecher served as pastor there for many decades, and became Twain’s friend.

“He had a fine mind,” Twain reports in his Autobiography. When he came to Elmira to take over the parish, Beecher was a “strenuous and decided unbeliever.” But, he reported to Twain, his upbringing required him eventually to come to believe in Christian doctrine, or he would never be happy or free from terrors. So, the atheist Beecher had accepted the par­ish confidently, knowing that he had made up his mind to compel himself to become a believer. Twain says that he was astonished by this strange confession, and found it stranger still that Beecher managed to pull it off. Beecher claimed that within twelve months of coming to Elmira, he had “perfectly succeeded in his extraordinary enterprise, and that thenceforth he was as complete and as thorough a believer as any Christian that ever lived. He was one of the best men I’ve ever known. Also he was one of the best citizens I’ve ever known.”

“The religious imagination has a powerful role in the con­struction of an unseen, meaningful world—one that structures life, even as it fails to deliver on its literal promissory notes.”

It’s hard to interpret this credulous compulsion, this self-imposed conversion. If we take Twain and Beecher at face value, then the conver­sion represents a kind of tour de force of the will-to-believe. But belief on demand seems, forgive the irony, hard to believe. This is an important issue for us, because we will be considering the possibility of religious belief or commitment, without satisfaction of truth requirements, and even in the face of truth failure.

There is full-on belief, without doubt. And there is complete disbelief. But there are also many fine-grained intermediate positions that need more exploration. The religious imagination has a powerful role in the con­struction of an unseen, meaningful world—one that structures life, even as it fails to deliver on its literal promissory notes.

Philosopher Jean Kazez writes, “I am a religious fictionalist. I don’t just banish all religious sentences to the flames. I make believe some of them are true, and I think that’s all to the good.” At her family’s religious feast, the Seder, she pretends there is a deity to be praised for various things. “I like pretending the Passover story is true,” she explains, “because of the continuity it creates—it ties me to the other people at the table, past years that I’ve celebrated Passover (in many different ways, with different people). I like feeling tied to Jews over the centuries and across the world. I also like the themes of liberation and freedom that can be tied to the basic story.”

Many people take a fictionalist approach to God. They accept the exis­tence of God, but they do not really believe God exists. As philosopher William Irwin puts it, “They accept that God is love and that (the concept of) God has shaped human history and guides human lives, but when pinned down they admit that they do not really believe in the actual exis­tence of such a God. Their considered judgment is that the existence of God is not literally true but is mythologically true.”

Many nonbelievers dismiss this kind of fictionalism as bad thinking, but many of these same nonbelievers accept the moral power of imagination. In his song Imagine, John Lennon famously entreated us to imagine “no countries,” “no religion,” “no possessions,” and a subsequent “brotherhood of man.” And Martin Luther King, Jr. invited us to project a “dream” into future reality, and make it so.

Imagination helps us find empathy for other people, by putting us in their shoes. It helps us envision an alternative reality where greater social justice exists. Dreaming our ideals helps us organize our daily lives and institutions to bring about those ideals. But, of course, the imagination is not intrinsically positive and affirmative. Nightmares are also dreams, after all. In contrast to the egalitarian dreams of liberalism, imagination-based xenophobia drives cultures to imagine the worst, and fear tears apart com­munities and fosters “us versus them” dynamics. So, the religious imagination is a double-edged sword, and we must try to ascertain which direction it is cutting.

Stephen T. Asma is a Professor of Philosophy and Founding Fellow of the Research Group in Mind, Science, and Culture at Columbia College, Chicago. He is the author of On Monsters: An Unnatural History of Our Worst Fears, Stuffed Animals and Pickled Heads: The Culture and Evolution of Natural History Museums, and most recently Why We Need Religion.

Being Church as Christian hardcore punk