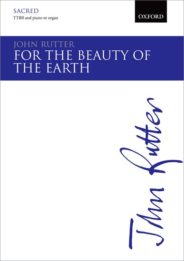 For the Beauty of the Earth

During a ‘question and answer’ session at a recent music convention, four contemporary composers of choral music faced a plethora of musicians from all types of backgrounds and traditions. Amongst a selection of interesting and searching questions asked, one brought an eerie silence to the room. The question was: ‘Would you consider writing for a male choir?’

The reaction of the panel was fascinating. Two of the composers looked confused and bemused, and didn’t respond. One of the composers responded readily with ‘‘I’d be delighted to write for any choir who was interested in my music.’’ The final composer was heard to guffaw and grimace in a way to suggest that something rather distasteful had happened.

Male choirs in the UK are, perhaps like the ‘choral society’, facing an uncertain future—as demonstrated by the panel of composers’ attitudes as described above. Borne out of working for religious environments that now cease to be; their very base of existence is no longer deemed popular by younger generations.

Steeped in tradition, they are often unaccepting of contemporary choral repertoire and staunchly at home performing the same works for many years. There is little commissioning of new and original works for the unique sound of a male choir, and they generally keep a proud distance from choral or conductor education.

It is easy to see why the reputation of the male choir stymies its own recruitment of members, stifles its vocal and choral development, and threatens its very existence as a tradition in the UK. To an extent, male voice choirs in the UK have become a parody of themselves, whereas this has been avoided in other countries.

Despite this, it is hoped that even the most steadfast opposers of single sex choirs would not wish to see the male choir tradition disappear forever. But how can they survive?

Members of a male choir are welcomed into a micro-society that is warm, caring, supportive, humorous, and very sociable. Most male choirs have a visible set of rules that govern how it is run, and a distinct structure with a visible leader in its conductor or musical team. Members are expected to perform from memory, having learnt up to eighteen pieces of music by heart (per concert); high levels of loyalty and commitment are the norm.

But choirs thrive on always looking forward and developing their skills and musicality in new, exciting and contemporary ways. Audiences cannot fail to be impressed by a choir that has exciting and ambitious musical plans. Contemporary choirs work with composers and publishers in producing new music to premiere whilst also being unafraid to perform much loved choral treasures. They reach out to local communities to co-work with them in supporting new ventures, competitions, workshops and educational projects.

This attitude is something that the traditional male choir might struggle with, and the question is whether is it time for them to embrace the inevitably required paradigm shift in thinking to ensure that they can remain a successful, appropriate, and appreciated part of today’s society? At the very least they should be asking themselves:

The former has been ‘reborn’ with an ambitious artistic vision which points the way to a great future whilst the latter has actively commissioned and championed new and contemporary music for male voices.

Both choirs have readily embraced good vocal health and development at the core of what they do and this ‘new core ideals’ policy has attracted noticeable numbers of men in their twenties and thirties—having clear goals and a demonstrative vision is attractive and bears much fruit. And both choirs do not necessarily spend a whole concert singing ‘on a stage’ but might perform in all sorts of shapes and formations, seeking the best performance per musical item.

Perhaps it is time for all of us to take stock with regard to this treasured tradition of the male voice choir, support it, and encourage it into fusing with contemporary choral music, whilst preserving its musical heritage for future generations to appreciate and enjoy.

Edward-Rhys Harry is a conductor and composer who works across the UK and internationally with choirs and orchestras of all abilities. His choral music is performed widely. A proud Welshman, he is passionate about vocal health, championing new choral  music and education for choral conductors. He is the musical director and principal conductor of London Welsh Male Voice Choir and conductor emeritus of Sandgrenska Manskören in Sweden. A recording of his works for male voices entitled ‘Don’t Go Chasing Shadows – music for male voices’ is due for release in early 2019.