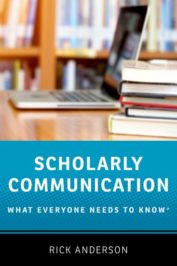 Scholarly Communication: What Everyone Needs to Know®

Is there really anything that everyone needs to know about scholarly communication? At first blush, the answer might seem to be no. Scholars typically communicate mostly with each other: they create articles, books, white papers, and other scholarly products, not usually expecting that those writings will reach millions of people and directly affect the public’s collective mind and discourse, but more often with the hope that their colleagues will read what they’ve written and that their ideas and discoveries will shape the discourse within their fields, and will eventually make the world a better place in that way.

The more I thought about it, though, the more I realized that scholarly communication is nowhere near as self-contained as one might think, and that it’s important for the general public to have a better understanding of how it works.

Why? Two reasons come to mind.

First, anyone who goes to university—and as of 2018, that’s roughly two out of three Americans—interacts with the scholarly communication ecosystem both regularly and directly during his or her higher-education experience. Students are assigned to read articles from peer-reviewed journals, consult scholarly monographs published by university presses, conduct library research, do literature reviews, learn how to evaluate journal quality, think about the scientific method, and so forth. If they move on to graduate school their interaction with scholarly communication becomes deeper and more comprehensive, and they very often become published scholarly authors for the first time. An understanding of how scholarly communication works can only help those who are going to spend formative years of their young adulthood (and possibly the rest of their lives) both contributing to and drawing from the well of scholarly and scientific literature that is that system’s lifeblood. Being an advanced student means being a scholarly communicator, and to participate effectively in scholarly communication you need to know more than just the difference between a peer-reviewed and a non-peer-reviewed journal: you need to have at least a general idea of how journals are evaluated, how different kinds of book publishers work, how copyright works (and doesn’t work) in the academic context, and so forth.

Everyone… is a consumer of what the scholarly-communication ecosystem produces.

Second, everyone else—regardless of whether they ever attend university—is a consumer of what the scholarly-communication ecosystem produces. A particular individual may never read an article in a peer-reviewed epidemiology journal, but at some point, she is certain to be encouraged to heed the judgment of her doctor in undergoing, say, vaccination or a mammogram based on the findings that her doctor has read in such journals. Another individual will read an article in a popular magazine that touts a researcher’s claim for the health benefits of pomegranate juice and will do a better job of evaluating that claim if he has some grounding in how scientific findings are evaluated and published. Yet another one will be told by her friend that “studies have shown” that Christopher Marlowe actually wrote Shakespeare’s plays, and may want to investigate this claim for herself—this is the most common, everyday context in which a baseline understanding of scholarly communication is likely to be helpful. People with little to no understanding of how scholarly communication really works open themselves up to manipulation on the part of anyone who begins a statement with “studies show” or “the science says.” Those can be intimidating phrases—but if you have a basic understanding of how science gets published and how to discriminate between good and bad studies, you are empowered to challenge and evaluate such statements.

In short, no one is completely untouched or unaffected by scholarly communication. The practices and products of scholars and scientists affect us more or less constantly in our daily lives, though often in ways that aren’t immediately recognizable: they affect the ways in which newscasters talk about the latest “miracle food” discovery, the ways politicians promote their economic plans to voters, the advertising language we see in magazines and online, and the services offered to us in doctors’ offices. Making those impacts, however quiet and subtle they may be, more easy to detect and thus to think critically about is important. And who knows—some readers might even find that a topic they would otherwise have dismissed as hopelessly obscure and boring (copyright law, say, or the machinations of predatory publishers) is surprisingly interesting. Who knows, maybe they’ll decide to become scholarly communicators themselves. An author can hope.

Rick Anderson is an academic library administrator, author, and speaker with 25 years of experience in scholarly communication. He has served as the president of the North American Serials Interest Group (NASIG) and of the Society for Scholarly Publishing, and is a regular contributor to the Scholarly Kitchen blog. Anderson was the 2013 recipient of the HARRASSOWITZ Leadership in Library Acquisitions Award. He is the author of Scholarly Communication: What Everyone Needs to Know®, published by Oxford University Press.