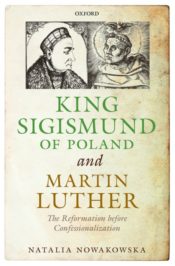 King Sigismund of Poland and Martin Luther: The Reformation before Confessionalization

Last year, Playmobil issued one of its best-selling and most controversial figurines yet, a three-inch Martin Luther, with quill, book, and cheerful pink plastic face. This mini-Luther celebrated the 500th anniversary of the Reformation: throughout 2017, in Germany and beyond, a flood of re-enactments, conferences, and state ceremonies remembered the Saxon monk’s opening attack on medieval Catholicism in autumn 1517. The packed “Luther Year” has now drawn to a close, but 2018 marks 500 years since the Lutheran Reformation’s arrival in the kingdom where it was to enjoy some of its most spectacular, ground-breaking early successes—Poland.

Poland has a reputation for being impeccably, historically Roman Catholic—the land of Pope John Paul II, Jesuit churches and popular folk piety. A Lutheran Poland, as part of the Protestant world, today requires some serious re-imagining of European history. Yet, however improbable it sounds, Poland has a claim to be one of the major birthplaces of the European Reformation—as scholars back in the 19th century well knew, penning thick tomes on this problem. It was the 20th century’s total wars, extreme nationalisms, and crazy-paving redrawing of borders which obscured this story from view, removing it from the familiar Reformation histories we tell, retell, and remember today.

There is no Playmobil figure (yet) of Jakub Knade, the Dominican who in 1518 cast off his friar’s habit and started to preach Luther’s message in Danzig/Gdańsk, the Polish monarchy’s principal port. He was a subject of Sigismund I, king of Poland and grand duke of Lithuania, scion of the powerful Jagiellonian dynasty. Sigismund I’s Poland stretched, in an awkward diagonal, from the Carpathians of today’s western Ukraine, to the affluent Baltic cities of Prussia.

During the reign of Sigismund I (1506-1548), his kingdom was, almost uniquely, shaken by four different waves of Reformation upheaval: urban, legal, peasant, and elite. During the urban wave, the kingdom’s Baltic ports were seized by religious revolutionaries in 1525, backed by crowds of sailors and fishwives, in violent Reformation city revolts unparalleled in Europe. In the case of the legal revolt, King Sigismund stunned the pope in 1525 by turning the lands of the Teutonic Order (crusading monks) into a vassal territory for himself, ruled by a new Lutheran duke of Prussia. Christendom’s very first legally Lutheran state was thus found within the Polish monarchy. The peasant upheaval also took place during 1525, when armies of Luther-quoting rebel peasants rampaged through King Sigismund’s Prussia in a full-scale Reformation uprising by the lower orders. And during the elite wave, Polish towns and nobles eagerly invited Lutheran preachers, tutors, and printers into their midst, where they were protected by the kingdom’s most powerful magnates, such as Łukasz Górka of Poznań. Polish undergraduates were a common sight at Luther’s Wittenberg University. In the 1530s, observers across Europe—from Vienna to London—were convinced that after old Sigismund’s death, Poland’s next king would be a Lutheran, who would take the radical step of announcing Europe’s first Lutheran monarchy. Besides the Holy Roman Empire itself (Germany), no other country was as rocked by Luther’s message in the 1520s as Poland.

This powerful episode from the very genesis of the European Reformation has much to tell us, precisely because it was located at the historic cutting edge, right on the threshold of a brave new world. It is the reactions of King Sigismund—with his reputation for piety and good sense—his counsellors and bishops, which are just as significant as the events themselves. The majority of suspected Lutherans were ignored, or allowed to walk unpunished from court-rooms, and they certainly did not inspire the same existential horror that medieval heretics had. Modern Polish historians and politicians have long prided themselves on the country’s (claimed) traditions of religious toleration. But King Sigismund was not a liberal avant-la-lettre; he simply perceived the Reformation rather differently to us.

Lutheran rebels who took up arms, such as Jakub Knade, were ruthlessly hunted down by the Crown. But the peaceful majority of Luther-sympathisers were regarded as bookish dissidents, anomalies, misguided but genuine fellow Christians, members of a late medieval church which already accommodated an impressive variety of pieties and ideas: not as enemies of Crown or society. Paradoxically, the ruling elites in Poland saw most Lutherans as fellow Catholics—whereas Lutherans were perfectly clear in their own minds and writings that they had rejected the Roman church entirely as a hellish darkness. Poland may not have ended up Lutheran by 1600, but it is a historical laboratory in which we can see how late medieval Christians imagined, and brought, both Lutheranism and reformed Catholicism into existence.

This year, as the snows melt in Central Europe, tourists will walk under the medieval cranes of Danzig’s waterside, or step over the plaque in Krakow’s market square marking the 1525 creation of Ducal Prussia (upstaged by men in dragon costumes, buskers, and flower-sellers), or take tea in Poznań’s Egyptology museum café, where Łukasz Górka once dwelt with his Lutheran household. They may be coming to contemplate other histories—ancient, Renaissance, Jewish—but all around them are spaces, sites and ghosts integral to the story of how Europe slipped into two polarised, warring churches, leaving behind a late medieval culture which had stretched from Lisbon to Lublin. The story of Martin Luther and King Sigismund, then, is a story of lost identities, new identities, and alternative narratives in European history—a timely lesson in how revolution, and cultural fragmentation, begins.

Natalia Nowakowska is Associate Professor in Early Modern History at the University of Oxford, and Tutor and Fellow at Somerville College, Oxford. She is the author of King Sigismund of Poland and Martin Luther: The Reformation before Confessionalization.