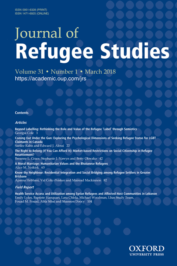 Journal of Refugee Studies provides a forum for exploration of the complex problems of forced migration and national, regional and international responses. The Journal covers all categories of forcibly displaced people.

The UN Refugee Convention promises safe haven to individuals who, having crossed an international boundary, can prove a well-founded fear of persecution based upon one of five categories: race, religion, nationality, political opinion, or membership in a particular social group. Since its framing in 1951, the Convention has been revised several times – in 1967, 1969, 1984, and 2011 – to also include those fleeing war or political strife; however, the five original categories remain unchanged. Least well-defined of these categories, and most ambiguous among them, is ‘membership in a particular social group.’ This category was originally developed to build flexibility into the Convention in the event of unforeseen circumstances. Since the 1990’s, however, ‘membership in a particular social group’ has been the basis for asylum cases for women fleeing domestic violence and/or female genital cutting, and for LGBT individuals persecuted in their countries of origin for their non-conforming sexual or gender identities.

According to a recent report by the United Nations, violence against LGBT persons exceeds other forms of hate crimes. LGBT asylum seekers have reported physical as well as emotional abuse, shunning, extortion, assault, forced heterosexual marriage, forced participation in conversion therapy, and so-called “corrective” rape (Alessi et al. 2017; Shidlo & Ahola, 2013). Such acts of violence may be perpetrated with impunity by a range of actors, including families, community members, religious leaders, and state officials (Alessi, Kahn, & Chatterji, 2016; Alessi et al., 2017; Office of the United Nations High Commissioner for Human Rights, 2015). Given the severity of persecution, many LGBT individuals have been forced to seek protection in places such as Canada, the US, and countries in the European Union. To gain asylum in these countries, LGBT petitioners must not only prove a well-founded fear of persecution, they must also prove that this fear is based on their membership in a sexual or gender minority group and that they are, in fact, members of that group. Such claims may be made before a representative of UNHCR in a country of transit outside of the host country, such as Turkey, a common gateway to Europe, the US, or Canada. Alternatively, the petitioner may appear before an asylum adjudicator within the host country.

But how does one prove lesbian, gay, bisexual, or transgender ‘membership’? It must be remembered that these categories were constructed in the West. Thus, they may have very little relevance to individuals from societies where non-conforming expressions of sexual orientation or gender identity take on very different meanings.  In many contexts, failure to conform with societal norms can drive sexual and gender minorities into hiding, or into “passing” as heterosexual or cisgender, in an effort to protect themselves from honor killings, communal violence, or police arrest. Paradoxically, once the LGBT individual is in the host country, asylum adjudicators may expect them to be “out and proud.” This can mean producing evidence that matches the adjudicator’s assumptions of how LGBT people look or behave (e.g., photographs showing erotic relationships with same-sex partners, postings on social media of participation in the local gay pride parade, or certificates of attendance at LGBT organizations), as if there is one way to be lesbian, gay, bisexual, or transgender.

Well-meaning immigration attorneys representing LGBT asylum seekers in their immigration hearings can enthusiastically urge their clients to produce this proof, whatever the emotional cost. They may probe their client’s most intimate moments, seeking lurid details of sexual encounters with same-sex partners because adjudicators may well be looking for such stories. They may encourage disclosures of sexual assaults, including childhood sexual abuse, in order to build their case. Given the state of decision-making, this may be perceived as necessary. And, indeed, it may be necessary. However, being “forced” to come out and to disclose past sexual abuse before they are ready can produce negative mental health consequences in LGBT asylum petitioners. Furthermore, these consequences may persist even after the asylum has been granted.

Interestingly, UNHCR’s Guidelines on International Protection, Number 9, published in 2012, explicitly states that “there is no requirement that members of the [LGBT] social group associate with one another, or that they are socially visible, for the purposes of the refugee definition.” Canada’ Immigration and Refugee Board released its guidelines on sexual orientation and gender identity expression in 2017, which includes a range of stereotypes—including expectations that sexual or gender minorities look or act in a “particular manner”—that should be avoided by adjudicators hearing LGBT asylum claims. Despite such encouraging developments, there is a long way to go before directives are implemented on the ground. This will require a fundamental shift in the hearts and minds of adjudicators so they may move beyond preconceptions of what LGBT looks like and consider instead how well-founded fear is experienced, day-by-day, by sexual and gender minorities living their lives in hostile contexts. Only then will immigration attorneys ease up on their clients and seek to balance legal needs with their client’s mental health and well-being.

Sarilee Kahn, PhD, MSW, MPH is Assistant Professor at McGill University’s School of Social Work where she studies the intersection of psychological trauma, culture, migration status, religion and identity for survivors of communal violence. She has served as an expert witness in immigration hearings on behalf of LGBTQ asylum seekers.

They are the authors of the article 'Coming Out Under the Gun: Exploring the Psychological Dimensions of Seeking Refugee Status for LGBT Claimants in Canada' in Journal of Refugee Studies.