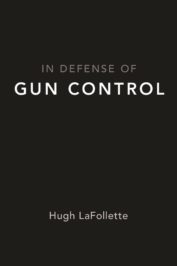 In Defense Of Gun Control

In the public debate over gun control, many people talk as if our only options are to support or oppose it. Although some endorse more expansive views, many still talk as if our choices are quite limited: whether to support or oppose a small number of specific gun control proposals–for example, banning assault weapons. Both suppositions oversimplify and distort our choices. In reality, we face three intermingled policy questions: Whom should we permit to own firearms? Which guns should they be permitted to own? How should we regulate the guns they may own?

Virtually no one thinks we should permit everyone—two-year-olds, former violent felons, or the demonstrably mentally ill—to own guns, nor that we should permit private citizens to own all types of firearms—for instance, bazookas and grenade launchers. Finally, most everyone realizes we need additional regulations: when, where, and how those who legitimately own firearms can purchase or obtain them (a licensed dealer or out of the trunk of the local crime boss’s car?); how, when, and to whom they can sell or transfer them (can I sell them to known felons or give them to my six-year-old nephew?); whether (and how) people can carry them in public (not on airlines); and finally, how people store guns and ammunition (must they be in gun safes or can they be tossed willy-nilly on the front porch?).

Once we acknowledge the complexity of these issues, we see that any resolution will be difficult to identify and execute. We must decide whether people, and whom specifically, have a right to bear arms, what kind of right they have, and how unfettered the right is. We must evaluate divergent empirical evidence about (a) the role of guns in causing harm, and (b) the extent to which private ownership of guns can protect innocent civilians from attacks by criminals, either in their homes or in public.

Since we have less than indubitable evidence to resolve these issues, we must decide how to proceed despite some uncertainty. Although this might seem to be a shocking admission, it is actually old hat for policy regulations. When we initiated policies to lessen the number of automobile deaths and the severity of injuries, we had only vague notions about what policies and practices might work—installing seat belts, lowering speed limits, requiring states to made highway lanes wider, or encouraging car manufacturers to install systems that warn drivers when they drift into an adjoining lane. We tried various policies and discovered that some worked.

Some advocates for particular gun control proposals transform what is a legitimate aspiration into a suggestion that they will achieve more than they possibly can. For instance, some people talk as if banning assault weapons would eliminate mass shootings. This suggestion is not only false, it is strategically imprudent. After the next mass shooting, people might infer that the ban is useless. This response could be avoided if advocates were more circumspect. No achievable policy can eliminate such shootings, at least not in the US where so many firearms are in circulation. What we can strive for are policies that diminish their frequency and lethality. Moreover, since spree shootings are a miniscule portion of the total number of gun homicides, advocates of assault weapon bans should acknowledge that bans would have a minimal effect on overall gun violence. Additional policies would be required.

Pro-gun advocates also oversimplify the debate. Many standardly reject gun control proposals as depriving law-abiding gun owners of the ability to defend themselves. However, to say that someone is “law-abiding” is simply to acknowledge that he or she has not yet been convicted of a crime. However, some people who have not previously been convicted of a crime end up committing. It is especially true for crimes of passions, such as when someone is jealous, drunk, clumsy, or mistaken. This phenomenon is relevant to the current US debate. Many spree killers—for instance, the shooters at Virginia Tech, Aurora, Orlando, Las Vegas, and Parkland High—obtained all or most of their guns legally. The shooters were, up until the time of their respective attacks, law-abiding citizens. Yet presumably most people would like to identify ways to keep guns—at least some guns—out of the hands of those who could become spree killers.

Regardless of what side you fall on, the gun control issue will not be solved by oversimplifying matters. Thoughtful, nuanced thinking is essential to achieve a resolution.

Hugh LaFollette is currently Cole Chair in Ethics at the University of South Florida St. Petersburg. He mainly teaches and writes in ethics, especially practical ethics. He is author of three others books, editor of many more, and Editor-in-Chief of the International Encyclopedia of Ethics. He is currently preparing the second edition of that eleven volume reference work.