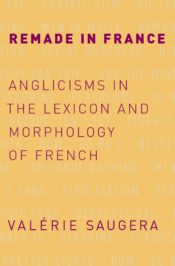 Remade In France: Anglicisms in the Lexicon and Morphology of French

English loanwords have been pushing their way into languages worldwide at an increasing rate, but no language has a history of national resistance as staunch as French.

In France where language is an affair of state, opposition to Anglicisms, fronted by the Académie française, is explicitly linguistic (Anglicisms are superfluous and faddish items which must be replaced by French words) and implicitly political (Anglicisms are imports from the hegemonic United States, and the donor status of English exists at the expense of French). Whether polluters or occupiers, they are nevertheless before all new words that augment the lexicon, often for the short term and sometimes for the long term.

The escalating global influence of English raises the issue of novel and deeper contact outcomes that go beyond well-known cultural loans (le Big Mac) and computer and Internet terminology (le big data). The latest period of vigorous contact beginning in the 1990s has its own complex linguistic characterization, including the four singular outcomes:

Global English has brought in a greater volume of loanwords, which largely accounts for the perception of “too much English.” However, frequency counts in one year of the daily Libération indicate that dictionary-unsanctioned Anglicisms correspond to numerous types but very few tokens (typically fewer than three). Measuring the lifespan of Anglicisms also shows that their usually short life provides them scant opportunity to replace or permeate the lexicon of French. Their brief presence is belied, however, by the lexical vitality they generate in the recipient language.

(2) A diversity of borrowing types

(3) Reinterpretations and manipulations of loan materials

English words embark on another life cycle in French, which may be very different from their donor life. Changes are, in fact, a common pattern: the forms may change meaning, shift word class, become informal, supply emphasis, deliver humor, etc. Adjectival XXL, for instance, entered the 2014 edition of the Petit Robert dictionary with both the literal donor meaning of a clothing size (sweat XXL “XXL sweatshirt”), and the figurative recipient meaning outside of the clothing sphere, which is ubiquitous in the press (projet XXL “large-scale project,” hommes XXL “plus-sized men,” arrogance XXL “outsize arrogance”). Bilingual compounds represent a productive case of manipulation: they arise when an English compound is used as a model for coining new words in the recipient language. These compound Anglicisms provide patterns for open series of bilingual compounds in French (serial killer > serial buteur “serial scorer,” it girl > it coiffure “it hairstyle,” Watergate > Penelopegate).

(4) Beyond words: borrowing of English phrases

The current contact period with English is characterized by a non-negligible qualitative extension, from the word to the phrase (craquant, isn’t it? “cute, isn’t it?”). The scenario here is even more complex, for these phrases indicate that while they are borrowed as chunks, they can subsequently be revisited in original ways in French, as is the case with witty expressions détournées: no man’s hand < no man’s land to describe a skillful handball player; FR God save the green < EN God save the Queen).

These four patterns characterize the emergence of innovative lexical phenomena in a setting of virtual contact whose (French) community is not bilingual in English in any conventional way. French Anglicisms show the open-ended nature of the lexicon, and are testament to both the ephemeral nature of individual words and the replicable nature of borrowing. In ten years’ time, many of the currently circulating Anglicisms would surely have disappeared and new items and motives for borrowing would have emerged. English influence, far from debasing French, as is often claimed, contributes to its vitality, while serving functions such as providing short-lived neologisms, conveying linguistic humor, or fueling slang.

Valérie Saugera is Associate Professor of French at the University of Connecticut. She is the author of Remade In France: Anglicisms in the Lexicon and Morphology of French, published by Oxford University Press.