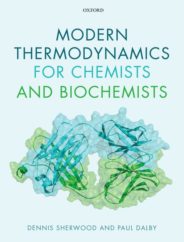 Modern Thermodynamics for Chemists and Biochemists

It’s nearly 60 years since C.P. Snow gave his influential “Two Cultures” lecture, in which – among many other significant insights – he advocated that a good education should equip a young person with as deep a knowledge of the Second Law of Thermodynamics as of Shakespeare. A noble objective, but why did Snow highlight this particular scientific law? There are many others – such as those associated with Newton or Einstein – that are more well-known. Isn’t the Second Law of Thermodynamics rather obscure?

Well, unless you happen to be a full-time hermit, living in total isolation, then you experience the Second Law much more frequently than you might realise.

For example, when you’re in a hurry, and you throw your mobile phone charger into a bag and run off. Later, when you retrieve the charger, the cable is tangled. How did that happen? Is there a tangle-gremlin in your bag, delighting in making the tangle as scrambled as possible?

Another example: when you’ve been working really hard all day, and you open the door of a teenager’s room to find yourself reeling from the sight. Why doesn’t Sam ever put clothes back on the hangers, and into the drawers? How can Alex make such a mess?

These are two every-day examples of the Second Law of Thermodynamics. Why so? Because the key feature of this law is that many processes naturally take place in one direction only: it is ‘natural’ for a charger cable to become tangled; it is ‘natural’ for a teenager’s room to become untidy. These ‘natural’ processes occur ‘all by themselves’, and do not require specific explanations or causes – they just happen.

What is ‘unnatural’ is for the change to take place the other way: untangling that cable doesn’t ‘just happen’, any more than a teenager’s room will become tidy ‘all by itself’, however much we might wish that it did!

More fundamentally, the Second Law tells us that ‘ordered’ states (the neatly coiled cable, the teenager’s tidy room) will, of their own accord, become ‘disordered’ (the tangled cable, the untidy room). This transition from order to disorder is a ‘natural’ phenomenon, and the only way for the transition to take place the other way, from disorder to order, is by consuming energy.

So, once you’ve untangled the cable and tidied that irksome room, you sit down and relax. Maybe you’re watching a football match on the television; maybe you’re listening to Dave Brubeck. And, once again, you are experiencing the Second Law. Think, for a moment, about a high-performing team — say, a top-flight football club or the Dave Brubeck Quartet. A key characteristic of all high-performing teams is that they sustain a high degree of order over time. The football players aren’t ambling randomly around the pitch: rather, the movements of all the players, and of the officials too, are highly co-ordinated, as determined by what is happening in the game at any moment; and even if the bass player in the Brubeck quartet is improvising, that improvisation is done in the context of the overall piece, blending imaginatively with the other players. High-performing teams sustain order over time. Football teams. Jazz quartets. That team you’re part of at work.

But is that team at work a high-performing team or just a bunch of people thrown together and called a ‘team’ because that’s the language of the work-place? My experience is that very few work-place teams are ‘high-performing’ in the sense I am using the term – and once again I come back to the Second Law. As I have described, the Second Law states that the ‘natural’ tendency is for order to degrade into disorder. This implies that high-performing teams are rare, and difficult to sustain. At the start, of course, ‘teams’ are formed in a spirit of optimism, but, sooner or later, they can fall apart. People bicker. Somebody fails to deliver. Someone else thinks the team leader is doing the wrong thing. What started with the noble intention of being a high-performing team degenerates into a rabble, with a small core of the conscientious doing all the work so that the team is not seen from the outside to fail.

This is the Second Law – from order to chaos. Unless. Unless there is a continuous flow of energy into the team to counteract the ‘natural’ process of disintegration, to sustain order over long periods of time, the order that is a fundamental characteristic, and requirement, of a high-performing team.

Where, then, does this energy come from? Firstly, from you. Each team member has an obligation to keep their own energy up, for we all know how debilitating it is to work with someone else who is politely described as ‘high-maintenance’. And secondly from the leader. A key — if not the key — attribute of leadership is the injection of energy into others. And many of the words we use to describe great leaders —inspirational, enthusiastic, committed, energising — reflect this. Which explains why leadership is so tiring.

So every time we untangle that cable, tidy that mess, or are part of a team, we are experiencing the Second Law. Maybe C.P. Snow’s exhortation that understanding the law should be part of everyone’s education has rather more validity than we might initially think.