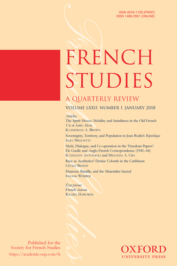 The journal publishes articles and reviews spanning all areas of French Studies, including language and linguistics, all periods and aspects of literature in France and the French-speaking world, thought and the history of ideas, cultural studies, film, and critical theory.

French and Francophone Studies is a vibrant and diverse field of study, in which research on nineteenth century literature, and research from the perspective of postcolonial theory, are thriving—and indeed represent particular areas of growth. What does it mean, then, to argue for a “postcolonial nineteenth century”? It would certainly be misleading to see the two areas as completely divorced or discordant. Postcolonial theory was, in part, born out of nineteenth-century studies and an interest in colonial discourse, with a comparative literary focus ranging across English- and French-language texts. This was, after all, among the principal specialisms of Edward Said, author of one of the founding texts of postcolonial studies, Orientalism, published forty years ago in 1978.

Much more recently, pioneering work has looked at colonialism in popular culture in the long nineteenth century, including phenomena such as the human zoos at World’s Fairs; other approaches have seen the republication and study of writing from and about France’s colonies. The French academic establishment, meanwhile, is now opening up to postcolonial approaches, thanks in part to the pioneering publications of Jean-Marc Moura and what may be a deeper politico-cultural shift in France itself. But there remain some important divergences of approach.

Nineteenth-century French studies as a disciplinary field defines itself primarily by its object of study, although this chronological emphasis is a flexible and expanding category. In contrast, postcolonialism (unlike “francophone literature”) defines itself not as a specific corpus but as an approach informed by a body of theory and driven by a concern with politics, ethics, and the rejection of imperialism. At times, distinct ideologies appear to shape the two disciplinary fields. Postcolonial reading of French texts tends to be an act of suspicion, informed by a conception of discourse as a product and perpetuator of a Foucauldian nexus of knowledge and power. On the nineteenth-century side, critical reading often seeks to reveal a text’s formal, generic, historical, or biographical dimensions. Much work in nineteenth-century studies has derived its energy from issues of literary form and genre, which (in France itself, arguably more than in the Anglo-American academy) has at times encouraged apolitical or universalist readings. Such approaches tend to see the work of art as having unquestioned value in itself, and pay less attention to the political context of its production.

Nineteenth-century French studies as a disciplinary field defines itself primarily by its object of study, although this chronological emphasis is a flexible and expanding category.

Postcolonial criticism, on the other hand, has tended to be wary of this concentration on literary form, which is seen as part of an elitist cultural capital and associated with stifling forms of canonicity. The divergences between the two approaches have in one respect tended to increase recently, with the rise of genetic criticism in France. The study of manuscripts, facilitated by new technical means, along with the “return of the subject,” has encouraged nineteenth-century studies to look at writing as an individual, idiosyncratic process rather than as part of a broader social discourse. This focus on authors stands in marked contrast to the approach by “area” that is more common in postcolonial criticism, which, after all, derives partly from wider approaches associated with “area studies.” Spatiality is, of course, itself an area explored by scholars of the nineteenth century, but the field remains, on the whole, implicitly structured in terms of authors or periods rather than spatiality.

There are, however, productive and exciting areas of crossover between these two fields. Cross-fertilization between the study of literary texts and visual, non-literary, or popular culture artefacts is one such area, as can be seen for example in the work over the past few decades of the Association connaissance de l’histoire de l’Afrique contemporaine (ACHAC). Long-standing areas of nineteenth-century studies, such as “orientalism” or “exoticism,” are increasingly being re-contextualized in terms of colonial discourse and practice. Travel writing and colonial-era literature require approaches that account for formal traits and individual idiosyncrasies, as well as deep-seated ideological tensions. And within postcolonial theory there have been new calls for an approach that would take into account the specificity of the literary, and formal, poetic or generic aspects. These conjunctions open up a dynamic, shifting, and highly enabling intersection between, on the one hand, the study of literary form, individual subjectivities, and the metropolitan socio-historical context, and, on the other, wider political contextualization in terms of colonial history and the postcolonial globalized world.

Charles Forsdick is James Barrow Professor of French at the University of Liverpool. He is a specialist on Haiti and the Haitian Revolution, and has written widely about representations of Toussaint Louverture.

Jennifer Yee is a Professor of Literature in French at the University of Oxford. Her research interests include Balzac, Flaubert, Baudelaire, Zola, colonial and "exotic" writing, Proust, art history, and twentieth-century francophone writing.

Together, they are the authors of "Towards a Postcolonial Nineteenth Century: An Introduction" published in the latest special issue of French Studies.