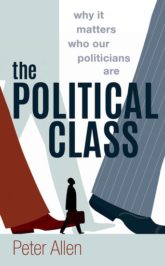 The Political Class: Why It Matters Who Our Politicians Are

Right now, the British people do not like their politicians. A common target of this dislike is not a singularly unpopular politician but rather the so-called “political class,” a group supposedly led by career politicians who collectively feed from the trough of publicly funded political institutions, who fail to represent the public at large, and who are a noxious mix of self-serving indifference. The overarching narrative surrounding the political class often takes one of three forms: attacks based on who they are (their personal characteristics), attacks based on what they do (their behaviour), or attacks based on what they think (their attitudes).

The most common element of the political class narrative focuses on the lack of characteristic diversity held by its members. This might be the reasonably vaguely specified characteristic of working in a job that relates to politics before becoming an actual Member of Parliament (MP), or the more precise one of being a politician who was educated at “Oxbridge,” for example. There is, however, a solid amount of evidence supporting the idea that the political class lacks characteristic diversity: it is overwhelmingly male and white, with just 32% of MPs being women and 8% from ethnic minority backgrounds. It is also increasingly composed of individuals who have worked in politics in a professional capacity prior to becoming MPs, the percentage of MPs with the background growing from the low single digits in 1979 to almost 20% now.

The most common element of the political class narrative focuses on the lack of characteristic diversity held by its members.

Another characteristic failing levelled at the political class is that its members are significantly wealthier than the population at large. This is somewhat harder to prove than the above, but we can look at certain proxies. We know that MPs earn significantly more than the average national wage, for example. Another proxy of overall wealth might be property ownership. On this count, figures from early 2016 suggest that around a third of all MPs let property as landlords, this compared with only 2% of Britons as a whole. Education, particularly private or independent education can also be seen as a proxy of familial wealth in the form of a privileged upbringing. Following the 2015 General Election, the Sutton Trust found that 32% of MPs had been privately educated compared to just 7% of the UK population.

Moving from characteristics to attitudes, the political class has been accused of a profusion of sins ranging from Europhilia, elitism, and London-centrism. It’s tough to say how true any of this is—there is little reliable evidence as to the content of politicians’ attitudes. Primarily, this is because it is increasingly difficult for political scientists and other interested parties to survey them in any kind of reliably representative fashion. I also suspect it is because a fair few of those who make claims regarding their content are not always as interested in backing them up with evidence as they are in making them in the first place. Some, like Colin Hay and Owen Jones, have made convincing arguments about how the political class may largely share views about the economy, specifically a belief in the superiority of free-markets over government-managed mechanisms as well as the fact that some large areas of public policy are better handled when the “politics” is taken out of them. If true, this will not only reflect the composition of the political class in terms of personal characteristics, but also shape it.

Finally, others have focused their ire on the behaviour of the political class. Suffice it to say, literally none of these critics are saying how well-behaved they think our politicians are. One theme is that the political class, far from doing things that they actually believe in, will instead do whatever it takes to climb on to the next rung of the political career ladder. The suspicion here is that if someone has set themselves the goal of holding powerful political office, they are likely to do anything necessary to make it there and, as such, they probably will not make for the kind of politician who the public claim to want—someone who will stand up for the nebulous category of “what they believe in.” Others see them as behaving in such a way that prioritises their own personal gain, while others again feel they are bearing witness to a political class that continually behaves in a strange way. Barbara Ellen, writing about politicians’ behaviour asks, “Why can’t they just look more normal?”, while others leapt on Ed Miliband’s tussle with a bacon sandwich as further evidence that members of the political class were fundamentally odd compared to most Britons and seemed doomed to continue to behave in such a way. Again, however, it is hard to say anything especially certain about this charge—the diagnosis of weird behaviour is, undoubtedly, in the eye of the beholder.

So, there is some support for the various planks of the political class narrative, especially that relating to the lack of characteristic diversity within it. Regardless, however, of the broader veracity of the narrative, its potency is hard to deny and this raises difficult questions for those seeking to counter it.

Peter Allen is Reader in Comparative Politics at the University of Bath. His research on representation, political behaviour, and gender and politics has been published in a number of academic journals. He is currently an ESRC Future Research Leader and a 2016-7 Kluge Fellow at the Library of Congress in Washington D.C. The Political Class: Why It Matters Who Our Politicians Are, published by Oxford University Press, is his first book.

How (un)representative is the British political class? [QUIZ]