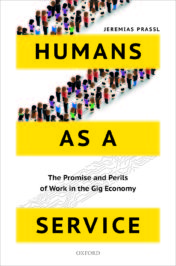 Humans as a Service: The Promise and Perils of Work in the Gig Economy

The world of work is going digital: an ever-growing number of start-ups are setting up online platforms and mobile “apps” to connect consumers, businesses, and workers—often for jobs lasting no longer than a few minutes. What started out as a small niche for digital “crowdwork” on platforms like UpWork and Amazon’s Mechanical Turk has grown into a global phenomenon. Some of the major players have quickly become household names: think “ride-sharing” companies Uber, Lyft, Didi, and Ola, delivery apps Deliveroo and Foodora, or casual task platforms Helpling and TaskRabbit.

New platforms are cropping up in industries from transportation to domestic care, from professional services to manual labour. They are at the vanguard of what is often called the “gig economy,” evoking the artist’s life in which each concert, or “gig,” is but a one-off task or transaction, without further commitments on either side. Its rise has been surrounded by intense public debate. Contradictions abound. To some, the “Uber economy” is merely the latest instantiation of runaway capitalism “screwing the workers”; to others, “collaborative consumption” is the foundation of fundamental improvements in our working lives.

Key to this business model are the powerful algorithms at the heart of platforms’ operations, designed to match consumers who need a task done with entrepreneurs in search of their next “gig.” The underlying quest is to remove as much “friction” as possible from each interaction. Beautifully designed apps with clever functionalities offer swift introductions, and make the gig economy fun and easy to use for both parties: drivers and passengers can see each other on their phones before a trip has begun; if you need help assembling new furniture, an algorithm will swiftly find the best—or cheapest—available handyperson.

This is the promise of a future of work in a digital world: clever algorithms will allow more and more of us to enjoy the thrills and rewards of life as a (micro-) entrepreneur. Instead of the tedium of 9-5 work in an office or factory under the ever-watchful eyes of a powerful boss, individuals can turn to a wide range of platforms to choose when, how, and where to work. This can be a real lifeline for groups traditionally excluded from the labour market, from homebound workers to those with criminal convictions. Anyone can easily find work through digital intermediary platforms such as Fiverr, where an online account is all that’s required to start earning money. Many stories are genuinely inspiring: the flexibility and additional income of gig work allow many to pursue their goals and fulfil long-held dreams.

Key to this business model are the powerful algorithms at the heart of platforms’ operations, designed to match consumers who need a task done with entrepreneurs in search of their next “gig.”

At the same time, however, a darker picture is also emerging: life as a “micro-entrepreneur” on many a platform is heavily conditioned by ever-watchful rating algorithms—a new “boss from hell” in the words of gig economy-critic Tom Slee. Instead of offering mere match-making services, many platform operators rely on constant algorithmic monitoring to ensure tight control over every aspect of work and service delivery. Additional elements—from compliance with platform policies to how quickly and often a worker accepts new tasks—are factored into the equation, with any deviation sanctioned in real time. Failure to comply can have drastic results—up to, and including, sudden, unexplained “deactivation.”

In many instances, algorithms will also assign work—and determine rates of pay. Depending on consumer demand, this means that the promised flexibility of on-demand work can quickly turn into economic insecurity, as gig income is highly unpredictable from week to week. The promise of freedom similarly rings hollow for many—not least because of carefully constructed contractual agreements, which ban some gig workers from taking platforms to court. Instead of enjoying the spoils of successful entrepreneurship, a significant proportion of on-demand workers find themselves trapped in precarious, low-paid work.

How should we respond? As regulators and courts around the world begin to grapple with these competing narratives of work in the gig economy, potential solutions abound: some insist that we ban the platforms in order to protect workers and consumers; others, that their development best be left alone lest innovative developments are stymied. In reality, however, neither of these extremes is likely to work: what we need instead is a level playing field on which new and existing businesses can compete. Employment law has a crucial role to play in this regard—even if the boss is an algorithm. This is not a question of enforcing burdensome rules to thwart innovation. Businesses can compete on an equal footing only if existing laws are equally applied and consistently enforced. Ensuring the full application of employment law is crucial if we want to realize the promise of the gig economy—without being exposed to its perils.

Jeremias Prassl is Associate Professor in the Faculty of Law, University of Oxford. He is the author of Humans as a Service: The Promise and Perils of Work in the Gig Economy, a new release from Oxford University Press.