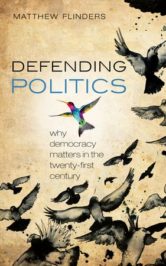 Defending Politics: Why Democracy Matters in the 21st Century

One of the great things about being on sabbatical is that you actually get a little time to hide away and do something that professors generally have very little opportunity to do – read books. As a result I have spent the last couple of months gorging myself on the scholarly fruits that have been piling-up on my desk for some time, in some cases years. I’ve read books on ‘slow scholarship’ (Berg and Seeber, 2016) and ‘How to be an academic super-hero’ (Hay, 2017); books on ‘radical approaches to political science’ (Eisfeld, 2012); brilliant books on The festival of insignificance (Kundera, 2015) and In Defence of Wonder (Tallis, 2012); and even novels on university life, such as Stoner (Williams, 2012). What fun it is to soak yourself in the literature! To swim from genre to genre, from topic to topic with a little more freedom to explore beyond your micro-specialism than is ever usually possible and, through this, to garner new insights.

That is until an argument and insight makes you stop and tread water; to question your intellectual tribe and its contribution to society; that leaves you with a sense that you may now be ‘not waving but drowning.’

To some extent Stephen Pinker’s Enlightenment Now (2018) is the literary equivalent of being hit over the head while open water swimming by the chap in the guide boat that was supposed to be looking after you.

Pinker’s position is – simply put – that ‘those angry people don’t know how lucky they are.’ His argument is as simple as it is bold: overall the world is not declining into chaos and disaster but ‘people are getting healthier, richer, safer, and freer, they are also becoming more literate, knowledgeable, and smarter….People are putting their longer, healthier, safer, freer, richer and wiser lives to good use’. There is no ‘hellish dystopia’ but a world defined by progress based upon the insights of science and the Enlightenment. Pinker offers a powerful polemic that is almost bursting with apparently unquenchable optimism. From sustenance to health, from peace to equal rights, through to quality of life and the environment, the world has never been a better place to live in. Did you know that that Americans today are 37 times less likely to be killed by lightning than in 1900, thanks to a combination of better meteorological forecasting, electrical engineering, and safety awareness? Pinker writes that his favorite sentence in the whole English language comes from Wikipedia, ‘Smallpox was an infectious disease caused by two virus variants, Variola major and Variola minor.’ The word ‘was’ is what he likes.

In a somewhat odd turn of argument Pinker focuses upon Friedrich Nietzsche as the root of all counter-enlightenment evil. And yet when reading Enlightenment Now Nietzsche’s phrase regarding ‘philosophizing with a hammer’ sprang to mind due to Pinker’s emphasis on the world as understood (and only understood) through data-driven graphs. Variations of which appear over-and-over, each one measuring an apparently indisputable measure of human progress but hitting you over the head, wearing you down, like the dull data thud of progress, pushing towards the hypothesized tipping-point when you surrender and concede defeat to the inevitability of progress past, progress present, and progress future.

The problem is, however, reconciling this vast body of data on global human progress with the rise of populism, which is in itself reflective of a large amount of social frustration and anger amongst large sections of the public who don’t ‘feel good’ but feel ‘left behind’ (Wuthnow, 2018), ‘strangers in their own land’ (Hochschild, 2016 – by far the best book I have read for years) or part of the forgotten ‘périphérique’ (Guilluy, 2015).

And yet if life is improving in relative terms for most people, why have so many people proved attracted to populist temptations? Who or what is to blame?

‘I believe that the media and intelligentsia were’ Pinker writes ‘complicit in populists’ depiction of modern Western nations as so unjust and dysfunctional that nothing short of a radical lurch could improve them.’ This intelligentsia includes the social and political sciences, and although he notes ‘It may sound quixotic to offer a defence of the Enlightenment against professors’ he proceeds to rally against the ‘dystopian rhetoric’ of academe, the cultural pessimism of professors, and even accuses them of poisoning voters against democracy. Academics are, apparently, ‘progressophobes’ who chip away at the public’s confidence in conventional politics and through this have unwittingly created a vacuum that populism has filled.

Pinker’s polemical scientism was clearly designed to enthrall and enrage in equal measure and to this extent I can simply light the touch paper by pointing the reader to John Gray’s review in the New Statesman.

I am not really that interested in Pinker’s book. It is flawed from too many angles. Moreover, the academics and cultural pessimists that he blames are generally sociologists and critical theorists such as my old friend Zygmunt Bauman and the terror of modernity himself, Slavoj Žižek. And yet I could not escape a vague sense of uneasiness; a feeling that in some oblique and indirect way there might be a link between the critique of the ‘new optimists’ and the psycho-analytic temperament of political science. Not only has the discipline’s longstanding focus upon ‘endism’, crises, and failure  been well documented, even its more quantitative approaches tend to be laden with fairly pessimistic assumptions about human nature.

I am, of course, and out of necessity, painting with such thick strokes on such a wide canvas that my argument may not tolerate stress-testing through detailed investigation, but humor me for just a little while longer and consider the titles of the leading books on democratic politics and performance in recent years.

Even the most cursory glance at the titles of the books paints a pretty bleak portrait of crisis, failure, and decline. John Kenneth Galbraith once advised that if you ever want a lucrative book contract, just propose to write The Crisis of American Democracy and it appears that there may have been some truth in this advice (at least in the minds of publishers thinking about potential sales). This is true to the extent that even when the arguments that reside within the pages of several of the books mentioned above are as balanced and measured as they are coherent and constructive, they are published under a title that resonates with ‘endism’.

Therefore if democracy is not in terminal decline the general message emanating from political science is that it is in pretty bad shape. Put slightly differently and with Pinker’s critique in mind, it is hard to find a positive vision within the discipline that sees the world’s problems against a backdrop of progress. That may well be all and good; I’m certainly no apologist for capitalism but it did at least make me stop and think….

Matthew Flinders is Professor of Politics at the University of Sheffield, President of the Political Studies Association of the UK and is a Council Member of the Economic and Social Research Council. He was until recently Specialist Adviser to the House of Lords Select Committee on Citizenship and Civic Participation and the final report of this committee can be found here. Matt will be giving the inaugural lecture at the Centre for Political Ethnography at the University of Southampton on Wednesday 13 June. He is the author of Defending Politics: Why Democracy Matters in the 21st Century.