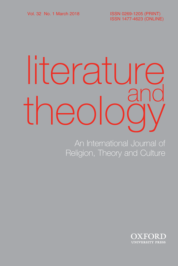 Literature and Theology, a quarterly peer-review journal, provides a critical non-confessional forum for both textual analysis and theoretical speculation, encouraging explorations of how religion is embedded in culture. The Journal's overall aim is to engage with and reshape traditional discourses within the studies of literature and religion, and their cognate fields - biblical criticism, literary criticism, philosophy, politics, culture studies, gender studies, artistic theory/practice, and contemporary critical theory/practice.

This year marks the 200th anniversary of the publication of Frankenstein, Mary Shelley’s acclaimed Gothic novel, written when she was just eighteen. The ghoulish tale of monsters—both human and inhuman—continues to captivate readers around the world, but two centuries after Shelley’s pitiably murderous monster was first brought to life, how does the tale speak to the modern age?

The answer is that the story remains strikingly relevant to a contemporary readership, through its exploration of scientific advancements and artificial intelligence.

Frankenstein has been described by many readers as the first work of science fiction. The titular Victor Frankenstein harnesses a mixture of alchemy, chemistry, and mathematics to gain an unprecedented insight into the secrets of animating sentient flesh. The green, metal-bolted creation of popular culture is a far cry from Shelley’s literary monster, whose translucent yellow skin and black lips are compared to the desiccated flesh of a mummy. The creature instantly repulses all who set eyes on him, including his creator.

Victor’s insatiable desire to complete his scientific feat are, like his creature, both captivating and repulsive. The monster is the product of his all-consuming need to gain the power of a god and conquer the laws of nature. When the process is complete, he is instantly horrified by the result of his efforts, but with the monster-genie out the bottle he cannot control the creature or prevent it from destroying all he holds dear.

The process reflects a mistrust of scientific discovery, which was commonplace in the works of the Romantics. From its beginnings, The Romantic Movement was concerned with regulating the unchecked pursuit of scientific or technological advancements via “natural philosophy,” or the sciences—a potential that was prized above all else by the Enlightenment.

Romanticism, whilst recognising the exciting potential of science, valued the importance of the natural order. In the generation who saw unprecedented technological feats, including the invention of the steam engine and indoor plumbing, this must have seemed a particularly pertinent issue to a young Shelley. The novelist conceived her literary creation in what she described as a “waking dream,” which she feverishly wrote during a summer spent holidaying with her husband in the home of Lord Byron.

The combination of her interaction with these two prominent Romantics, and the vast scientific advancements of her generation, resulted in more of a “waking nightmare.” The tale, like contemporary fears of what mechanical developments could bring, was frightening. Both Frankenstein and his monster embody the dangers of unchecked scientific discovery, and the resulting destruction is a parable for regulating these advancements.

But the monster is more than just a hideous deformity: through secretly observing human interaction, he comes to understand language, to decipher writing, and to appreciatively read the works Paradise Lost, Plutarch’s Lives, and The Sorrows of Young Werther. By the time he is reunited with his maker, he passionately and eloquently expresses his desire to be accepted by another living soul, either human or of Frankenstein’s own making.

Shelley’s novel doesn’t present scientific and technological advancements as purely monstrous. Rather, it is the callousness of the creator, who cannot or will not anticipate the dangers of their invention, who is truly monstrous. Throughout the novel, the reader is invited to bear witness to this ironic parallel.

In the modern age of IVF and genetic engineering, Frankenstein’s alchemic studies and chemical apparatus are charmingly outdated as a means of generating life. But the pursuit of technical discovery, and the dangers this poses to the natural order, finds easy parallels in modern technological advancements, particularly surrounding artificial intelligence.

The modern day is fraught with fears of the implications of machine learning—both what it can create, and what this will mean for mankind’s global future. The 20th and 21st centuries have seen a proliferation of literature on this theme, including Phillip K. Dicks’s Do Androids Dream of Electric Sheep, James Cameron’s Terminator series, and Alex Garland’s Ex Machina. All these artistic works find their roots in the themes of Shelley’s 200-year-old novel: a “monster” of mankind’s own making.

Shelley gave her novel the subheading “The modern Prometheus.” The Classical Titan, who stole fire from the gods and gifted it to man, was tortured eternally for his crimes. In a parallel fable, the prodigious Victor Frankenstein places the spark of life into a creature which he does not know how to control. The brilliance of his achievement is undeniable, but the unchecked flame eventually consumes his loved ones, himself, and even his creation. Like Prometheus, Frankenstein steals a gift from the realm of gods, which he cannot wield and is sorely punished for.

In the age of complex machine learning, Shelley’s reimagined Prometheus has never been more modern than he is today. As the lately departed Stephen Hawking stated when opening the Leverhulme Centre for the Future of Intelligence:

“Success in creating AI could be the biggest event in the history of our civilisation. But it could also be the last—unless we learn how to avoid the risks.”

Helena Nicholson is a Marketing Assistant in the Journals team at Oxford University Press.

To-Day and To-Morrow; the rediscovered series that shows how to imagine the future