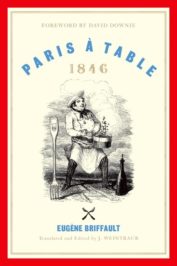 “When Paris sits down at the table, the entire world stirs….” Eugène Briffault’s Paris à Table captures the manners and customs of Parisian dining in 1845. He gives a panoramic view of the conception of a dish (as detailed as the amount of coal used in stoves) to gastronomy throughout the city—leaving no bread roll unturned as he investigates how Paris eats.

The below excerpt from Paris à Table (translated into English by J. Weintraub) provides statistics to capture the magnitude of the Parisian way of life.

What a people eats, then, is known; but nothing is known of those private customs and manners that show their true character under a picturesque and lively appearance, constantly in motion. That is what we are trying to do for Paris.

Homer’s heroes and the children of Master François’ imagination are dwarfs whose pygmy proportions cannot compare with the grandeur of our city. To feed it every day, thousands of individuals devoted to the service of its gullet voluntarily condemn themselves to continual labor. For Paris, in the year 1844, five slaughterhouses killed and carved up: 76,481 steers, 16,374 cows, 77,881 calves, 437,385 sheep, 90,000 hogs. Such is its appetite!

The small bites, pâtés, terrines, preserved meats, crawfish and lobster, delicacies that Paris eats for its pleasure as horsd’oeuvres, to add charm to its leisure and sharpen its appetite, constitute a weight of 112,000 kilograms. The local meats, small gifts that come from the surrounding area, contribute only 821,000 kilograms to its diet; sausages and cold cuts play a more important role there, Paris consuming some 3,418,000 kilograms, sufficiently warranting the burning thirst by which it is constantly tormented. There are also the extremities and the offal; these are the leftovers from the butchering that reaches just about 1,240,779 kilograms. Such are the principal elements of the animal part of its nutritional diet.

The other amenities of its table are not any less than those of which we have just spoken.

In 1845 Paris consumed more than a million hectoliters of wine; about 115 liters for each resident. This quantity is for real wine, introduced legally into Paris; but who will say how much it was extended by fraud and processing. The committee for viniculture estimates water sold for wine at 500,000 hectoliters. This is still only a probable figure.

In addition, Paris drank 119 hectoliters of beer and 14,000 liters of apple and pear cider. Alcoholic spirits contributed to its consumption 36,000 hectoliters, which include, admittedly, liqueurs and fruit brandies, perfumed waters, alcoholic varnishes, and pure alcohol in barrels. We think that four-fifths of this quantity should be allocated to consumption down the gullet.

Recalling that grapes alone account for 623,962 kilograms will give some idea of the fruit eaten here. Let us not forget to mention that every year Paris puts into its salads 18,000 hectoliters of vinegar and therefore three times as much oil.

The provinces surrounding it supply its vegetables, coming from more than two hundred kilometers all around: it enlists the entire French countryside. Provence is its greenhouse; Touraine its garden; Normandy raises and fattens its cattle; the flocks of sheep destined for its table graze in the robust meadows salted by the ocean’s waters and along the aromatic crests of the Ardennes; it fishes in three seas; like no other, it is rich in rivers, streams, lakes, and ponds; it holds within its waters the fish most in demand; in its torrents, the ponds of its mountains, it sees trout multiply; at the mouths of its rivers, it finds salmon, sturgeon, and those hybrid species, whose time in fresh water, close to the sea, endows them with such delicate flavors. Its forests and woods do not let it lack for game; those bands of riflemen, those panting hounds, those stallions and hunters surge forth for Paris; the horns sound out for Paris. It counts among its purveyors the most illustrious of names: there have been kings, and there are still princes who kill game for it.

Who will count the number of people who put something in the oven and take it out every day for Paris: cooks, grill men, bakers of pastry and bread, cupbearers, confectioners, cheese and dairymen, ice-cream makers; those who watch over the saucepans, the kitchens, the spits, the service, the ovens, the cellars and liquor cabinets, and those who preside over the fruits and buffets; who then will undertake the census for all this?

In every corner of the world, Paris has people mindful of its tastes, its fantasies, its desires, its whims; if its appetites languish, they work to revive them, they think about generating new ones in place of those that have gone away; imagination, art, and industry are united in this competitive rivalry to win the good graces of the master. Paris has thus become the only place where the magical power of gold has been applied to its fullest extent: with gold, Paris knows nothing is impossible.

Elsewhere, greater pomp and greater magnificence can be deployed; but nowhere can the exquisite delicacy of taste and elegance be satisfied as well as in Paris; Parisian comfort does not have the refinements of egoism; but it has the understanding of a life that blends the delights of the mind with the satisfactions of the sensual. This charming secret, whose tendencies are on full display and which retains the natural graciousness of its customary manners, is, for all measures of its existence, an inexhaustible source of attractions, and a privilege belonging to Paris alone; it is envied, it is copied; but it cannot be stolen away.

At the table is where Paris loves to assemble those riches that shape its pride and its happiness.

Eugène Briffault (1799-1854) was an editor, journalist, theater critic, and man of letters. As a chronicler of contemporary Paris, he contributed to many anthologies and periodicals of his day and was an acquaintance of many of the important literary figures of the time. He is the author of Paris à Table.

J. Weintraub is a writer, dramatist, poet, and translator based in Chicago. He holds a PhD in English Literature from the University of Chicago. He provides English translation for Paris à Table.