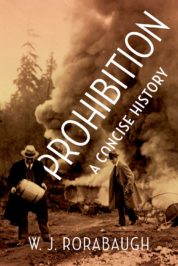 The Eighteenth Amendment to the US Constitution banned alcohol from 1920 to 1933. Sometimes called the “noble experiment,” this disastrous public policy reduced tax revenues, made gangsters rich, and failed to stop drinking. Alcohol consumption did drop some, but regular drinkers turned to bootleg liquor and moonshine, some of which was deadly. In the following interview the historian W. J. Rorabaugh discusses prohibition and its discontents.

Q: What was Prohibition, and when did it take place?

A: During the 1920s the Eighteenth Amendment to the US Constitution banned the production and sale of alcohol in the United States.

Q: How long did Prohibition last?

A: Prohibition lasted only thirteen years. The Twenty-First Amendment repealed Prohibition in December 1933.

Q: If the United States had long been a hard-drinking country, how did the dry minority achieve Prohibition?

A: The dry forces had superior political organizations. The Woman’s Christian Temperance Union (WCTU) had been campaigning for a dry country since 1874, and in 1895 it was joined by the Anti-Saloon League (ASL). The nation’s first single-issue political action group, the ASL spent lavishly to elect dry legislators and members of Congress. Whenever they had a majority in a state legislature, they moved to dry out that state. In 1913 they started lobbying for a dry amendment to the US Constitution.

Q:  How did the Republicans and Democrats respond to the ASL’s demands?

A: Both parties were terrified of the ASL, which moved aggressively to defeat any candidate that did not agree to its demands. The ASL spent lavishly on campaigns, provided its candidates with speech writers and advertising, and organized an army of dry volunteers through evangelical churches.

Q: How did wet candidates confront these tactics?

A: Many wet candidates took money from the German-American Alliance, an official group founded in 1900 by the German government to foster better German-American relations and promote German culture in America. In the early 1900s one-quarter of Americans were of German ancestry. The Alliance had two million members.

Q: What was the problem with Alliance money?

A: While some people objected to the Alliance because it was an official German-government sponsored organization, the greater problem was that the money came from American brewers, who were mostly of German ancestry. The brewers kept their role hidden by giving money secretly to the Alliance, which then openly backed wet candidates.

Q: How did the First World War affect the situation with the German-American Alliance?

Q: How did 1916 prove to be pivotal for the Prohibition movement?

A: First, the press disclosed how brewers had funneled money through the Alliance. Second, the press showed that the Alliance had been secretly promoting the German war effort inside the United States since 1914. Finally, when the fall 1916 elections were held, almost no wet candidates could compete. They could not take money from any brewers or the many saloons that the brewers controlled. Dry candidates backed by the Anti-Saloon League won in droves, and the new Congress had more than two-thirds majorities favoring a dry constitutional amendment in both the House and Senate.

Q: When was the Eighteenth Amendment enacted?

A: Congress passed the amendment in 1917 after the United States entered the First World War. Prohibitionists argued that while soldiers sacrificed their bodies abroad, civilians needed to sacrifice drinks at home.

A: Due to the war, it was very popular. Thirty-six states ratified the amendment by January 1919, and it went into effect one year later. The delay was to give the alcohol industry time to adjust by selling off stock and entering new businesses.

Q: Was Prohibition a success?

A: No, it was a disaster. Many Americans continued to drink. The liquor that was sold was often adulterated and could be deadly. Mobsters gained control of the lucrative illegal alcohol industry. They corrupted politicians and police, and they fought a lot of violent gang wars. At the same time, the gangsters got rich and paid no income tax.

Q: Why was Prohibition eventually repealed in 1933?

A: The Great Depression tipped the balance. Bad liquor, corruption, and mob violence were problems, but the depression caused all governments to suffer tremendous declines in revenues. Repeal enabled cities, states, and the federal government to use high alcohol taxes to help their starved budgets. Alcohol also became much more closely regulated after Prohibition was repealed.

Q: What do Americans today think about Prohibition?

A: Americans today recoil at Prohibition because most of the stories that they have heard are overwhelmingly negative. It is hard to convey the sincerity and moral fervor that drove dry advocates to push for the Eighteenth Amendment. Many reformers truly believed that no one would dare violate the Constitution, and the country would be forever dry.

W. J. Rorabaugh is Dio Richardson Professor of History at the University of Washington. He is the author of six books, including The Alcoholic Republic, American Hippies and Prohibition: A Concise History.