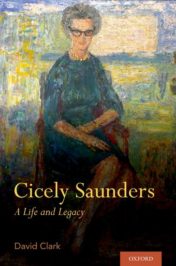 Cicely Saunders: A Life and Legacy

Dame Cicely Saunders (1918-2005) was a physician and the founder of the modern hospice movement. Her initial early work in hospitals and hospices established her determination to start her own home for the dying, and in 1959 she founded St. Christopher’s hospice.

The edited extract below, taken from the upcoming biography Cicely Saunders: A Life and Legacy, details Cicely’s first two years at the Society for Homes Students (St. Anne’s College) at Oxford University and the effect the start of World War Two had upon her studies.

She arrived in 1938, at age twenty-one, for the Michaelmas term. In that year, there were 850 women studying at the University, making up a record 18.5% of the student body. Cicely elected to read Politics, Philosophy, and Economics (P.P.E.). This programme of study had been established at Oxford in the 1920s as an alternative to ‘Greats’ or Classics. It was generally known as ‘Modern Greats’. Oxford defined the degree as being ‘the study of the structure, and the philosophical and economic principles, of Modern Society’. Cicely was therefore in the vanguard of a new interest in social science which was entering British academic life.

At the time, Cicely had the idea of being ‘a secretary to a politician or something like that’. This was a gendered assumption which reflected the period and the context. Although women made up almost a fifth of the undergraduate body at this point, they continued to be heavily discriminated against. Yet, Oxford had already seen some remarkable female graduates, including Gertrude Bell, Vera Brittain, Winifred Holtby, and Dorothy L. Sayers. The name of Cicely Saunders would eventually be added to that list. Notwithstanding, in 1938 the Oxford Union again voted to deny women access to full debating rights. Until 1934, women students studying medicine had to make use of their own anatomy laboratory. Oxford’s conservatism and privilege would have been at once familiar to the undergraduate Cicely; but, the intellectual and moral foment, the daily engagement with world politics, and the constant discussion at meals about the prospects of war, were new and enervating.

On 29 September 1938, days before Cicely arrived among the ‘dreaming spires’, the British Prime Minister Neville Chamberlain had signed the Munich Agreement, handing over the Sudetenland to German control. Her first term at University therefore had as its signature theme the growing spectre of war.

With turmoil all around, Cicely applied herself to her pass moderations. These were the first set of examinations at Oxford and would determine her onward progression to Modern Greats. Her year was enjoyable. She settled to her work but also joined the Bach Choir, did Scottish Country Dancing, and made some friends. At the end of the year the results were sound and allowed her to continue. The detailed focus on the core elements of P.P.E. was about to begin.

On 3 September 1939, Neville Chamberlain announced that Britain was at war with Germany. The assurances of Munich had fallen apart. Oxford students flocked to volunteer for officer training — despite the controversial debate of 9 February 1933, condemned by Churchill, when the Oxford Union had carried the motion ‘This House would not in any circumstances fight for King and Country’. Now a new patriotism was emerging, less jingoistic than in the Great War, and heavily focussed on the scourge of fascism. In due course, the exodus of undergraduates to the war would be matched by an influx of evacuees from London and elsewhere.

During her second year at Oxford, Cicely watched these events unfold for just one more academic term before resolving to leave and get involved in the war effort. The decision seems to have been finalised towards the end of 1939, and it took her tutors and her family by surprise. An article she had written for the Roedean School Magazine, published in December 1939, gives only the mildest hint of it. This elegantly written piece, seemingly composed in the months of autumn, begins by referring to the outbreak of war and ‘the first unthinking moment, when a large proportion of the female population of England said “I shall give up everything, and either nurse, or drive enormous army lorries”’ but after which ‘most of us resigned ourselves to a thoroughly dim term, with nothing and nobody the same as before’. In the main, Cicely strikes a tone of normality. Lectures continue, the daily routine remains unchanged, and the city looks ‘much the same as usual’, apart for the sandbagged windows and bright orange signs denoting the air- raid shelters. She majors on the continuities:

‘Christ Church Meadow, where the leaves are turning; the group of spires and towers across Merton fields; the river by Port Meadow; and the three college Chapels, where choral evensong is sung every day, Magdalen dimly lit by rows of tall candles placed along the pews’.

But she explains that most of the women students had taken up war- related interests — attending Red Cross lectures, organising sewing and knitting groups, helping with evacuees, and doing part- time ambulance work. Yet the article makes clear these remain secondary to the main purpose of being in Oxford: ‘working for as a good a degree as possible, in the hope that nothing will happen to interrupt this’. Indeed, continuing with the life of Oxford she regarded as ‘a National Service of the greatest value’. These words may have been written to placate her teachers at her old school and also to reassure her parents that she was not about to make any rash decisions. They may also have been an exercise in self- deception, knowing all the while that her intentions were the reverse. For whilst they seem deeply felt, they were not enduring. Even by the time they appeared in print, Cicely had made the decision to foreshorten her Oxford studies, to leave the University, and to apply for training as a nurse.

Featured image credit: ‘Radcliffe Camera and All Souls College’ by Tejvan Pettinger. CC BY 2.0 via Flickr.

Professor David Clark is a Wellcome Trust Investigator at the University of Glasgow. He founded the International Observatory on End of Life Care at Lancaster University in 2003 and has wide ranging interests in the history and global development of palliative care. He is the author of the upcoming biography Cicely Saunders: A Life and Legacy publishing in June 2018 (OUP), as well To Comfort Always: A History of Palliative Medicine Since the Nineteenth Century (OUP, 2016).

Throughout the month of March, Oxford University Press will be celebrating women in STM, sharing content about the remarkable women who have shaped these industries, and what it’s like to pursue careers in these fields.