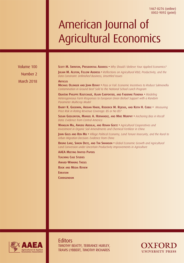 Twenty years ago, if you wanted internet access in many rural areas of America, you had to plug your computer into a phone line, listen to the dialing sound, and hope for the best. Today many people can easily join the cyber world at reliable speeds that few imagined decades ago. The internet has become a gateway to consumption opportunities and information that boggles the mind. It has transformed how businesses operate in both rural and urban areas. Although the percentage of people with broadband has increased, many in rural communities still lack broadband access and the accompanying benefits.

The US government adopted policies to address this issue with the goal of establishing universal access by 2020. The USDA Rural Utilities Service and FCC Universal Service Fund subsidize rural access by providing resources for upfront capital and operating costs respectively. Proponents argue that better broadband access will improve economic growth in rural areas by lowering production costs and increasing the size of the market for the sale of goods. Transaction costs will fall allowing rural business to better reach customers. Similarly, employers will have a better chance of finding employees who have the skills they want, and employees will more likely find firms that offer the compensation packages they desire. Consumers will face lower costs due to increased competition that raises their real income. Economic growth from broadband access offers numerous other benefits such as telemedicine, on-line educational opportunities, and more social capital from increased community interaction.

By improving the access to the internet, economic growth in rural areas would reduce the gap with the more affluent urban areas. In general populous, urban areas tend to have higher incomes than sparsely populated rural areas. Regional inequalities pervade the US, and public policies that address it have risen in importance in recent years. Expanding broadband access offers a potential way to reduce these inequalities.

Broadband access might not provide the substantial benefits policy-makers anticipated. Increased competition from online competitors may adversely affect local businesses. Consider the case of Etsy. It provides a global platform for small artisans to sell their products across the country. These include all kinds of products used for home decoration. On the one hand the consumer benefits from the increased variety. But local producers may suffer from the increased competition. An online retailer may better satisfy consumer wants and needs and put the local firm out of business.

Although the percentage of people with broadband has increased, many in rural communities still lack broadband access and the accompanying benefits.

Another problem is that the benefits tend to accrue to those rural areas closest to urban areas. Extending broadband from the city to country yields benefits to those rural areas closest to the city because critical business transaction decisions still require face-to-face interactions. The diffusion of new technologies and information is facilitated with face-to-face interactions as well. Broadband may help coordinate meetings and increase face-to-face communication of businesses and workers between urban areas and adjacent rural areas. These benefits may be smaller for remote rural areas due to physical distance. Information technologies increase labor productivity of educated workers more than less educated workers. Since urban areas tend to have larger clusters of educated workers, these labor productivity gains from broadband may be smaller in remote rural areas.

With all the pros and cons, broadband advantages in rural areas might be more impactful for those close to urban or metro markets because of the benefits that arise from more frequent interactions, enhanced information, and the larger population of skilled workers. While broadband access does not necessarily mean that the total number of new firms in rural areas would grow, our results are consistent with the view that government broadband deployment projects in rural areas will increase the likelihood of firm entry in these areas. The smallest and most remote rural towns will get the smallest economic benefits from government broadband deployment projects compared to larger rural counties closer to metropolitan areas.

Younjun Kim is an assistant professor of economics at Southern Connecticut State University. Kim has had his worked published in multiple journals, including the American Journal of Agricultural Economics, and the Annual Review of Resource Economics.

Peter F. Orazem is a professor of Economics at Iowa State University. Specializing in Human Resources Management, Growth and Development, Labor Economics, and Regional Economics, he has been published in several respected journals.

They are the authors of the article Broadband Internet and New Firm Location Decisions in Rural Areas published in The American Journal of Agricultural Economics.