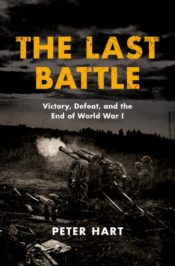 The Last Battle: Victory, Defeat, and the End of World War I

“I remember someone saying before the war that he imagined that when troops were in action under fire, each man thought to himself that whoever else might be hit, he himself would be alright. Well I don’t think this is correct—at any rate not in this war. I think men fully expect to be hit or killed, but carry on just the same. Personally, I was always thinking I was going to get hit or killed and was often surprised when I found I wasn’t.”
—Captain Henry Owens, 57th Field Ambulance, Royal Army Medical Corps, 57th Brigade, 19th Division

On the eleventh hour of the eleventh day of the eleventh month of 1918, the Great War came to an end. Conventional accounts of the war often allow these closing battles to be overshadowed by opening moves and earlier battles. However, the human costs behind the Allied victory cannot be truly understood without examining the summer of 1918.

Using personal accounts featured in The Last Battle, the timeline below captures the final battles of World War I through the eyes of the men fighting them.

Peter Hart is Oral Historian of the Imperial War Museum. He is the author of Gallipoli, The Great War, Fire and Movement, and The Last Battle, all published by Oxford University Press.

Marissa Lynch is a marketing assistant at Oxford University Press.