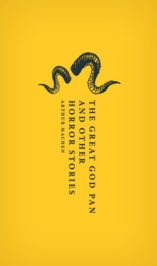 The Great God Pan and Other Horror Stories

Of the challenges Arthur Machen presents to an editor, two, in particular, have shadowed me during the preparation of this new collection of his stories. The first is simply the special sense of responsibility one feels when curating the work of a deeply loved writer—for even when Machen’s reputation has been at low ebb (as, often enough, it has been), he has always had a hard core of devoted admirers. A questionable editorial choice in a new collection of John Stuart Mill’s writings might earn one a critical review in an academic journal. But in leaving, say, the novella A Fragment of Life out of a Machen collection, one feels sure that one has made, somewhere, a secret and implacable enemy. And one cannot, alas, include everything.

This leads to the second difficulty, namely the fact that there cannot be, I believe, a truly “representative” edition of Machen, at least within a single volume of reasonable size. A “best of” Edgar Allan Poe, one feels, could be assembled by a well-trained monkey (orangutan, I suppose I should say, in the case of Poe). It will be built upon a foundation of most—if not all—of a set of perhaps a dozen tales, including; “The Fall of the House of Usher,” “The Pit and the Pendulum,” “The Cask of Amontillado,” “The Tell-Tale Heart,” “The Black Cat,” and so on; certainly, to include none of these would indicate a perverse degree of editorial idiosyncrasy, if not incompetence. But just look at the half-dozen or so “best of“ collections of Machen which have appeared in the seven decades since shortly before his death in 1947. Each volume has its merits; no two are alike. Some, indeed, are as unalike as chalk and cheese, including the two different Penguin editions which bookend the period of which I speak (the 1946 collection Holy Terrors and the 2011 “Classics” volume, The White People and Other Weird Stories). These have only a pair of selections in common, the Great War tale “The Soldiers’ Rest” and the Grail story “The Great Return”; neither contains “The Great God Pan”, considered by many to be Machen’s finest work. And while there are certainly wonderful things in the comprehensive-sounding Collected Arthur Machen (Duckworth, 1988), including Machen’s autobiography Far Off Things complete, there are almost no horror stories at all.

Such an apparently egregious lack of consensus points, above all, to the co-existence of two Arthur Machens. There is the weaver of nightmares, whose fin-de-siècle “shockers” terrified Conan Doyle and inspired H. P. Lovecraft, and there is the seeker after the numinous and the sacred, whose “The Secret Glory” changed the course of John Betjeman’s inner life. For this reason, critics of Machen have long been in the habit of dividing up his stories into two categories, which they have variously labeled “infernal and supernal,” “satanic and celestial,” “macabre and mystical,” “diabolic and divine.” His fiction has been parsed into tales of “sorcery and sanctity”, and into “pièces noires” and “pièces roses.” (D. P. M. Michael, in his 1971 contribution to the Writers of Wales series, actually produced a tally: “Analysis of some fifty stories reveals approximately thirty of black and twenty of white magic.”).

Like most divisions of this kind, this one should not be taken too far: terror and wonder are often intermingled in Machen’s work. There is soul-ravishing beauty in the disconcerting “N,” nightmare as well as transcendence in “The Hill of Dreams”. (Machen himself links “sorcery” with “sanctity” in “The White People,”: “these are the only realities. Each is an ecstasy, a withdrawal from the common life.”) But it has seemed reasonable to me to be guided by some such distinction in preparing this volume. My ambition has been to assemble, in a critical edition, as full and varied a selection as practicable of Machen’s celebrated “pièces noires”—of those tales both of visceral horror and of creeping dread which make him, in Brian Stableford’s words, “the first British writer of authentically modern horror stories.” The nineteen tales included here span a writing career of nearly half a century—a lifetime. The first, “The Lost Club”, appeared two years after the Ripper murders, and the last, “Ritual”, two years before Hitler’s invasion of Poland. (Both stories, I realize belatedly, begin with a gentleman strolling up Piccadilly.) In between the two, the reader will find Machen’s weird tales of occult science gone amok (“Pan” as well as “The Inmost Light”), his complete novel The Three Impostors (usually cut up and harvested for individual episodes), and his stories exploring the dark side of Celtic fairy lore (“The Shining Pyramid”, “The Red Hand”, and “The White People”). Here, too, are lesser-known prose poems of haunting beauty, as well as a selection of Machen’s late tales, less graphically horrific, perhaps, than “Pan” and his other productions of the Yellow Nineties, but no less memorable.

If it is any consolation to partisans of the “other Machen,” I do sometimes find myself haunted by the spectre of this collection’s uncanny double, an imaginary companion volume made up of his “pièces roses.” But surely all lovers of Machen will share my delight that, in becoming a “classic,” the  flower-tunicked priest of nightmare will find many new readers—even if that delight is tinged (just a little) with envy for those discovering his fiction for the first time.

A version of this article originally appeared on Wales Art Review.

Aaron Worth is Associate Professor of Rhetoric at Boston University, having previously taught courses in English and American literature at Brandeis University. His book Imperial Media: Colonial and Information Systems in the British Literary Imagination, 1857-1918 was published by Ohio State UP in 2014 (reviewed in TLS and widely in scholarly journals; paperback edition in 2016). He has published essays on Victorian literature and culture in leading journals including Victorian Studies, Victorian Literature and Culture, and Victorian Poetry, as well as original horror fiction in magazines including Cemetery Dance and Aliterate. Worth is the author of the entry on Horror Fiction in the recent Blackwell's Encyclopedia of Victorian Literature (2015).