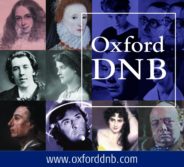 The Oxford Dictionary of National Biography is the national record of men and women who have shaped British history and culture, worldwide, from the Romans to the 21st century, and the American National Biography details significant, influential or notorious figures from American history, reflecting the rich diversity of American life from pre-colonial times to the present day.

Achievements, contributions, and developments made by women have often gone overlooked or unacknowledged throughout world history. In 1909, “National Women’s Day” was held on 28 February in New York, which was amended to “International Women’s Day” two years later. President Jimmy Carter issued a proclamation declaring the week of 8 March, 1980, as National Women’s History Week. Congress then designated the entire month of March as Women’s History Month in 1987, to raise awareness and empower women by celebrating those who have shaped society and history worldwide.

Below is a list of eight women who have each made enormous contributions to world history. It is a list that could go on indefinitely, and one that we hope opens up discussions on the incredible women that have helped pave the way for us all.

Laura Knowles is a Marketing Executive with the Global Online Products team at Oxford University Press. This article features content from across Oxford's online reference platforms, including American National Biography Online, the Oxford Dictionary of National Biography, and Oxford Reference.