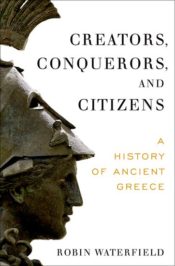 Creators, Conquerors, and Citizens: A History of Ancient Greece

Ancient Greek history is conventionally broken down into three periods: Archaic, Classical, and Hellenistic. However, the language used to describe them highlights an oversight made by generations of historians. By dubbing one period of history as “Classical,” scholars imply that the other two periods are inferior, simplifying the Archaic age as a mere precursor to, and the Hellenistic age as a lesser descendant of the Classical age.

Independent scholar and translator Robin Waterfield argues that each of these three periods should be given equal weight within the study of Ancient Greece. The following extract from Creators, Conquerors, and Citizens introduce the key components of each period.

The two and a half centuries that make up the Archaic period, roughly 750 to 480 BCE, saw the lives of the Greeks change fundamentally. Above all, there was the gradual development of statehood and civilized life, from primitive and hierarchical beginnings to far greater collectivism, equality under the law, and general participation in public life. From a broad perspective, this was an astonishing development. For hundreds, if not thou­sands of years, the chief form of political and social organization in the Near East and Mediterranean had been the hierarchically organized kingdom. Yet the Greeks evolved a different form, which became dominant in the Mediterranean world for several centuries. Politically, it was more egalitar­ian; economically, property belonged to private individuals, not just the king or a temple.

Within the Archaic period also, the art of writing, lost since the col­lapse of the Mycenaean palaces, was reintroduced. Creative geniuses such as Homer, Hesiod, the lyric poets, and the Presocratic natural scientists showed what could be done with words and ideas. Brilliant experimentation gov­erned the changing styles of vase painting; Greek art was valued all over the Mediterranean. Temple architecture evolved from modest to monumen­tal, and sanctuaries were filled with often strikingly impressive buildings and beautiful artifacts. Coined money spread rapidly. New forms of warfare were developed. The Greeks founded cities and trading posts all over the Mediterranean, impelled by the quest for wealth, or at least for relief from poverty, and supported by the god Apollo’s oracle at Delphi, which became the hub for many networks in the Mediterranean. The institutions, artifacts, and practices that define the better-known Classical period have their roots in the Archaic period.

The Classical period is bracketed by two world-changing inva­sions: the Persian invasions of Greece and Alexander the Great’s invasion of Asia— the latter presented as retaliation for the former. Alexander’s invasion brought the Achaemenid Empire to an end and the constant possibility of Persian intervention in Greek affairs. Immediately following the Persian Wars, it still might have been possible for the Greeks to unify in the face of the threat from the East, but that did not happen. An account of Greek his­tory in the fifth and fourth centuries is bound to read at times like a litany of inter-Greek warfare. Orators spouted pan-Hellenic sentiments, but the ideals were not deeply enough rooted to overcome the ancient particu­larism of the Greeks; pan-Hellenism was propaganda rather than practical politics. It is ironic that Athens and Sparta, the two states that were chiefly responsible for repelling the Persians, were also principally to blame for keeping the Greek states disunited and weak, and therefore vulnerable, ulti­mately, to a second invasion by the Macedonians. The mainland Greeks had avoided becoming part of the Persian Empire, but in 338 they fell instead under what would become the Macedonian Empire.

The Hellenistic period, and independent Greek or Greco-Macedonian history, ended in the year 30 with the fall to Rome of the final successor kingdom, that of the Ptolemies in Egypt. It is said that when Octavian, the future Roman emperor Augustus, entered the Egyptian capital, Alexandria, he honored the tomb of Alexander the Great with offerings of a golden crown and flowers. When he was asked if he would like to see the tombs of the Ptolemies as well, he refused, saying that “he wanted to see a king, not corpses.” The new ruler of the world was extravagantly honoring the first ruler of the world, but he did have a point. There was a sense in which Alexander had stayed alive, while others died. The Greeks of the Hellenistic period continued to live in Alexander’s shadow. It was his ambitions that had laid the foundations of the new world, and his spirit lingered in its con­stant and frequently brilliant search for new horizons.

Augustus’ contempt had a long history, however. Until recently, it was not uncommon for accounts of ancient history to skip from Alexander’s death to the rise of Rome, ignoring the decades in between as though nothing important happened: men turned into mere corpses, but did not bestride the world the way a true king does. This attitude is misplaced. As a result of Alexander’s conquests, Greeks and Macedonians came to rule and inhabit huge new territories. They were living, in effect, in a new world, and this made the Hellenistic period one of the most thrilling periods of history, as everyone at every level of society, from potentates to peasants, adjusted to their new situations. The period pulsates with fresh energy and with a sense— reminiscent of the excitement of the Archaic period— that anything was possible, that there were further boundaries, cultural as well as geo­graphical, to discover and overcome.

Featured image credit: “The Triumph of Aemilius Paulus” provided by The Metropolitan Museum of Art by Carle Vernet. Public domain via Wikimedia Commons.

Robin Waterfield is an independent scholar and translator, living in southern Greece. In addition to more than twenty-five translations of works of Greek literature, he is the author of numerous books, including Dividing the Spoils, Taken at the Flood, and Creators, Conquerors, and Citizens.