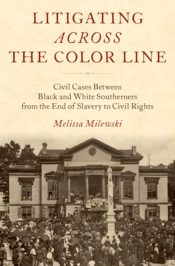 Litigating Across the Color Line: Civil Cases Between Black and White Southerners from the End of Slavery to Civil Rights

In 1868 North Carolina, Henry Buie’s former master sought to take his mule away from him. Two states away, in 1870, the white owner of the land farmed by Georgia sharecropper Moses Summerlin tried to only pay him half the amount he was owed, and threatened to kill Summerlin if he pressed the matter. In 1907, Lurena Roebuck was deceived by a local white saloonkeeper who told her a deed transferred 20 acres of her Alabama land although it actually gave him possession of her full 80 acres. Three years later, in Kentucky, Rebecca Sallee fell into a large open hole that had been left on the street as she made her way to a church service. In 1926, the city of Atlanta passed an ordinance limiting the hours black-owned barbershops could operate and whose hair they could cut, damaging the profitability of Alonzo Herndon’s barbershop business. Finally, in 1944, in Virginia, a pregnant black woman named Ethel New was ordered to give up her seat on a bus and when she refused, was forcibly carried off the bus, leading to a miscarriage.

In response, all of these black men and women—and almost one thousand others across the US South between 1865 and 1950—litigated civil cases against white southerners. They would win the majority of these cases that eventually reached eight southern states’ highest courts. In the end, Henry Buie got his mule back, Moses Summerlin was paid for his crop, the transfer of Lurena Roebuck’s land was canceled, Rebecca Sallee was paid by the city for the loss of income she had incurred, and the city of Atlanta’s ordinance was invalidated. Of these cases, only Ethel New would fail to win her case.

Black southerners received vast injustice in criminal courts during this time. They had almost completely lost the vote by the beginning of the 20th century, and experienced widespread segregation. Southern courts, in turn, were dominated by white judges and white lawyers and had largely white juries by the turn of the century. Black litigants only won these cases against whites by negotiating a legal system in which those in power often had very different interests and perspectives than their own.

To accomplish this difficult task, successful black litigants used a range of strategies. First, they often sought to align their suits with white members of the community. In cases against whites that reached southern state supreme courts, for example, they almost always used white lawyers in their litigation. These white lawyers were often motivated to take on African Americans’ cases when the suit’s success would bring them a large fee. At other times, notions of professionalism, ideas of paternalism, personal connections, and (in a small number of cases) ideological sympathies influenced lawyers’ decisions to take on suits as well. Black litigants also highlighted their connections with local whites in their testimony, at times drawing on longstanding interactions with whites whom they had known for decades. Additionally, in most of the civil cases between white and black southerners that reached their state’s highest court, white witnesses from the community testified on the black litigants’ behalf, as well as against them.

Black litigants also frequently shaped their testimony to appeal to the white judges and juries who would be deciding their suits. At times, black litigants drew on their knowledge of the relevant law—often gained from coaching by lawyers or from past experience with the courts—to shape their testimony. Like many other black litigants in fraud cases, Lurena Roebuck emphasized her lack of business understanding. This aided her legal claim as establishing unequal knowledge between the two parties was a key part of showing fraud had taken place.

Even if they had no understanding of the relevant law, most black litigants drew on their knowledge of southern race relations to shape how they presented themselves in their testimony. Some presented themselves as loyal to whites in the community, others emphasized their hardworking nature, and still others testified about their trust of whites. Even as they shaped their suits in these ways, however, black litigants also frequently asserted their legal and economic rights. At times, their suits even challenged whites’ violence. By discussing the white landowner’s threat of violence in his testimony, for example, Moses Summerlin boldly contested the use of violence to uphold white supremacy.

Even as they worked with their lawyers to shape their suits in pragmatic ways, black litigants still encountered many limitations. Whereas white southerners litigated a wide range of cases against each other, black litigants were most successful in litigating certain kinds of cases against whites, and the kinds of cases that they could litigate shifted over time as society changed. In addition, the types of cases that they had the most success in were often suits that would only impact the litigants’ families, and did not have wider societal impact. Rebecca Sallee’s successful suit after being injured in an open hole only sought recompense for her own injury. Ethel New’s personal injury suit, on the other hand, challenged segregation on interstate buses as well as asking for damages for her miscarriage and injury—and was ultimately unsuccessful. Moreover, to win a case against a white person in a southern courtroom they generally had to work with white lawyers and appeal to white judges and white juries, limiting the kinds of arguments they could make and the cases they could litigate.

But the very fact that these black litigants were able to negotiate the southern court system at all, after being shut out of other branches of government, is extraordinary. Whites’ general view of this litigation as unthreatening and the structure of the legal system often contributed to black southerners’ continuing ability to access the courts in certain kinds of cases. Undoubtedly, though, black litigants’ own pragmatic choices as they negotiated the legal system played a critical part in the economic victories they won for themselves and their families in southern courts during the 85 years after the Civil War.

Melissa Milewski is a lecturer in History and American Studies at the University of Sussex in England. Her work examines race and the law in US History. Her book, Litigating Across the Color Line: Civil Cases Between Black and White Southerners from the End of Slavery to Civil Rights, was published by Oxford University Press.