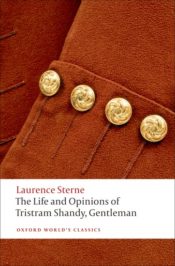 The Life and Opinions of Tristram Shandy, Gentleman

Tragedy provokes sorrow and concludes with downfall and death. Comedy elicits laughter and ends happily. Laurence Sterne’s Tristram Shandy is one of the funniest novels of world literature. But does the work, overshadowed by death, end happily? Can death and comedy mix? “Everybody dies. If you are going to take that badly, you’re doing it wrong. So you have to take it as a joke.” The sentiments of the celebrated Spanish cartoonist Antonio Fraguas, Forges, who died on 22 February 2018, might echo those of Sterne, whose own death took place 250 years ago on 18 March 1768.

The Life and Opinions of Tristram Shandy, Gentleman (1759-67), is a rare comic novel that doesn’t shy away from death. Contemporaries recognized Parson Yorick, the novel’s benign country clergyman, as a fictionalized version of the Reverend Laurence Sterne himself. In Tristram Shandy, Yorick—who takes his name from the dead jester in Shakespeare’s most famous tragedy Hamlet—dies before the midway point of the first of Sterne’s nine volumes. His death is marked by Hamlet’s familiar words, “Alas, poor Yorick!” inscribed on a marble slab—and a black leaf that speaks eloquently of the mystery of what lies beyond the grave.

Yorick himself was resurrected. Enjoying the fame Tristram Shandy brought him, Sterne performed the role of the good-natured parson in London society—at least when he wasn’t “Shandying” it (as he often was). And Yorick survived his earlier demise to become the central figure of A Sentimental Journey through France and Italy, published on 27 February 1768, less than three weeks before Sterne’s death.

Classical literature kept tragedy and comedy well apart. In sixteenth-century Italy, Giraldi Cinthio introduced the idea of la tragedia di lieto fine or tragicomedy. Yet, however subdued their conclusions, tragi-comedies end well. In the eighteenth century, by contrast, Henry Fielding thought comedy and death should keep their distance. So, he asked, in the preface to Joseph Andrews: “What could exceed the absurdity of an author, who should write the Comedy of Nero, with the merry Incident of ripping up his Mother’s Belly?”

The eighteenth century wasn’t short on savage humour. Is there anything in English to equal Swift’s A Modest Proposal in this regard? Still, funny as that work is, in parts, it is hard to think of Swift’s saeva indignatio as comic fiction—even if the French surrealist André Breton used it to open his Anthologie de l’humour noir.

Sterne, however, plays with death throughout Tristram Shandy. After Yorick, we hear of the death of Tristram’s brother Bobby, his mother Elizabeth, and even the much-loved Uncle Toby. The Story of Le Fever is an extended and much admired sentimental rendering of the gallant soldier’s dying.

The novel’s comic play with death is, however, anything but cynical—for Sterne himself had long suffered from pulmonary tuberculosis. In the first chapter of Volume VII, Death comes to call. The consumptive Tristram—another self-representation of the author—is buoyed up by his animal spirits:

DEATH himself knocked at my door————ye bad him come again; and in so gay a tone of careless indifference did ye do it, that he doubted of his commission————

“There must certainly be some mistake in this matter,” quoth he.

Tristram intends to lead Death a dance, galloping, “without looking once behind me to the banks of the Garonne; and and if I hear him clattering at my heels————I’ll scamper away to mount Vesuvius … “(TS, VII, i). Sterne determined likewise, travelling rapidly south to the warmth of Naples. It was to little avail and the correspondence of his final years is punctuated by references to the inexorable progress of his illness.

Sterne’s response was to confront death by laughing at it, writing defiantly: “I brave evils et quand Je serai mort, on mettra mon nom dans le liste de ces Heros, qui sont Morts en plaisantant; [and when I am dead, my name will be placed in the list of those heroes who died in a jest].” His words recalled an allusion in Tristram Shandy to the Emperor Vespasian whose final words, Suetonius wrote, were: “If I am not mistaken I am going to be a god.”

Where else in fiction do we find so dogged a pursuit of comedy in the face of death? Kurt Vonnegut’s Slaughterhouse-Five is often very funny but the firebombing of Dresden—which the author experienced as a prisoner-of-war—has not persuaded many readers to consider it comic fiction. Terry Pratchett’s Mort, José Saramago’s As Intermitências da Morte, or George Saunders’s Lincoln in the Bardo might suggest themselves but for most readers any list of comic novels about death is likely to be short.

Perhaps only Joseph Heller’s Catch-22 matches Tristram Shandy in suggesting fiction might be comic and deadly serious at the same time. As we eventually learn, Yossarian’s anguish results from his discovery of Snowden’s secret—around which the narrative circles obsessively—that “man [is] matter.” Sterne’s novel is always funny, its seriousness only occasionally overt:

Time wastes too fast, and every letter I trace tells me with what rapidity Life follows my pen; the days and hours of it, more precious, my dear Jenny! than the rubies about thy neck, are flying over our heads like light clouds of a windy day, never to return more————every thing presses on …

Yet true to the facetious tendencies that enliven Sterne’s writing, the following chapter is memorably short:

NOW, for what the world thinks of that ejaculation————I would not give a groat.

Is this, as F. R. Leavis once had it, “Irresponsible (and nasty) trifling”? Are death and comedy necessarily to be kept apart? In the i newspaper, the obituarist Oliver Holmey wrote of Forges, that “To him, life was a comic strip, and so was death” (1 March 2018). Many years previously, a young Kenneth Tynan, making a name as the foremost drama critic of his day, asked rhetorically: “If tragedy is worth a death, why not comedy too?”

Ian Campbell Ross is author of Laurence Sterne: a life (OUP) and is editor of The Life and Opinions of Tristram Shandy, Gentleman (Oxford World’s Classics). He is Emeritus Professor of Eighteenth-Century Studies and Fellow Emeritus of Trinity College Dublin.