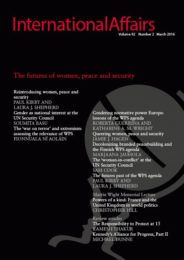 One year into President Trump’s administration serious questions are being asked about the nature and extent of the ‘crisis’ of the US-led liberal order, and its hegemonic state. The most fervent proponents of that order – liberal internationalists – are in varying states of despair. According to their Whiggish narratives, the order was supposed to be open, universal, prosperous for most, and integrative. After the Cold War’s end, the triumph of liberalism seemed all but certain. Though success bred its own international challenges, liberals were ready for them. China, India, and the rest of the BRICS, not to mention South Korea, Indonesia, Mexico, and Turkey (until recently), among others, continue to be seen as success stories of the order. Despite dark Realist mutterings of inevitable military conflict between extant and rising hegemons, liberal optimism remained. Until November 2016.

What is most shocking to liberals is that the significant threat appears to be at ‘home’, i.e., in the western heartlands: First, Britain voted to ‘Brexit’ the EU; then Trump defeated liberal-order champion Hillary Clinton. For the first time since 1945, a US President won office by attacking the principal relationships that are the very sinews of established order – NATO, American Middle eastern policy, East Asian security treaties.

President Trump’s “America First” foreign policy and a governing style favouring illiberal and racialized authoritarian-populism, rather than tolerance and diversity, is narrowing American identity around the macho (angry) white male, being restored after decades of ‘humiliation’ at the hands of “usurpers.” Women’s rights, civil rights, immigrants, and liberal elite social engineering that ‘emasculated’ the American white man, tampered with the constitution and under the banner of diversity changed the very face of America.

The ‘other’ is a Muslim, refugee, terrorist, Mexican immigrant, the unwanted African and Haitian – when the immigrants Trump wants look like Norwegians, a position applauded by white supremacists. A recent Gallup poll shows the effects – collapse in America’s global approval from 48% in 2016 to 30% today, just above Russia, slightly behind China and significantly trailing Germany (43%).

The levels of social and economic inequality at home – alongside the crisis of ‘immigration’ and forced migration – much of it driven by war, poverty and military violence – makes a lethal political cocktail that has bred and encouraged leaders promoting right-wing xenophobic populism, challenging liberal norms.

Yet, those crises may have been predictable given fault-lines fundamental to the liberal order. Some are inherent in an expansionist liberalism – spreading its democracy and market economics across the world, creating its own competitors and challengers in the process, leaving nowhere for American and other western states to export their crises.

Other crises occurred because the promise of the liberal order was unequally shared. The liberal world order turned out to be the West plus Japan and pro-US South Korea. Large parts of the ‘periphery’ (across Asia, Africa, and Latin America, for example) did not share in the liberals’ bounty. That post-1945 era sublimated its colonial-era racialised-imperial impulse – embedded in the distribution of power within international institutions and the terms of trade, as well as the extraordinary violence during the North American-Western European ‘long peace.’

For the first time since 1945, a US President won office by attacking the principal relationships that are the very sinews of established order – NATO, American Middle eastern policy, East Asian security treaties.

Yet the western ‘fix’ in the 1970s to the challenge of post-colonial nations’ demands for a New International Economic Order – leading to the export of capital to the global south through loans and investment in ‘middle class’ third world states, not only created competitors but also aided the industrial job-destruction process kick-started by automation: rust belt areas lost jobs and suffered socially. White working and middle classes drifted politically towards the Republicans, whose subliminal racialised appeals – against ‘reverse discrimination’, for example, nurtured a grievance at loss of position, viewed as others gaining unfair advantages over ‘real’ Americans. The seeds of the Trump triumph of 2016 were sown in the decline of the postwar social contract that initially fuelled Reaganism – and small government and low taxes conservatism. The wages of whiteness however delivered little in material terms to Reagan Democrats. And combined with globalisation and automation, their living standards fell, along with other large swathes of American society, as corporate wealth and political power increased.

President Trump’s ‘principled realism’ – sketched out in his inaugural address through the speech to the UN General Assembly in September, to his first National Security Strategy of December 2017, and General Mattis’s National Defense Strategy of January 2017 – is unilateral, selectively internationalist, and heavily militarised. It is also extractive, transactional, and based on American hard power. Trumpism is a kind of social Darwinism: unregulated corporate power with militarised policing at home; armed and dangerous states abroad eschewing diplomacy, loosening the bonds of international norms, underpinned by a survival-of-the-fittest mentality.

As his support erodes in practically all parts of the electorate, the legitimacy of American political and financial elite declines, and America’s global standing slips below China’s, Trump is pursuing a more militarist strategy against China and Russia – which he has labelled ‘revisionist’ powers, and closing down diplomatic pathways in dealing with major global crises. The growing threat of war, the downgrading of diplomacy and extolling the virtues of a global ‘national awakening’, augurs ill for the future of world politics, with strong undertones of worship of ‘strength’, ‘nation’ and ‘God’.

There is little room for soft power in Trump’s foreign policy; diplomacy has been side-lined in favour of military solutions. And America’s attitude to international organisations is ambivalent. Thus far, however, the effects have not fundamentally altered the international order – but President Trump’s withdrawal of the United States from the Paris Climate Accord, UNESCO, the Trans-Pacific Partnership, and selective engagement with other international institutions suggests a loosening of the international order created by Anglo-American power after World War II.

The title of a major report for discussion at the January 2018 meetings at Davos, based on a survey of global elite opinion, is ominous for the future of the international system: “Fractures, Fears and Failures.” The report’s subheadings include: “Grim Reaping,” “The Death of Trade,” “Democracy Buckles,” “Precision Extinction”, “Into the Abyss”, “Fears of Ecological Armageddon” and “War without Rules.”

Inderjeet Parmar is Professor of International Politics at City, University of London, and Head of the Department of International Politics. Parmar's latest book, Foundations of the American Century: Ford, Carnegie, and Rockefeller Foundations in the Rise of American Power was published in 2012 by Columbia University Press. and his current major long-term book project is entitled, Presidents and Prime Minister at War: Race, Elitism and Empire in Anglo-American Wars from Korea to the Wars on Terror. Parmar has held research fellowships at Oxford and Princeton universities, and he is a past President of the British International Studies Association. He is co-editor of a book series, Routledge Studies in US Foreign Policy. He is the author of "The US-led liberal order: imperialism by another name?", published in International Affairs.