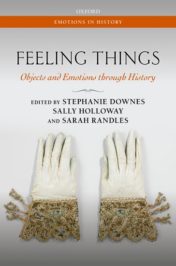 On the night of 8 June 2014, a section of the metal barrier on the Pont des Arts in Paris collapsed under the weight of thousands of padlocks which had been attached to it. Since the first decade of the twenty-first century, it has become increasingly common for famous (and sometimes less famous) bridges, and, increasingly, other monuments, to become encrusted with small padlocks in celebration of romantic love. The genesis of the practice is obscure, with a number of bridges claimed as the original site, but the ritual is generally consistent: an ordinary padlock is engraved or marked with the names or initials of a pair of lovers, and often a date. The lock is then attached to the structure of the bridge, and the key thrown into the water so that the unlockable padlock becomes a symbol of an enduring relationship.

The practice of depositing these ‘love locks’, as they have become known, has parallels with much earlier rituals. As public performances of emotion, they resemble the medieval practice of hanging votive offerings around the shrines of saints; the throwing of the keys into the water resonates with the ritual deposition of weapons, coins, and pilgrimage badges into rivers and wells from the Iron Age to the modern period. As with these, the ritual attaching of the lock and discarding of its key may represent not just a commemoration of love, but a way of empowering hope, or enacting a wish.

Love locks have been considered as contemporary examples of archaeological depositions and ritual behaviour, but here I want to approach them from the perspective of the intersection between the history of emotions and the history of material culture, in order to focus on them as ‘emotional objects’. Emotional objects are things which humans use to symbolise, express, produce, and regulate their emotions. In the process, objects can acquire, or lose, ‘emotional value’, which can be positive or negative, different for different people and groups, and can change over time. Such objects may become powerful, able to produce emotional as well as material effects. Often their materiality is essential to the way they function emotionally, but their emotional value may be unrelated to their economic or aesthetic values.

The most obvious way that love locks function as emotional objects is in representing romantic love. The small, cheap, usually quite unremarkable padlocks acquire emotional value in several ways — they represent the relationship between two people, and in many cases commemorate a significant date. In this sense they rely on memory and an existing relationship for their value. They also derive emotional value from their association with a particular place. Most of the sites where there are major accumulations of love locks are tourist attractions, which are places of significant beauty or historical importance. The locks serve to represent the lovers in these desirable places once they are no longer present, and the setting adds emotional value to the lock and to the ritual.

The material nature of the locks is integral to their use in this practice. They must be able to be secured to the structure of the bridge or other monument, and must be unable to be unlocked without their keys (or in some cases without the code for a combination padlock). But the sturdiness of the padlocks and another characteristic of emotional objects — their propensity to attract other, similar objects to themselves — has also contributed to their negative emotional value for some people. Collectively they threaten to overwhelm the monuments to which they are attached, both visually and materially. Civic authorities have attempted, largely unsuccessfully, to ban their use, or have resorted to cutting them off the structures. In some cases these measures have been prompted by a concern for the integrity of the structures and the safety of the people using them, but there have also been protests against the love locks on the basis of aesthetics, arguing that they destroy the visual appeal of the monuments which attracted the locks in the first place. The antipathy towards love locks has itself been expressed with emotional objects, including giant padlocks and hubcaps. Some cities have attempted to deflect the practice away from significant monuments by building custom structures for love locks. In Paris, the weight of the love locks forced a redesign of the railings on the Pont des Arts so that it would no longer be possible to attach locks to the bridge.

The removal of the locks from bridges, however, also prompted outcries, providing a testament to the emotional value of the padlocks, not just to those who deposited them, but to wider communities who have come to see them as a material and emotional enhancement to their cities. Even in their afterlife, the lovelocks have retained emotional value, which has led, in some cases, to their preservation. In Melbourne, concern for the integrity of the Southbank footbridge was matched by a concern for the materiality of the padlocks, so that they were not cut off, but rather slid from the support wires which were then replaced. Artists were commissioned to make objects from some of the lovelocks, ensuring their continued existence, and others were distributed via a lottery to raise funds for charity. The emotional value of the love locks now centred on a direct relationship with them as objects of desire, repurposed as representing the ‘heart of the city’, and a love which had shifted from eros to caritas.

Love locks may start out as small, quotidian, inexpensive, and not particularly attractive items, but through their emotional context, they can be transformed into powerful objects with the ability to change both the material and the emotional worlds around them. In doing so, they demonstrate the cyclic nature of the relationship between emotions and materiality: emotions produce objects, and objects produce emotions.

Sarah Randles is an Honorary Research Fellow in the School of Historical and Philosophical Studies at the University of Melbourne and an Adjunct Researcher in the School of Humanities at the University of Tasmania. She was formerly a Postdoctoral Fellow in the Australian Research Council Centre of Excellence for the History of Emotions. She is the co-editor of Feeling Things: Objects and Emotions through History, part of the Emotions in History series.