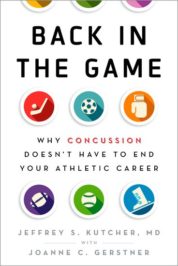 Back in the Game: Why Concussion Doesn't Have to End Your Athletic Career

The human brain is a wonder and a marvel. At the same time, it is enigma and frustration. Given all it has accomplished, it continues to perplex. This is why I became a neurologist. For me, combining the apex of all organic structures with the vast unknown of cerebral neuroscience produces a daily wonder that is worth dedicating a life’s work to. To that end, I find myself somewhere over the North Pole hurling towards PyeongChang, South Korea.

Four years ago, roughly, I was on a similar flight to Sochi, Russia for my first experience as a physician for the US Olympic Team. Then, despite all of the preparation, work, dedication, and sacrifice it took to be on that flight, I felt a degree of uneasy apprehension.

“The Olympics!” people would say when they found out why I’d be away from work and family for three weeks, “So amazing… what an honor!”

So, mid-flight jitters were created, mainly on the backs of others’ vicarious attestations. In the end, when faced with that same dichotomy of known vs. unknown and the responsibility of caring for the brain of another human, I fell back on what I first learned as a medical student and intern at Charity Hospital in New Orleans. Stay within yourself. Adjust to the unknown. First, do no harm. You may not have every answer in front of you or on the internet (which didn’t exist when I was at Tulane)… so solve the problem as best you can! These are valuable lessons for all physicians, to be sure, but even more so for neurologists.

These lessons served me well in Sochi, as a foundation wrapped in the premise that it doesn’t matter to the person you’re caring for whether they were hurt in an Olympic halfpipe, a neighborhood skate park, or a French Quarter misstep. In the end, it comes down to the same thing: understanding the brain well enough to appreciate the scope of its complexities while simultaneously having the humility and perspective to admit what you don’t know, expect to be challenged, yet still find a way to provide medical care to the best of your abilities.

In the past week, you may have already had the chance to watch some of the world’s best athletes do some truly amazing things. In the days to come, hopefully you can watch some more. When you do, take a moment to appreciate what is allowing them to perform, at the brain level. Wonder at how many neurons it takes to twist and flip an athlete while first they go skyward, their skis launching them up, and then continue their contortions as they come down again when gravity wins the day. Consider the cerebral networks involved in an ice-hockey game: the visuospatial, motor, cognitive, proprioceptive, balance networks (to name a few!). Marvel at what it takes to land a quad jump, have the reaction time and attention to navigate a downhill course at 90 mph, produce the fluidity of movement to win a gold medal in ice dancing. Dancing… on millimeters-thick razor blades!

Then stop and consider what happens when any one of those brains experiences a sudden stop, a deceleration caused by ice, or snow, or an opponent’s elbow. Normal physiological function is impaired if not temporarily halted. The eloquent firing of neurons, allowing each to participate in the formation of a purposeful network, is replaced by sluggish, inefficient recruitment. Inside the brain, the injury is obvious… if only one could be there or measure it! In the outside world, however, we rely on the clinical manifestations of the injury to guide diagnosis and management. Sometimes the clinical effect is obvious; other times it’s subtle. Still for others, although the injury is present, there is simply no clinical effect at all. The marveled married with the unknown. This is why I love what I do!

Tonight, from the Olympics standpoint, I have the advantage of experience and perspective, so no in-flight uneasiness this time around! From the medical perspective, however, in the weeks to come I’ll really be where I always am, practicing medicine in the intersection of reverence for human accomplishment and respect for the unknown.

Jeffrey S. Kutcher, MD, is an internationally recognized sports neurologist and pioneering physician researcher. He is a graduate of the Tulane University School of Medicine and the University of Michigan Neurology Residency program. He founded the American Academy of Neurology's Sports Neurology Section and was the neurologist for Team USA at the Sochi 2014 Winter Olympics. Dr. Kutcher is also a coauthor of Back in the Game: Why Concussion Doesn't Have to End Your Athletic Career.

Creativity, the brain, and society