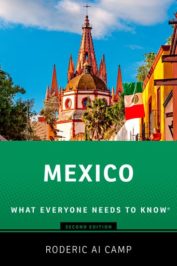 Mexico: What Everyone Needs to Know®

Mexico and the United States share a highly integrated economic relationship. There seems to be an assumption among many Americans, including officials in the current administration, that the relationship is somehow one-sided, that is, that Mexico is the sole beneficiary of commerce between the two countries. Yet, economic benefits to both countries are extensive.

Mexico has played a significant role in the rapid expansion of US exports in the 1990s and 2000s. It alternated between the second and third most important trade partner of the United States in the last decade. In 2014, the United States exported a total of $240 billion worth of goods to Mexico, with the largest  products coming from the computers and electronics, transportation, petroleum, and machinery sectors. By contrast, China only purchased $124 billion of US exports. Exports to Mexico accounted for approximately 1,344,000 jobs in the United States.

California alone, boasting the eighth largest economy in the world, exported more than 15% of its products to Mexico by 2014, exceeding what it trades with Canada, Japan, or China. As of 2014, Mexico’s purchases of California exports supported nearly 200,000 jobs in the state. In fact, 17% of all export-supported jobs in California, which account for a fifth of all individuals employed in the state, are linked to the state’s economic relationship with Mexico. More than half of those export-related positions can be traced to the North American Free Trade Agreement. California and Texas – the two largest economies in the United States, and two of the three largest state/provincial economies in the world – are significantly influenced economically by Mexico.

In 2014, a heavy portion of exports from six US states were purchased by Mexico: 41% in Arizona, 41% in New Mexico, 36% in Texas, 25% in New Hampshire, 23% in South Dakota, and 23% in Nebraska. As Senator John McCain noted several weeks ago, the Trump administration’s decision to renegotiate, rather than withdraw from NAFTA, prevented a horrific economic impact on Arizona. The GDP of the United States and Mexican border states accounts for a fourth of the national economy of both countries combined, exceeding the GDP of all the countries in the world except for the United States, Japan, China, and Germany.

Finally, Mexico also influences the US economy through tourism in the same way that American tourists play a central role in Mexico’s economy. In 2014, 75 million foreigners visited the United States, generating $221 billion dollars. Canada accounts for the largest number of visitors each year, followed by Mexico, which provided 17 million tourists in 2014, who spent $19 billion. Along the border, at the end of the decade, Mexican visitors generated somewhere around $8 billion to $9 billion dollars in sales and supported approximately 150,000 jobs.

Another way to look at the relationship between Mexico and the United States is through cultural influences.  Mexico exerts impact through music, food, film, and language. For example, there are multiple fast-food chains that spe­cialize in Mexican food. Grocery stores stock more items originating from Mexico than any other ethnic cuisine in the world, including beers, beans, hot sauces, peppers, and torti­llas. Corona is the best-selling foreign beer in the United States. Mexican foods such as guacamole and caesar salad are so com­monplace that they have lost their identity as Mexican cuisine.

The use of Spanish words and Mexican slang is evident in ev­eryday language in the United States; such terms range from “mano a mano” to “macho,” “enchilada” to “margarita,” and “rancho” to “hacienda.” According to a Pew Center study in 2011, 38 million individuals in the United States five years or older showed that the majority of them were Mexican, and were speaking Spanish at home. Spanish is also the most widely spoken non-English language among Americans who are not from a Hispanic country. The size of the Spanish-speaking audience in the United States has also influenced the growth of Mexican films. The musical influence has kept pace with cuisine. In 2010, the New Yorker magazine ran an extensive article about Los Tigres del Norte, a musical group from San Jose, California, who represent the norteño musical style. They boast a huge following among music fans. Selena, who died two decades ago, has sold more than 60 million albums, including songs representing the mariachi and ranch­era genres, and the number of copies of her posthumous best-selling album of all time, Dreaming of You, reached five million by 2015. Among young adults (18 to 34 years of age) who listen to the radio, Mexican regional music ranks seventh in popularity.

The relationship between the United States and Mexico has become more complex over time, incorporating cultural, musical, economic, familial, political, and security relationships beneficial to both countries and its citizens. But the most dramatic change in those many facets of our relationship with each other is the degree to which Mexico’s impact on and within the United States has grown in importance. Equally important to consider is that in spite of President Trump’s public criticisms of Mexico, our relationship at numerous levels, public and private, remains strong.

Roderic Ai Camp is Philip M. McKenna Professor of the Pacific Rim at Claremont McKenna College and serves on the Advisory Board of the Mexican Institute at the Woodrow Wilson Center for International Scholars in the Smithsonian Institution. His books include Politics in Mexico and The Metamorphosis of Leadership in a Democratic Mexico. He is also the author of  Mexico: What Everyone Needs to Know®.