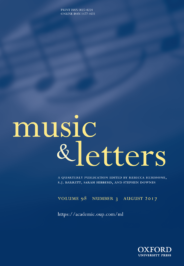 Music & Letters is a leading international journal of musical scholarship, publishing articles on topics ranging from antiquity to the present day and embracing musics from classical, popular, and world traditions. Since its foundation in the 1920s, Music & Letters has especially encouraged fruitful dialogue between musicology and other disciplines. It is renowned for its long and lively reviews sections, the most comprehensive and thought-provoking in any musicological journal.

Even by the standards of musical genius, George Enescu (1881–1955) was quite an extraordinary figure. A musician of a precocity that rivals Mozart or Mendelssohn, Enescu was equally proficient as a composer, performer, and teacher. Remembered nowadays primarily as a violinist, he numbers securely among the foremost instrumentalists of the twentieth century, though by all accounts Enescu was no mean pianist, and a very capable cellist besides. Distinguished colleagues such as Alfred Cortot, Pau Casals, Nadia Boulanger, and Arthur Honegger held his gifts in an admiration that bordered on awe. Evidence as to his conducting skills is preserved on a number of recordings in which he accompanied his young pupil Yehudi Menuhin (he was apparently in the running for chief conductorship of the New York Philharmonic in the late 1930s), and post-war radio broadcasts that have resurfaced in recent decades have lead to considerable critical acclaim. Enescu’s musical memory, meanwhile, was proverbial.

Numerous reports attest to his ability to memorise a new score at sight, and by his own account if left on a desert island with sufficient manuscript paper and a pen, he could have preserved the greater part of the Western musical repertory from memory. It was as a composer, however, that he really wanted to be remembered by others. As a teenager Enescu was writing works of thrilling complexity (witness the Octet for Strings, written at the age of eighteen), which already foreshadow the mature composer’s mastery of musical movement, the contrapuntal richness of his part-writing, and facility at varying his melodic ideas almost constantly throughout this fifty-minute work. When the Royal Opera House staged the composer’s magnum opus, the monumental opera Œdipe, at Covent Garden last year, the event caused quite a stir (“a masterpiece”, “spellbinding”, “truly one of the great operas of the 20th century” enthused the press). Just who was this neglected master capable of writing music of such power and refinement?

Enescu’s gifts and accomplishments were remarkable, yet he is not alone in failing to attain the international status his musical achievements would seem to deserve. Indeed, Enescu’s case is typical of a number of highly talented musicians of his generation, several of whom, like Enescu, hailed from central or Eastern Europe, who have largely been passed over in accounts of twentieth-century music and are only now emerging from relative international obscurity. One reason is geographical and political. As a native of Romania, Enescu has more or less inevitably become typecast to Western European audiences as an “exotic nationalist”, a purveyor of colourful folk-rhapsodies, appealing but ultimately “peripheral” (a fact not aided by the later political divisions of the Cold War). His most famous piece—the widely played and still highly popular ‘Romanian Rhapsody No. 1’—is after all just such a composition, and audiences are rarely given chance to hear any more of his music than this. Conversely, Enescu is understandably celebrated in Romania as a symbol of national pride: statues to the composer abound throughout the land, his birthplace, Liveni, has been renamed in his honour, a leading symphony orchestra is named after him while his name is likewise given to Romania’s showcase music festival, and his image (and music) can even be found gracing the common five lei banknote.

Yet in many ways Enescu is more international than national as a figure, both in training and outlook. The precocious child musician had left Romania at the age of eight to study first in Vienna and then in Paris, and for the majority of his life called the latter city his home (he is also commonly known under the French form of his name, Georges Enesco), returning to his native land as an adult for comparatively brief periods. Attempts by Western critics to marginalise him as different (or “other”), as with Romanian audiences to claim him as uniquely theirs, do him equally a disservice.

Secondly, familiar critical categories by which the twentieth century has sought to compartmentalise composers—as late-Romantics like Strauss or Mahler, as impressionists like Debussy, radical modernists like Schoenberg, and neo-classicists like Stravinsky—have little hold on his compositional output as a totality. If Enescu is not simply a Nationalist, he is no more a late-Romantic, an Impressionist, a Modernist, or a Neo-Classicist. Or rather, his music can show elements of all of these—and yet is something else. The richness and diversity of his musical oeuvre collapses such distinctions, leaving him outside our usual narrative framework for understanding its place in history.

How do we understand a figure like George Enescu? Or more specifically, how might we seek to promote such a composer’s music, to create more fitting contexts for understanding it and carving out a unique place in the landscape of twentieth-century music? One such approach may simply be to bypass the familiar, if not now hackneyed, historiographical terms, letting such compartmentalisations quietly rest, and instead listen more attentively to how the music appears to be operating. In particular, we might consider how Enescu’s music seems to be fashioned from a distinctive, if not highly idiosyncratic, relation to the concepts of time and space (an approach with notable precedent in an important recent account of musical modernity). This need not be understood in a manner divorced from history, from the composer’s own cultural surroundings, for he lived in a period in which these notions of time and space were being subjected to radical questioning. For instance, the philosophical thought of Henri Bergson and the debates that it stimulated in France around the time the composer was living there provide ample contexts for interpreting the dynamic, evolving quality of Enescu’s music, as equally the writing of Enescu’s compatriot Lucian Blaga, may prove useful in understanding the gently undulating lines and variative expanse of his art.

Such an approach may allow us to open up the customary narratives of music history in order to provide a conceptual space—a dwelling place as it were—for this most cosmopolitan and prodigiously gifted musician. Even more importantly, it might give some welcome attention to a still unsung but major figure of twentieth-century music, one whose achievements are just beginning to be appreciated now.

Benedict Taylor is the author of several books and articles on 19th- and early 20th-century music, including The Melody of Time (published by Oxford in 2016) and a study of George Enescu entitled "Landscape—Rhythm—Memory: Contexts for Mapping the Music of George Enescu" for Music & Letters. He teaches at the Reid School of Music, University of Edinburgh.