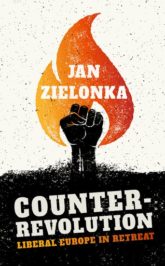 Several months after the fall of the Berlin Wall Ralf Dahrendorf wrote a book fashioned on Edmund Burke’s Reflections on the Revolution in France called Reflections on the Revolution in Europe. Like Burke, he chose to put his analysis in the form of a letter to a gentleman in Warsaw. The intention was to explain the extraordinary events taking place in Europe around 1989, reflecting on this turbulent period from his study at St Antony’s College in Oxford. Dahrendorf did not share Burke’s liberal conservatism and his book does not read like Burke’s political pamphlet. He saw a liberal revolution evolving in Eastern Europe and he tried to identify opportunities that this revolution created, as well as possible traps lying in its path.

Today we are witnessing an equally turbulent period in Europe, however heading in the opposite direction. Under assault are key pillars of the liberal revolution analysed by Dahrendorf: parliamentary democracy and free trade, migration and a multicultural society, historical ‘truths’ and political correctness, moderate political parties and mainstream media, cultural tolerance and religious neutrality; multilateral diplomacy and European integration. In essence: we are witnessing a counter-revolution.

I decided to reflect on this European predicament in a way (and location) Dahrendorf had done it three decades ago. Can open society survive? Is Europe disintegrating? How to overcome the economic crisis? Will Europeans feel secure again?

Why is this a counter-revolution? There are neither barricades raised on European streets nor sit-in strikes in factories. There is no singleideology inspiring and uniting protest movements. There is much talk about anti-politics, but those who lead the protest create parties and try to win elections. Yet, it would be a mistake to assume that revolution or counter-revolution must always involve mass mobilizations and violence culminating on a certain date. Communism collapsed with little if any violence. Poland’s Solidarity movement was able to organize mass strikes in 1980, not a decade later. Change came chiefly through pacts between old and new elites and through elections. And yet it is hard to deny that this relatively peaceful process changed Europe beyond recognition. History did not end, but the old order has gradually been replaced by a new one. Although some of the former communists were able to stay in power, they were able to do so only after endorsing the new liberal order. This is why Dahrendorf rightly called it a revolution despite all qualifications. And since he wrote his book in 1990 the revolution has greatly progressed.

The Soviet Union and Yugoslavia disintegrated, Germany has been reunited, and the European Union as well as NATO have been vastly expanded. Western armies, laws, firms, and customs moved eastward. Many people enthusiastically welcomed new regimes on their territory, but some felt disadvantaged either because of their ethnic background (e.g. Russians in Latvia, Serbs in Bosnia-Herzegovina) or because they lacked adequate professional skills to function in the new competitive environment. A long-standing balance of power in Europe had been effectively reshuffled. Russia soon began to see herself as an underdog, but also France found herself in a weaker position vis-à-vis Germany than before.

Geopolitical revolution has been followed by economic revolution. With the fall of communism some of its more universal ideals came under fire: collectivism, redistribution, social protection, and state intervention in the economy. This paved the way for neo-liberal economics to assume a dominant position throughout the entire continent, not just in Great Britain. Deregulation, marketization, and privatization became the order of the day even in states run by socialist parties. The private sector has subsequently expanded at the expense of the public sector. Markets and market-values moved into spheres that used to be the domain of the public sector in Europe such as health, education, public safety, environmental protection, and even national security. Social spending has been contained if not slashed altogether for certain disadvantaged groups. Even in countries like France or Spain, once home to powerful unions, less than 10% of the workforce is unionized now. Membership of Poland’s Solidarity trade union has fallen five-fold since 1989. Today less than 5% of Poland’s workforce is unionized.

Across Europe, politics was increasingly being presented as an art of institutional engineering, not as an art of political bargaining between the elites and the electorate. More powers were delegated to non-majoritarian institutions – central banks, constitutional courts, regulatory agencies – to make sure that “reason” rather than “passion” guided political decisions. Politics seen as giving in to public pressure was considered irresponsible if not dangerous. Majorities were said to spend money they didn’t  have, to discriminate against all kind of minorities, to support such ethically knotty causes as the death penalty or torture. Citizens were to be educated rather than listened to. The notion that public interests need to reflect public wishes has been questioned. Interests were said to be best identified by experts: generals, bankers, traders, lawyers, and of course, leaders of the ruling parties.

The EU with its enlarged powers following the 1991 Maastricht Treaty has been a prototype of a non-majoritarian institution led by “enlightened” experts largely independent from electoral pressures. True, the European Council consisted of democratically elected politicians, but the introduction of majority voting has made it difficult for member states to veto some decisions. In fact, national executives proved eager to bypass their respective parliaments by making decisions in the European Council.

Today this liberal legacy is under fire, not only in the post-communist democracies of Eastern Europe and indebted democracies of Southern Europe, but also in the most affluent European countries such as Austria, Finland, Germany, and Holland. This is because liberals compromised, if not perverted, many of their ideals. They refuse to look in the mirror and recognize their own shortcomings, which led to the populist surge across the continent. Populists have neither charismatic leaders nor credible programs; they are strong because liberals have been doing poorly for several years.

My response to Dahrendorf is that Europe and its liberal project need to be reinvented and recreated. There is no simple way back. Europe failed to adjust to enormous geopolitical, economic, and technological changes that swept the continent over the past three decades. European models of democracy, capitalism, and integration are not in sync with new complex networks of cities, bankers, terrorists, or migrants. Liberal values that made Europe thrive for many decades have been betrayed. The escalation of emotions, myths, and lies left little space for reason, deliberation, and conciliation. Another “valley of tears” is therefore ahead for Europeans. But there is a way out of the current European quandary.

Jan Zielonka is Professor of European Politics at the University of Oxford and Ralf Dahrendorf Professorial Fellow at St Antony's College. His previous appointments included posts at the University of Warsaw, Leiden and the European University Institute in Florence. He has produced seventeen books including Is the EU doomed? (Polity Press , 2014), Europe as Empire: The Nature of the Enlarged European Union (OUP, 2006), and Media and Politics in New Democracies: Europe in a Comparative Perspective (OUP, 2015). He frequently contributes articles to various European newspapers. He is the author of Counter-Revolution: Liberal Europe in Retreat.