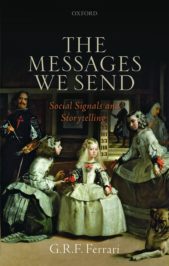 The Messages We Send: Social Signals and Storytelling

Consider the first of the two images on this page. It’s a photo of a young woman in Japan. She is wearing a recognizable look — in this case, the “French Maid” look. We might be tempted to say this girl is play-acting with her clothes. But let’s be clear that this is not the same as wearing a costume on stage or screen; the girl is not turning herself into a ham-actor, as people do at fancy dress parties. An actor in a drama is taking part in a fiction. The audience, as they follow the plot, draw their inferences from the actions of the character the costumed actor is depicting. But for spectators of the “French Maid,” the inferences will be about the action of wearing that particular look, much more than about the imagined action of the character suggested by the look. This young woman is sending a message about herself; she is intimating group affiliation and something about her character and tastes.

Now consider the contrast between the first and the second of the two images.  The second is a photo of a “cosplayer” dressed in character as a girl-warrior. (Alas, the photo is uncaptioned, so I cannot tell you which girl-warrior.) “Cosplay” is short for “costume play”; players dress up as a favourite character, typically a fictional character taken from manga, comics, anime, or computer games. Cosplayers gather for photo and video shoots and compete at formal events, where they strike poses suited to their chosen character. Differently from the “French Maid,” their costume play represents a particular character rather than just a style.

There is still a difference, though, between what the cosplayer does and what an actor in a movie does. Cosplayers use only their appearance to evoke the imagined action of the character they play; they strike poses, but those poses do not make up a story. At some competitions, admittedly, cosplayers may perform brief skits or mimes in character. None of this amounts to a story, but it does resemble what a guest at a fancy dress party might get up to — and I compared that behaviour to the performance of a ham actor. Some cosplayers, then, do at times cross the line and turn themselves into actors. But the essence of the practice seems rather to consist in costuming yourself for the perfect character-pose.

What, then, are the inferences generated in an audience by that core practice?  On the one hand, because there is no story to follow, they are, in their way, inferences about the action of wearing that particular look, as with the “French Maid.” Those in the know will recognize which fictional character the player is evoking and judge the player’s skill in reproducing and realizing the look of that character. Despite the vividness of the reproduction, the audience continues to draw its inferences from the actions of the person playing the role, rather than directly from the role being played. The player does not disappear into the imagined action of a story as an actor would.

On the other hand, there is an aesthetic simplicity, a wholeheartedness to cosplay that is absent from our “French Maid’s” style. However devoted she is to perfecting her style, she is also sending a message about herself (which, too, is a good thing in its own way). Cosplayers, by contrast, I’d say are not out to intimate something about themselves, or, for that matter, about anything else. Cosplayers are dressing primarily for beauty, or at least for visual impact. They are out to capture the sheer excellence of a very particular look — the look of a known fictional character. Of course, which character they choose to reproduce implies something about their enthusiasms and helps them meet fellow enthusiasts. But to say that this is the point of their efforts would be like saying Monet’s paintings of water-lilies were made to show the world his enthusiasm for gardening and to score an introduction to the local horticultural society. No: instead, cosplayers are aiming to perfect the pure art of dress-up. Their art is pure in the sense that it is free from the need to send messages, to make meaning. Its beauty is delightfully meaningless.

To be sure, some people in their ordinary, daily lives strive to make an art of dressing themselves, guided by an eye for beauty. You don’t have to be a cosplayer to have this ambition. And dressing purely with an eye for beauty—dressing in a way that is satisfying to the senses, flattering to the form, and constitutes an exercise of intelligence—is not something people do in order to send a message. They will surely want to satisfy the viewer as well as themselves, and they may also want the beauty of their outfit to impress or even to astound. But effects like this are a matter of using your clothes to get others to feel a certain way; and that is different from using your clothes to get something across to others.

But dressing as an art can almost never be aesthetically wholehearted. That’s because an actual life, the life of the clothed person, is crucially involved. To dress yourself is inevitably a matter of choosing, say, a jacket where you might have chosen a cardigan, décolletage where you might have chosen a turtleneck. It’s to choose a look; and the look will trigger inferences about the actual person wearing the clothes. It can’t simply be to choose beauty—not unless you take extraordinary measures. Cosplayers take those measures. For the rest of us, sending messages with our clothes—intimating something about ourselves or about the situation in which we find ourselves—will be a normal part of why we wear clothes in the first place.

G. R. F. Ferrari, University of California, Berkeley, Melpomene Professor of Classics. G.R.F. ("John") Ferrari has been a professor at the Department of Classics at the University of California, Berkeley, for over twenty-five years. His principal interests are in philosophical aesthetics and in ancient Greek philosophy, especially Plato. Ferrari is the author of The Messages We Send.

Stan Lee on what is a superhero