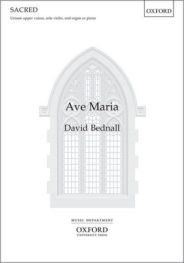 We like to get an insight into the musical lives of Oxford composers by asking them questions about their artistic likes and dislikes, influences, and challenges. In part 1 we spoke to composer David Bednall in August 2017 about what motivates him, and how he approaches a new commission. Here he tells us why he wanted to be a composer, the challenges he faces, and his musical guilty pleasures.

Tell us about one of your proudest moments.

Working with Jennifer Pike and Benenden Chapel Choir under my great friend Edward Whiting on Stabat Mater is certainly up there, as was writing my BBC Commission for the Hull City of Culture Festival 2017 (performed by James Gilchrist, Philip Dukes, and Anna Tilbrook). Another was hearing performances of my 40–part motet, Lux orta. Perhaps the proudest moment of all was being at the premiere in Gloucester Cathedral of the Nunc dimittis that I wrote to accompany Finzi’s Magnificat. Gloucester Cathedral is probably the most important place on earth for me in terms of music. Finishing my first Times Crossword was one of them as well!

Which of your pieces holds the most significance for you?

Hard to say – there are a number of “staging posts.” My milestones are probably Missa Sancti Pauli, Requiem, Welcome All Wonders, Stabat Mater, and Lux orta. Some of my other pieces, written about someone close to me, have great personal significance.

What or who has influenced you the most in your life as a composer?

Herbert Howells and Vaughan Williams, without a doubt. I consider Beethoven to be the greatest composer who ever lived, and I would not be one without Wagner or Puccini. In terms of people I know, David Briggs, Malcolm Archer, and Dr Naji Hakim are those who most formed my musical personality, and Professor John Pickard (who was my PhD Supervisor) has had an immense impact on my approach to composition. None of this would have happened at all without my parents, of course, whose love and support have been constant and absolute. They, along with other family members and friends, have sat through many hours of concerts in freezing buildings on hard chairs over the years. I’m immensely grateful to them all.

I think composing gets tougher as you progress in your career for two main reasons. Firstly, as bands always say, you have a lot of time to make your first album and a lot less for the second. You have many ideas when first starting out and usually pour them all into every piece. I don’t like repeating myself, so I try to avoid doing so whenever possible which makes thinking of new ideas inevitably tougher. Secondly, your own standards become more and more stringent as you begin to demand more of yourself. You also have the challenge of living up to earlier successes and this spurs you on, I think.

What made you want to be a composer?

My first piece of serious writing was Behold O God Our Defender, which was written the day after the 11 September terrorist attacks in the US. My call to be a cathedral organist came while listening to Howells’s Collegium Regale Te Deum. At the word ‘comforter’ I had the call!

Being an astrophysicist was on the cards for a long time. I also quite fancied law, and possibly forensics.

Is there an instrument you wish you had learned to play, and do you have a favourite work for that instrument?

Viola, probably. Vaughan Williams’s Flos campi is the last piece I would like to hear before I pass, if it is possible. I am totally in love with the instrument, and have been fortunate to work closely with Philip Dukes, who played the solo viola part in my Requiem.

What would be the top three pieces on your desert island playlist?

Howells: Hymnus Paradisi, Wagner: The Ring (can I have that?), and Vaughan Williams: Flos Campi. I’d want to take an Oasis album as well . . . And Beethoven’s Missa Solemnis would be sorely missed.

I’ve strived for clarity more and more, and also tried to keep things “thinner” if that makes sense – less is more. This doesn’t mean any less richness of harmony, but I’m always considering whether it’s possible to create the same effect without simply resorting to thicker chords. I am also more interested now in avoiding the constant “vertical” (which seems to be a feature of a lot of music these days) by trying to incorporate a strong contrapuntal element.

What was the last concert you attended?

It was a concert entitled “Untune the Sky: A Hymn to St Cecilia” performed in Clifton Cathedral, Bristol by the choir of a friend of mine; it was very beautiful. The last major performance I went to was Verdi’s Otello at the Royal Opera House with Jonas Kaufmann in the lead role.

Which composer, dead or alive, would you most like to meet?

I would like to have met Howells, and to have been in a room with Wagner once – he was (in my opinion) obviously a bizarre and in some ways deeply unpleasant person, but I would love to have seen the charisma in action. The composer I would most like to have met though would undoubtedly have been Ralph Vaughan Williams – a genuinely great man as well as one of the greatest of composers.

What do you listen to as a “guilty pleasure”?

The Beatles, Oasis, Led Zeppelin, and the Rolling Stones don’t count! ABBA, Meat Loaf, and a fair bit of 80s pop. I don’t suffer any guilt though!

David Bednall is Organist of the University of Bristol, Sub Organist at Bristol Cathedral and conductor of the Bristol University Singers. He has a busy career as a composer.