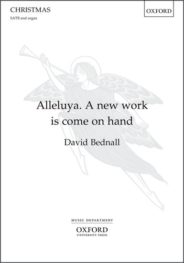 Alleluya. A new work is come on hand

David Bednall is Organist of the University of Bristol, Sub Organist at Bristol Cathedral and conducts the Bristol University Singers. He has a busy career as a composer and has published many works. In this occasional series we ask Oxford composers questions based around their musical likes and dislikes, influences, and challenges. In the first of a two part Q&A we spoke with David about his typical day, his composing habits, and his most difficult work to write.

What does a typical day in your life look like?

This is very difficult to answer! They are very varied. I’m not a morning person, so my days do not usually end up starting very early… I like to get through the letters, arts, and cryptic crosswords sections of the papers with breakfast and a huge mug of tea in the mornings. What I do next will then depend entirely on whatever else is on that day. I am often teaching at Bristol University, playing for evensong at Bristol Cathedral, or doing something else musical. I like to have a walk around the city each day, and I try to be in bed for Sailing By and the Shipping Forecast.

What do you like to do when you’re not composing?

I’m a keen fan of music across the spectrum, so even when I’m not composing I may well be practising, reading about music, or getting to know pieces better. I’m also a great fan of TV Detective Series and box sets. Inspector Morse is an all-time favourite along with The Sopranos, and I’m currently working through The Wire. I’m interested in current affairs so try and keep up with the world, and I like to read New Scientist each week to find out what’s new. Reading is also a hugely enjoyable pastime for me.

What is the most difficult piece you’ve ever written and why?

I would say that each piece presents its own difficulties. The toughest in some ways was my 40–part motet Lux orta, which was written for Tom Williams and Erebus for the Bristol Proms 2015. The sheer size of the forces was a challenge in itself, and then were the practicalities of writing out the music (it takes several minutes to simply write a tutti chord with this many voices!). In addition, my hope that Lux Orta would be rehearse-able in a short space of time and prove to be a useful companion to Tallis’s Spem in Alium provided further difficulties. I spent a lot of time studying Spem, of course, and also Gabriel Jackson’s Sanctum est verum lumen before drawing up a big series of maps to decide what I was going to do and how I might go about it. It all seemed to happen, but involved a fair period of sleepless nights when I could think of nothing else – I even walked around town counting ‘alleluias.’ My Stabat Mater, from a similar time, was also very difficult to write as the length of the text makes it very difficult to do justice to; I really wanted to make a ‘whole’ out of the piece so that it hung together over the near hour of its duration. The writing of these pieces is certainly one of my proudest achievements.

What is the most exciting composition you’ve ever worked on and why?

The above two, and also the Nunc dimittis that I wrote to accompany Finzi’s Magnificat. It is really an extended love letter to Finzi, and I was so deeply honoured to be asked to do this work. I adore Finzi, so it was lovely to write this piece and be permanently associated with him.

What is your inspiration/what motivates you to compose?

I tend to need a deadline to really get down to work. With choral music the inspiration is always the text, and I’m motivated by the desire to do this text as much justice as possible in my setting. When I don’t have a text to set, I often like an image to work towards (I usually want to try and work out a title before moving forwards with the writing). The countryside of Gloucester and my native Dorset are important, and also the sounds of voices in cathedral spaces.

How do you prepare yourself to begin a new piece?

If it’s a choral piece I write the text out by hand in fountain pen, as I find this helps me consider and feel closer to the words. I try and think a lot about the kind of piece and the kind of effect I want to create before writing. Lots of tea and procrastination mark the following stage, and then after that I begin composing at the piano. I write everything in pencil and use Sibelius only at the last stage – the working by hand is essential for me.

How do you begin to approach a new commission?

Much the same as above, but I would try to carefully consider the type of piece and the forces available for it. I never try and dumb down, but if it is a small amateur choir looking for a useful piece to do frequently then I would want to try and write differently to a commission for an expert group who want me to write them a showpiece.

Do you treat your work as a 9-5 job, or compose when you feel inspired?

Very much when inspired – 9 is not a time I really ever use!

What does success within a composition look like to you – how do you know when to stop editing a piece and that you’ve reached the end?

I think it is fine to do some tweaking after you first hear your piece played or within a short time frame. If you continue doing so long after the event, however, then you are almost tampering with someone else’s work. I likened it in my PhD commentary to going through a family photo album and trying to remove embarrassing hairstyles and jackets – you have to accept them for what they are. If something doesn’t work in terms of scoring, say, then that is different, but you can often end up changing things for the worse. That said, you do get stricter with experience and feel that every element of a piece needs to ‘belong.’ Overall, it’s important to leave a work or you never move on – making a recording is often a good opportunity to force yourself to leave it, I think.

David Bednall is a renowned organist and composer for Oxford University Press. His latest work is Alleluya. A new work is come on hand.